MIA is the busiest gateway airport of the Americas, serving 79% of all passengers between the U.S. and the LAC region, pointed out Miami-Dade Aviation Department Director and CEO Lester Sola, in his opening remarks.

ACI-LAC, the only professional worldwide association of airport operators, represents 60 airport operators and over 270 airports in 32 countries of the Latin America and Caribbean region. The organization’s airports handle 95% of commercial air traffic in the area and represent over 584 million airport passengers, 5.1 tons of freight and more than 8.7 million aircraft movements each year.

The Conference was kicked off by a slate of government and aviation officials, including Miami-Dade County Mayor Carlos A. Gimenez; Miami-Dade Aviation Department Director and CEO Lester Sola; ACI-LAC Director General Javier Martinez, Chairman of the Board of County Commissioners Esteban L. Bovo, Jr. along with Bongani Maseko, ACI World Chair and Martín Eurnekian, ACI-LAC President and CEO of Corp. America Airports. 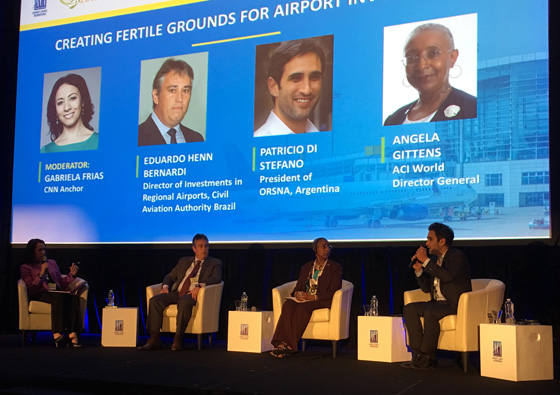 The key theme of the conference was how aviation will handle the projected doubling of passenger traffic that is forecast by 2040, in terms of airport infrastructure and capital investment, passenger experiences, leveraging technology, and air cargo.

With Argentina still registering the fewest air passengers per capita in Latin America, following decades of no development, the admiration has embarked on an ambitious program to modernize 90% of Argentina’s operational airports between 2016-2019.

Di Stefano and Gittens next joined Eduardo Henn Bernardi, Director of Investments for Regional Airports in Brazil, on a panel moderated by CNN anchor Gabriela Frias for a lively discussion on airport investments.

The afternoon sessions focused on passenger experience, and included a panel discussion in which IAADFS President & CEO Michael Payne participated