Aeropuertos Argentina 2000 (AA2000) has held the concession to manage the principal airports in Argentina since 1998. Controlled by the powerful Buenos Aires based conglomerate Corporacion America, which is owned by Argentine entrepreneur Eduardo Eurnekian, AA2000 is part of a group that manages airports in Italy, Brazil, Ecuador, Italy and Armenia. In Argentina, AA2000 controls more than 90% of commercial air traffic and looks after more than 30 million passengers per year. Most of these passengers pass through the two big airports in the country’s capital Buenos Aires – Aeroparque, Argentina’s biggest airport for domestic travel, and Ezeiza, the leading international gateway in the country. John Gallagher reports from Buenos Aires.

AA2000 and Corporacion America, along with the Argentine government, announced in March a major renovation plan for Ezeiza International Airport which will prepare the airport for further growth. The 15 billion Arg. Pesos (approx. US$ 750 million) project will create one of the most modern airports in the Americas.

The airport will also be able to receive four times as many aircraft and will feature a new air traffic control tower. Renovations have been ongoing at Ezeiza for several years but this new project, already under way, will continue through 2020. 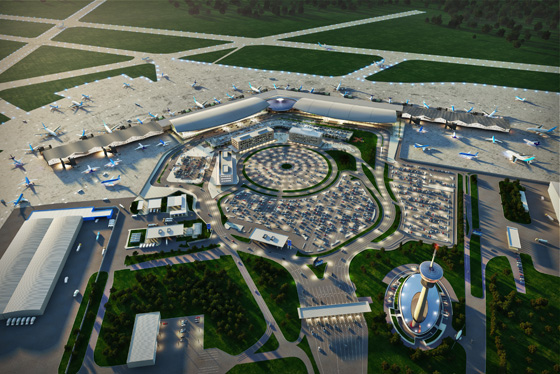 Rendering of the expanded Ezeiza International Airport under construction by operator AA2000, Corporacion America, and the Argentine government.

Travel Markets Insider met with Daniel Ketchibachian, AA2000 CEO at Ezeiza International Airport, to discuss the future of the airport, where the terminal will be expanded from just over 58,000sqm to more than 217,000sqm. The redesigned airport will feature 52 gates from the current 27, with a totally refurbished check-in area incorporating over one hundred self-check-in units.

“The new departures terminal, which will measure just short of 40,000sqm, will centralize all departures, and ensure an efficient and comfortable experience for arriving passengers. The objective is to create a great airport for passengers. The air traveler is very important to us and we want him to be comfortable and have a pleasant stay before he leaves or when he arrives. The airlines are also important, and we talk to them on a regular basis to ensure that any changes we carry out will allow them to become more efficient.”

Ketchibachian took over the top post at Ezeiza just over a year ago, after spending almost six years in Brasilia running the Inframerica operation, the Corporacion America business unit that manages Brasilia and Natal airports. In Ezeiza he has followed a similar strategy that he adopted in Brazil.

“Basically, we have taken a detailed look at what we do – the things we do well will remain, the things we do badly will be changed. Innovation will be important, and we will bring a lot of new ideas and new concepts to improve the passenger’s experience,” he explains.

“As part of the renovation process we will be making changes to the services we offer the passenger. The commercial offer will be vastly improved and when we talk about commercial we are thinking not only about retail but also about food and beverage.“

Duty free will be central to the commercial offer, Ketchibachian adds, “We have a great relationship with Dufry, our anchor duty free retailer, and we have been talking closely with them to ensure that our duty free shop will be one of the best in Latin America.”

AA2000 is working with Portland Design of London – which worked with the group in Brasilia — to develop the new commercial offer at Ezeiza.

“The greatest part of the new commercial offer will be located in the connecting building that will link the new departures area to the new arrivals terminal. The duty free store in departures will be more than double the size of the current store when we finish the whole development in the connecting building. Dufry is preparing something very special and we really feel that the new offer will be very well appreciated by the Ezeiza airport user,” says Ketchibachian.

Food and beverage will play a major role in the renovated airport. “Many people do not have access to the VIP Lounges and in the past the offer has not met the travelers’ expectations, neither with the range of the offer or the pricing. The F&B proposal will be totally renovated. Several different segments use the airport – frequent travelers, some first-time travelers, people with high incomes, people with less cash to spend – and we must appeal to all segments to ensure that we can maximize our revenues.”

The expanded modernistic terminal at Ezeiza will offer double the space for duty free in the departures area.

Ketchibachian says that passengers will begin to see the new offer at the end of this year, when AA2000 will introduce several international brands along with strong Argentine brands to ensure that Ezeiza does not lose its sense of place. Pricing will be in line with similar outlets in Buenos Aires city center.

“We as the landlord will make sacrifices and we are sure that overall revenues will be in line with expectations.”

Under Ketchibachian, AA2000 has implemented a continual dialogue with all the players involved in making the airport work, conducting regular meetings with Immigration, police, airlines and commercial players.

“We want to make sure that problems are solved quickly. On the commercial side, if we can solve problems quickly the duty free shop operator, the retailer, or the restaurant concession holder will improve revenues. If they improve revenues so does the airport. Additionally, if there are no problems the traveler enjoys the airport experience, and this is always positive.”

Ezeiza is already reporting better traffic figures this year (+9.9% first six months). New routes and increased frequencies tell part of the story but the increase is also partly due to a government decision to relocate regional flights away from Aeroparque, which will become solely a domestic airport. From next year, the only international services from Aeroparque will be to Montevideo and Punta del Este.

Ketchibachian says that Ezeiza has already assumed more than half the flights to Chile, Brazil and Paraguay and the remaining 50% will change over to Ezeiza in April, 2019.

“Regional passengers need to be looked after in the same way as long-haul passengers and we feel we will be able to meet their needs in every way. Brazilians make up the biggest foreign group in the airport and recently we have established a number of Brazilian-friendly measures to accommodate their needs.”

Ketchibachian is also confident AA2000 will be able to meet the needs of low-cost carriers as they begin to operate in Argentina.

“Some of the new airlines will use El Palomar, the new terminal on the west side of Buenos Aires. Others will use Ezeiza. Sky Airlines already operates several flights per day to Santiago in Chile and Level operates a regular service to Barcelona in Spain, both from Ezeiza. Later this year we will see the first flights from Swiss carrier Edelweiss to Zurich.

“One of the major factors with low cost aviation in Latin America is that no one is sure what the traveler will want when he arrives at the airport. Some of the passengers are business travelers, some are leisure passengers, some are frequent travelers, and some have never flown before. As low-cost services grow, we realize we must continue to study the needs of all the passengers in order to offer them the services that they require.”