Airports Council International – North America (ACI-NA) President and CEO Kevin M. Burke has called for immediate action to improve U.S. airport infrastructure following the release of a “D” rating for the state of America’s aviation infrastructure by the American Society of Civil Engineers (ASCE), on March 9.

Burke’s call to action comes just two days after ACI-NA released a study detailing the scope of airport infrastructure needs and projects, including those projects not eligible for Airport Improvement Program (AIP) grant funding. ACI-NA estimates that U.S. airports have a collective funding need of $99.9 billion over the next five years, or nearly $20 billion per year, to begin these projects.

The study finds that 63% of the increase in infrastructure needs will come from passenger and cargo growth, with 30% attributable to the need to continually maintain a good state of repair for aging airport facilities.

•Small hub airports, accounting for 8.4% of all enplanements, account for $8.5 billion of total airport infrastructure needs, up 35.4%.

ACI_NA says that the overall increase in airport infrastructure needs reflects the fact that a recovering economy and increasing traffic demand, coupled with airline consolidation and their strategic shift to focus on hub operations, require large and medium hub airports to invest in major infrastructure improvement projects.  Despite a decrease in flights at many small airports, additional funding is still needed for upgrading aging infrastructure, meeting federal mandates, and improving the passenger experience.

Burke went on to say: “With nearly $100 billion in infrastructure needs over the next five years, America’s airports are at risk of losing their position as leaders in the global aviation system.  As today’s report card by the American Society of Civil Engineers demonstrates, we must act quickly to get Washington out of the way and eliminate the outdated federal restrictions that hold America’s airports back.” 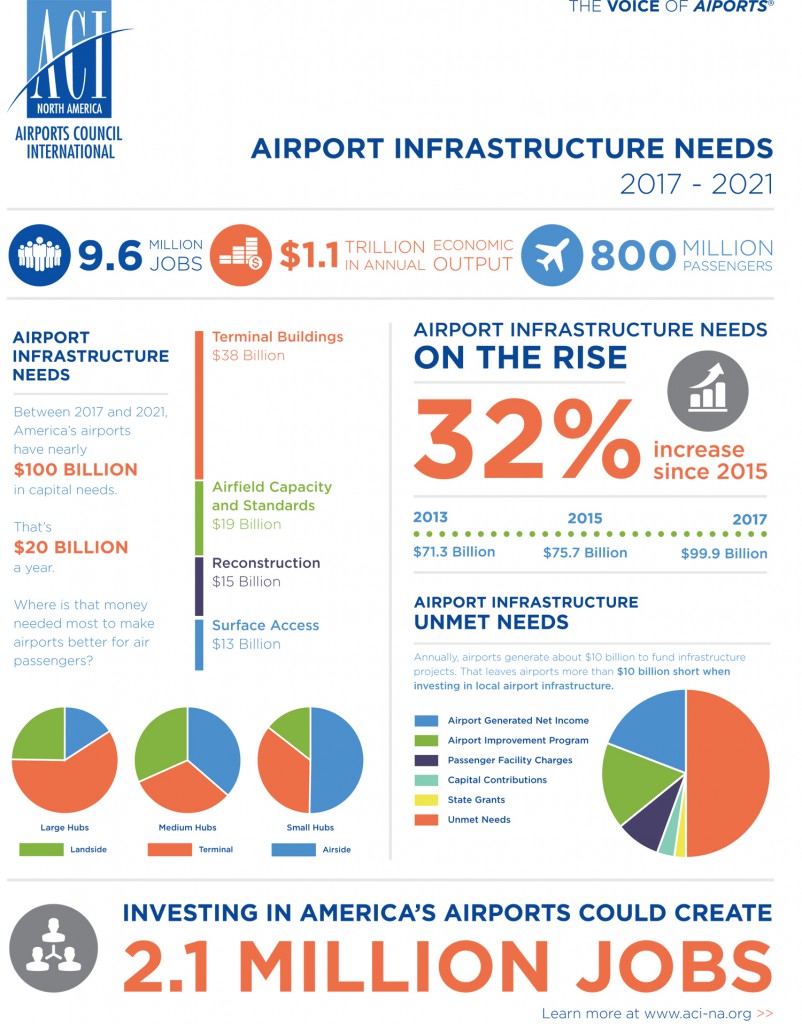