Airports Council International’s latest PAX Flash reports that global passenger traffic grew 4.5% in June 2016 and 5.6% in the first half of 2016.

The lower than expected growth rates during June 2016 in international traffic in Europe and the slowdown in the Middle East testified to the fragile and uncertain economic conditions, political instability and passenger sensitivity to the wave of terrorist attacks. These events weighed on travel confidence and air transport demand.

Nevertheless, except for Africa where the drop in passenger traffic was apparent and anticipated

(-4.4% year-to-date), all regions posted growth in passenger volumes, ranging from 1.7% in the recessionary Latin America-Caribbean region to the buoyant Asia-Pacific and Middle East regions, which both grew strongly at 8.8% on a year-to-date basis. The mature markets of Europe and North America both grew 4.9% during the first half of the year.

Mexican airports in particular benefited immensely from the American economic recovery that coincided with the expansion of routes by airlines serving major destinations in Central America.

In the first six months of 2016, major Brazilian airports recorded unprecedented traffic loss of 8.4%, which was barely offset by the strong passenger traffic growth in Mexico (+10.5%) and Colombia (+6.9%).

Both international and domestic passenger traffic growth was significant in Mexico at 8.5% and 11.8% respectively, as measured at 33 commercial airports. This made Mexico one of the most promising emerging aviation markets.

All major commercial airports in Brazil reported traffic losses, testifying to the severe nature of the economic crisis in the country. Brazilian GDP is projected to decrease 3.3% in 2016, according to the IMF.

After years of consolidation and capacity discipline on the part of US-based airlines, North America experienced a resurgence in air transport demand, particularly at many of its mega hubs.

Growing 5.5% YOY in passenger traffic to a record-breaking total of over 100 million passengers in 2015, Hartsfield-Jackson Atlanta International Airport (ATL) benefited tremendously from its strategic location as a major connecting hub and port of entry into North America.

The 5.0% growth rate in passenger volumes at major commercial airports in North America over the course of six months was equivalent to an additional estimated 43 million passengers, demonstrating the scale of air transport industry in the region.

This was consistent with the macroeconomic climate differences. According to the IMF, 2016 GDP growth is projected to be 2.2% in the United States and only 1.4% in Canada. 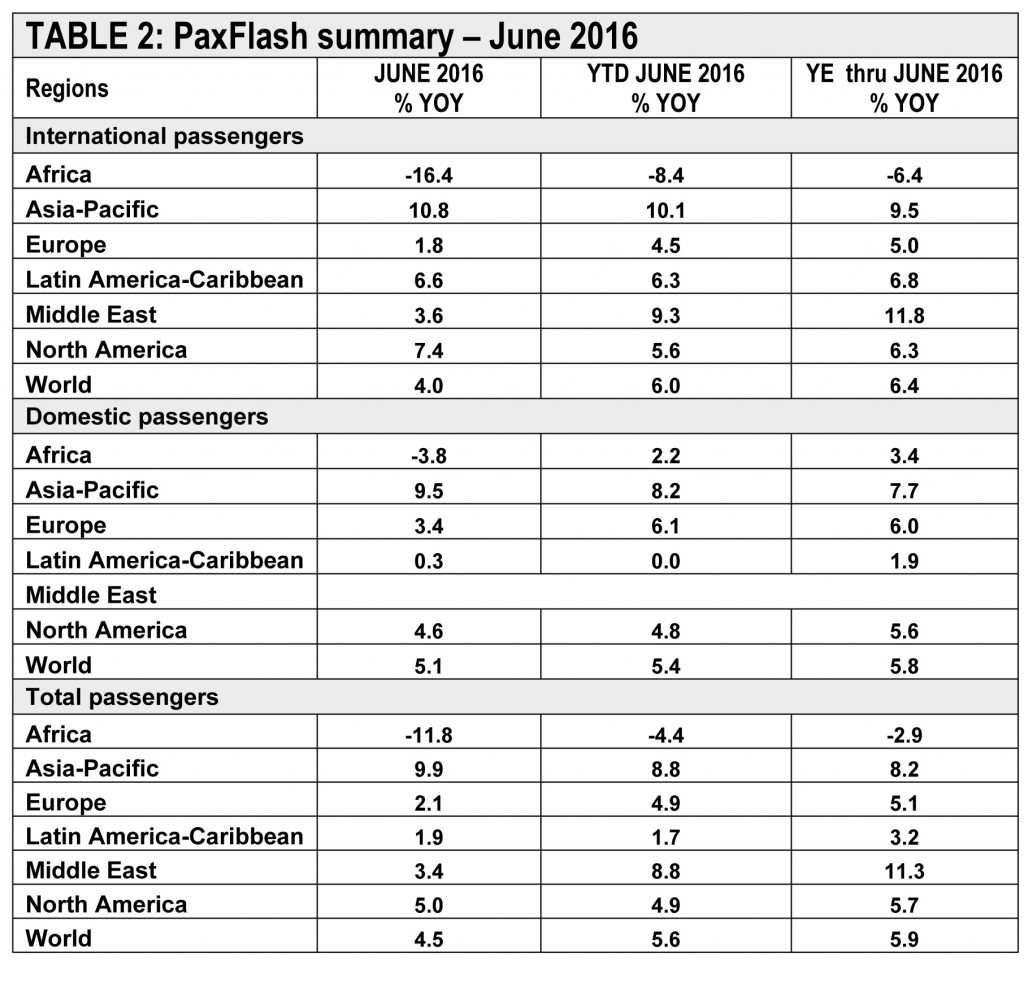