Airports Council International (ACI) World has published its fifth COVID-19 economic impact analysis, which reveals the devastating effect on the airport industry and the prospects for recovery. The study developed several scenarios exploring the potential recovery trajectory and, under the baseline scenario, domestic passenger traffic is expected to recover to 2019 levels by 2023 with international passenger traffic recovering in 2024.

In a worse case scenario, ACI World predicts that in the long term, global traffic may take up to two decades to return to previously projected traffic levels. 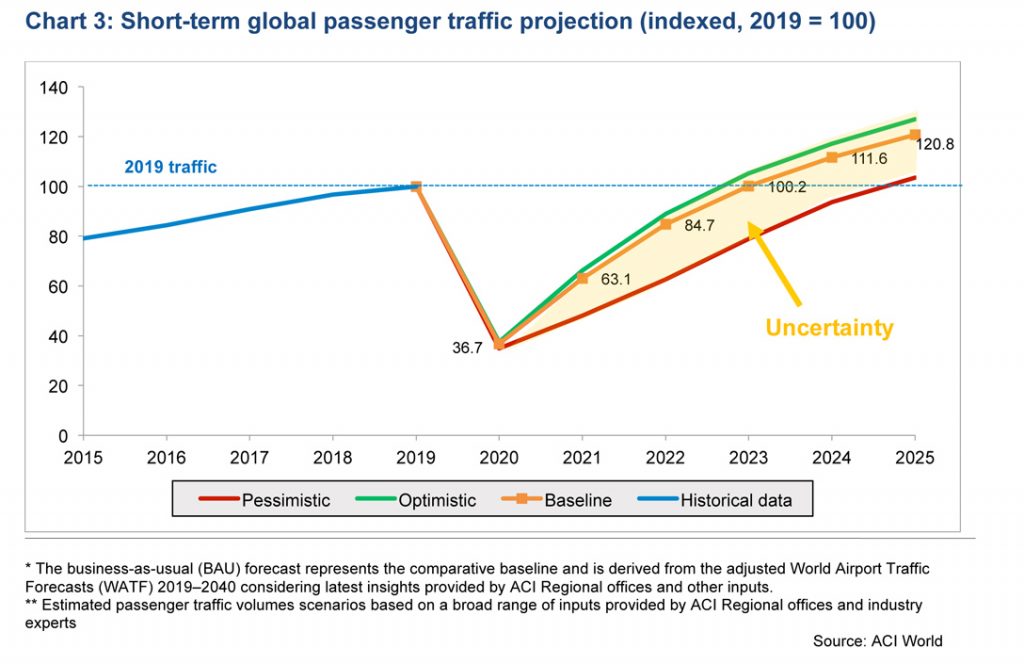 The Advisory Bulletin, The impact of COVID-19 on the airport business, indicates that the global airport industry will record a reduction of more than 6 billion passengers by the end of 2020 compared to the pre-COVID-19 forecast for 2020, representing a decline of -64.2% of global passenger traffic.

The second quarter of 2020 posted the worst losses with a global decline of 89.4% or more than 2.1 billion passengers. The month of April recorded a decline of 94.4% compared to the same period in 2019.

Europe and the Middle East are predicted to be the two most impacted regions – with declines above -70% compared to the projected baseline. Asia-Pacific began recovery earlier and faster than other regions and is forecast to close the year 2020 with a decline of -59.2%, which was driven by large domestic markets such as China. Asia-Pacific is the only region recording a decline below -60%.

* Global passenger traffic in the first half of 2021 will remain heavily impacted as vaccination campaigns are rolled out and organized. Major logistical challenges will need to be addressed mainly related to cold chain logistics and distribution capabilities. Air cargo capacity, and belly hold cargo capacity in particular, was severely reduced as the number of passenger flights fell which could drastically hinder the distribution of the vaccines.

*International passenger traffic continued to be virtually non-existent in the second half of 2020 following the “Great Lock-down” of April. International passenger volume will remain weak in the first half of 2021 but will pick up in the second half of the year as an increasing number of people get vaccinated, and travel restriction are gradually removed.

*Domestic passenger traffic is recovering faster than international traffic. Countries like China and Russia have already returned to their 2019 levels. Globally, domestic traffic will continue to increase in 2021 to reach 2.35 billion passengers in the second half of 2021 corresponding to 86.5% of the 2019 level for the same period.

The airport industry was expected to generate about $172 billion this year but the COVID-19 crisis impact on airport revenues will result in a reduction of $111.8 billion (or -65% compared to the pre-COVID-19 forecast).

The biggest passenger traffic losses were recorded in the second quarter of 2020 with a reduction of $39 billion in revenues compared to the projected baseline (-89.7%).

Europe is the most affected region in absolute terms with an estimated revenue shortfall of $40.8 billion for 2020. In relative terms, the sharpest fall was recorded by the Middle East with a reduction of 73.5% of revenues for 2020 compared to the projected baseline

While the situation is expected to slightly improve for Q4 com-pared to the two previous quarters, the fourth quarter of 2020 is nevertheless projected to end up much weaker than previous assessments were forecasting.

Optimistic: Multiple effective vaccines available in 2021 reducing the risk of supply shortage in addition to a strong enthusiasm from passengers to restart to fly and aggressive airlines fleet recovery.

Baseline: Effective vaccine(s) largely distributed in the second half of 2020 in addition to an enthusiastic response from passengers to start flying again and a reason-able airlines fleet recovery.

Under those assumptions, ACI World forecast the following related to the recovery of airport passenger traffic (with additional detail in Charts on page 4):

At the country-market level, markets having significant domestic traffic are expected however to recover in 2023 to pre-COVID-19 levels while markets with a significant share of international traffic are unlikely to return to 2019 levels until 2024.

More than 65 experts in the aviation industry were polled regarding their thoughts on the upcoming air transport recovery and their answers were used for the construction of a Delphi-method forecast, which aligns with the above results.

“The pandemic has resulted in a full-scale transportation crisis with the aviation brought to a virtual halt in April following lockdowns imposed in many countries in the second half of March,” ACI World Director General Luis Felipe de Oliveira said.

“A consistent approach to testing should be implemented now to promote travel and do away with restrictive quarantine measures with a coordinated and risk-based approach to combining testing and vaccination introduced going forward.

“Tests and vaccines together will play a key role on the industry recovery, providing passengers with a safe travel environment and foster confidence in air travel,” said de Oliveira.