Airports Council International (ACI) World reports that global passenger traffic moderated in the first half of 2019 while the air freight industry continued to experience downturn.

The global passenger market grew by +3.9%, year-over-year, up from +3.1% in May. Year-to-date growth reached +3.6%, almost one percentage point below its 12-month rolling average. Total freight volumes declined -3.2% for the first half of the year, and fell by -5.1% in June.

“The global passenger market managed to sustain its growth rate in June compared to the previous month,” ACI World Director General Angela Gittens said. “While year-to-date results show a slight slowdown, the industry continues to show resilience in the face of the weakened global economy.

“The trade tensions that persist between several major economies – and the accompanying GDP growth slowdown – have had more impact on the air freight industry, which could possibly end 2019 in the negative.”

The mid-year growth for inter-national passenger traffic was +4.9% year-to-date, close to twice the gains posted by the domestic market during the same period (+2.5%). Domestic traffic gained +2.3% in June, slightly below its +2.4% gain in May.

Of the major regional markets, Europe had the highest growth rate in June, with +4.7% on a year-over-year basis. The region’s growth rate stood at +4.3% for the first half of the year. The international segment drove most of its total passenger growth, at +5.4% year-to-date, versus +1.4% for the domestic market.

After performing similarly to Europe until the month of May, North America stood at +3.9% by the end of the second quarter. The region’s total passenger traffic grew +2.9% on a year-over-year basis in June. Unlike Asia-Pacific and Europe, North America’s domestic market remained relatively strong during the first half of the year, gaining +3.7% year-to-date, versus +4.8% for the international segment.

Latin America-Caribbean performed well in June, growing +6% for the month. The region’s mid-year results were the second highest after Africa, at +5.5%. The domestic segment was a major driver of the region’s performance, standing at +6.3% year-to-date.

Asia-Pacific remained the lowest performer of the major regional markets in June, gaining +2.1%. The region ended the first half of the year with +1.9% growth on a year-to-date basis. With rising tensions between Japan and South Korea, and the continuing trade spat between China and the United States, 2019 may result in loss for Asia-Pacific’s major economies. After being the driver of growth for the global air transport industry for the past several years, the current trend represents a major shift in the near-term.

Africa continued to grow significantly in June, gaining +12.3% on a year-over year basis. Year-to-date results for the region stood at +7.1%, the highest of all regions. Its international passenger market grew +8.3% for the first half of the year, driving most of the total increase.

The Middle East posted the second-highest growth in June, after Africa, with +8.1% gain on a year-over-year basis. The last 12 months have been challenging for the Middle East, resulting in a +2.5% growth for the first half of the year. Political tension in the region remained high, with limited indication that the high June figures marked a shift in local dynamics. 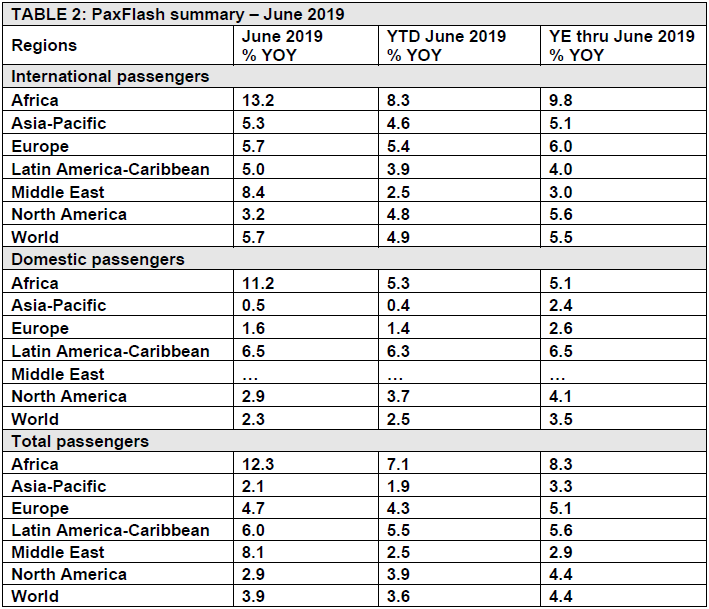