Some words of remembrance from Carol Davy

Carol Davy was one of the privileged few who had the opportunity to work directly with the iconic Fred Hayman when he was a leader not only on Rodeo Drive, but also a leader creating cutting edge fragrance launches in the 1980s. Hayman died on April 14, 2016, in Malibu, California, at the age of 90.

“In putting together these memories I really realized how fortunate I was to meet Fred at the Fragrance Foundation Awards in NYC while I was with the May Company in the early 80’s. He offered me the opportunity to create my own Visual Merchandising Department within his company and, literally, changed my life,” Davy tells TMI. 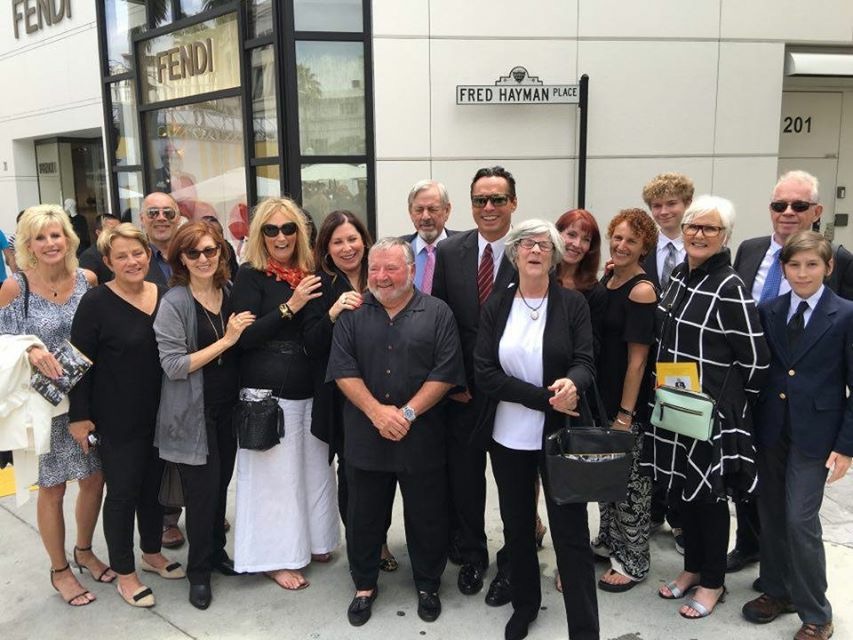 Carol Davy (in white skirt), with Robert Hayman, (in the red tie) and the rest of the former Giorgio Beverly Hills team at the tribute for Fred Hayman on May 15.

On Sunday, May 15, a group of loving family and friends and those of us who were fortunate enough to have worked with and for him throughout the years, paid their respects to the man best known as the “Godfather of Rodeo Drive.” This of course was Fred Hayman, who’s Giorgio Boutique transformed a sleepy retail area in Beverly Hills, California into a world renowned pantheon of global shopping streets.

Lovingly organized by Katy Sweet, a longtime personal friend and spokesperson for Mr. Hayman, over 500 guests assembled to celebrate his vision of glamour and luxury for Beverly Hills as well as the impeccable style and grace of this very special man and the generosity in which he lived his life.

The event itself was a wonderful combination of all that was Fred Hayman – a welcome from his close friend, George Schlatter –a well-known TV producer (Rowan & Martin), followed by warm words from Donna Elman Garber, the current Mayor of Beverly Hills, an emotional rendering of “My Heart Will Go On” sung by Tenor Rafael Moras from the LA Opera and genuine heartfelt comments by David Horner, the former EVP of Giorgio Beverly Hills Perfume.

The speeches in closed with loving tributes to their father from both Nicole and Robert Hayman.

There was not a dry eye in the group when Robert invited everyone in attendance to enjoy the prestigious champagne and Beluga caviar as well as Wolfgang Puck’s amazing catering. For all of us who had known and worked for Fred Hayman and had the benefit of his genius and passion for only the best, it had indeed come full circle. 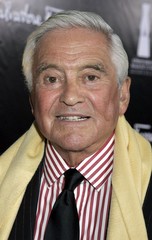 A food and beverage man brought to Los Angeles by Conrad Hilton to open the Beverly Hilton, Fred Hayman made the hotel into a first class hotel, even bringing the Golden Globes award ceremony there.

Fred then purchased the Giorgio boutique, situated on a very sleepy street with locally-owned modest shops, a gas station and the Brown Derby restaurant on the corner of Wilshire and Rodeo Drive — and magic began to happen. He installed a plush oak bar, a pool table and a reading area with a newspaper rack to entertain the men accompanying their wives or their girlfriends when they shopped. He added a Door Man, wrote personal thank you notes in his signature red script and delivered both customers and their purchases in his stately 1952 Rolls Royce. Soon the Boutique was drawing more Hollywood stars than at an opening night.

The store became a magnet for Hollywood’s elite – from Barbra Streisand to Jacqueline Bisset, and at Oscar time, at least ten percent of all of the gowns worn at the ceremony had a Giorgio label. Fred Hayman was all about service and taking care of customers – his store was an extension of his home and your comfort was important for him. The drinks were on the house.

And then came the heady fragrance – Giorgio Beverly Hills — with the signature yellow and white stripes replicating the awnings of the boutique. Developed with only the purest and most expensive of fragrance oils and presented in true show biz fashion, Fred launched an entirely new way of marketing. To hear David Horner speak of the robust relationship he and his partner Jim Roth – both senior corporate executives – combined with the entrepreneurial vigor and steel will and passion of Fred Hayman – there was no way their fragrance was not going to succeed! It was launched with the party of all parties in a parking lot across the street from the store (now Via Rodeo) where mariachi bands played, famous movie stars from both New and Old Hollywood mixed in with local political figures and where Fred Hayman’s close personal friend, Patrick Terral, the owner of Ma Maison, catered his new California cuisine with his now famous Austrian chef Wolfgang Puck. History was made that night. 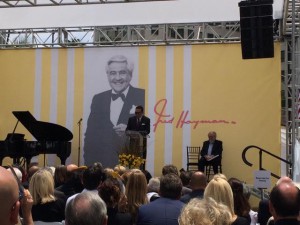 Faced with minimal budgets for the launch and with a large investment directed toward the product itself, not to mention the over-the-top launch party itself which was a “must have” in Fred’s mind, Fred with his partners David Horner and Jim Roth developed a direct mail strategy with a revolutionary new sampling device – the perfume encapsulated in a scented piece with Fred Hayman’s red signature inviting them to try his fragrance.

This is now a standard advertising tool for fragrances worldwide. Moe Iozari, retired Executive Vice President of 3M, described the birth of this process and the impeccable attention to detail which Fred Hayman brought to the project, for no detail – no matter how small -escaped Fred’s attention.

It worked brilliantly and soon Giorgio Beverly Hills was the most sought after fragrance in the US. Giorgio Beverly Hills broke all the rules of retailing, keeping distribution highly selective and exclusive, keeping major retailers literally begging for the fragrance…I traveled with Fred and his VP of Sales Mary Beth Peterson (currently the President of REN North America) where retailers where challenged by Fred to change the color of their beauty department carpeting to meet Fred’s critical eye. And they did.

Fred would become the unofficial grandmaster of more than a dozen Academy Awards shows and the founder of the Rodeo Drive Committee, which encouraged designers such as Chanel, Giorgio Armani and Gucci to open boutiques on Rodeo Drive, and the rest is history. He truly understood the possibilities of branding in the retail universe. Giorgio quickly became a global brand with prestigious launches at the American Embassy in Paris and in the UK and then worldwide and travel retail.

Fred Hayman was an American revolutionary. Under the yellow-and-white colors of his Giorgio Beverly Hills store and his namesake follow-up, he really did radically change the way the world considers Los Angeles style and how the beauty business operates. Under his tutelage, we created Giorgio weeks, wrapping stores in yellow and white from exterior windows, to cosmetic ledges and onto the fashion floor. More was definitely more. And the sales followed.

The fragrance business was sold to Avon Products in 1998 for over $100 million dollars, with the monies quietly donated throughout the years to charities by Fred and his beloved wife Betty.

Loving. Kind. Fun. Family. Caring. Warm. Thoughtful. Generous. Gracious. These the words that best describe this marvelous man I was blessed to work with.

While the speakers were sharing their thoughts from the podium on Sunday, a monarch butterfly appeared and fluttered throughout the presentations and when Robert Hayman completed his tribute, the butterfly flew off. We all did our best to capture this butterfly with our iphones and even the professionals took shot after shot…but none of us could capture it. The butterfly at the send-off for Fred Hayman, the celebration of his gifts to us and the love and laughter felt and heard from old colleagues and family and friends reminded us all that Fred Hayman remains still with us.