Ferrari, Movado Group, Luxottica and Aer Rianta brought together the Ferrari branded watches and sunglasses for the first time in this high profile activation at Montreal Pierre Elliott Trudeau International Airport tied to the Grand Prix of Canada this summer.

Aer Rianta International- North America made traveling through Montreal and Quebec airports much more entertaining this past year. ARI-NA staged some engaging and fun-filled activations at the point of sale to help passengers pass the time before boarding their planes, while enticing them to make a purchase in the duty free store.

The operator of The Loop Duty Free, ARI-NA has designed its stores in Canada to combine luxury appeal and customer interaction, while it delivers exceptional customer service. Jackie McDonagh, General Manager for ARI North America, speaks about some of the most memorable stagings with TMI.

“This year, with the help of our brand and airport partners, Aer Rianta has developed some of the most captivating traffic stopping activations. One example is our Grand Prix of Canada celebration in Montreal that featured a partnership between Ferrari, Movado Group, Luxottica and Aer Rianta that brought together the Ferrari branded watches and sunglasses for the first time ever in the world. This activation had at its center a Ferrari F1 racing simulator,” she said.

Passengers were invited to live the thrills and excitement of race-day through the Ferrari simulator in the heart of the airport. The activation, which ran from early June through mid-July, was executed in the airport’s largest promotional space, in the main walkway for international passengers. Passengers could “test-drive” a high-octane Scuderia Ferrari driving simulator, and purchases were rewarded with a Scuderia Ferrari cap and a premium fast-track to ride the simulator, jumping the queue of those waiting to “drive.” 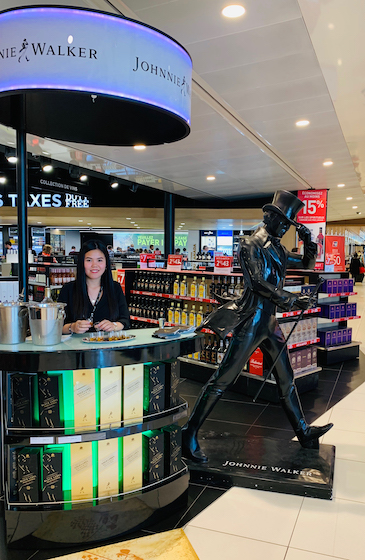 “The simulator was one of many interactive elements that we added to our promotional spaces this year,” says McDonagh.

In other special events, ARI-NA had Johnnie Walker himself, or at least his life-sized replica, standing at the entrance of the newly renovated liquor department, ready to strike a pose with the many selfie-takers passing by.

In another high profile activation for Dior Sauvage, passengers could have their initials custom stamped into a leather Dior luggage tag.

ARI-NA even handed out custom-made popsicles infused with the same botanicals that are contained in the new Ketel One Botanical vodkas, and sample a taste of the vodka itself within a lush setting of greenery and fruit.

ARI-NA also featured a number of activations that were unique to Montreal Airport, says McDonagh.

“The Armani Montreal Cinema concept had the city name in bright lights, custom-created to Montreal. And for the spring break period, we partnered with local distillery, Ungava Group, that produces 5 different spirits locally, bringing a professional mixologist into the shop for a month to treat travelers to his original creations. For this event, the Ungava people even drove their Mini Cooper into the store!”

McDonagh says that Canada is enjoying record-breaking air traffic, and this increase in Montreal along with ARI-NA’s traffic stopping initiatives, have helped The Loop see an increase in average spend above last year. 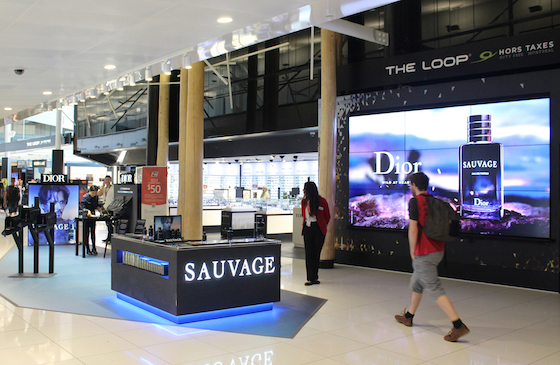 The influx of Asian passengers was another positive development that has continued this year, she says.

“With two daily direct routes to China, Beijing and Shanghai, along with the direct flight to Tokyo, the Asian routes have had a large impact on our business. These routes are our fastest growing and have some of the highest average transactions in the business – they have made our skincare category one of the most successful in the whole store. We have added many new brands and products to appeal to this customer over the last year, such as Shiseido,” she notes.

But Montreal’s passenger mix goes beyond the Asia passenger, she says.

“Our top destination is still Paris, from which we have seen very good growth in sales over last year. Mexico City as well as Cuba have also been very strong for us lately.”