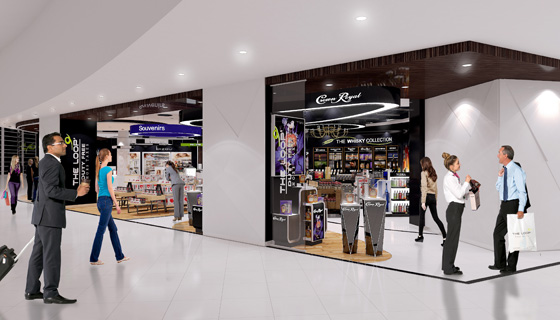 ARINA has operated the duty free stores in Montreal for the past two decades.

The contract covers all core categories as well as souvenirs, watches, gifts, food and toys, and will run for 7 years and 5 months beginning in December 2017.

ARINA will serve both International and Transborder passengers from its 400 sqm store, branded “The Loop Hors Taxes.”

The contemporary store design features predominantly black and white colors with touches of dark and light woods to define categories.

A Sense of Place is evoked in the native Quebecois products section where the beauty of a Canadian winter is reflected by a white corrugated back illuminated surround frame, highlighting brand personalized wall units for local Ice Wines and Ciders.

Commenting on the win ARI CEO Jack MacGowan said, “ARI has had a long and very successful association with Canada and in particular Québec since 1998. It’s a region we know really well and we have built up an exceptional under-standing of the passenger demographic over the past 20 years of operations there.

“Capturing this key contract, on the back of our success in winning Canadian Duty Free Retailer of the Year in 2016, reinforces our commitment to the Canadian duty free market. I look forward to working with our new partners in Québec International Airport to deliver a tailor-made consumer-led proposition that will not only enhance the overall passenger experience, but also drive sustained commercial success.”

Speaking with TMI, Jackie McDonagh, ARI General Manager North America, adds: “We look forward to working with our new partners at Quebec International Airport and are excited to deliver a consumer-led offer.”

President and CEO of Aéroport de Québec Inc. Gaëtan Gagné said, “A new retail environment is an important component in the YQB 2018 project. Our passengers are excited about discovering their new airport building and we can feel a growing sense of enthusiasm in the community.

“The concessions announced today match the requirements of a world-class airport and offer passengers a retail experience that reflects the most recent airport trends, providing a wide range of products and services with a local,

Paradies Lagardère Travel Retail (Relay), already present at YQB, will occupy a larger space with a completely new layout. Once the work on Phase 2 is completed, there will be a groundside Relay counter in addition to the airside store.

Both outlets will offer passengers a range of magazines, books, drinks, snacks and travel items.

“Paradies Lagardère is thrilled to have been selected to extend our relationship with Québec City Jean Lesage International Airport and add a second Relay store,” said Gregg Paradies, President and CEO of Paradies Lagardère.

Overview of work phases in the YQB 2018 project

The first phase of work in the YQB 2018 project, scheduled for completion in the fall of 2017, involves the construction of a new building northeast of the existing terminal. It will welcome its first passengers in December 2017, and this announcement covers only the businesses that will operate in this specific sector.

Phase 2 of the project involves changes to the layout of the existing terminal, and this is the sector where the future food court and family zone, among other attractions, will be located. The names of the businesses concerned will be announced in due course.

The YQB 2018 project is the biggest extension and improvement project ever launched in the history of Aéroport de Québec Inc. An investment of $277 million will be made to extend the site and support the growth of the Québec City airport.