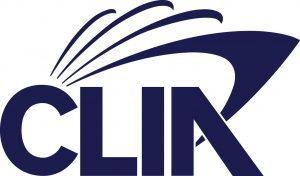 Even as the Americas continue to dominate the cruise industry, Asia’s cruise passenger source market hit a new high in 2018 with 4.24 million people taking an ocean cruise, up 4.6% year-on-year, reports data released his month by Cruise Lines International Association (CLIA).

Asia, the third largest cruise market after North America and Europe, accounted for a 14.8% share of the total global ocean passenger volume (28.5 million) for 2018.

Most of the source markets in Asia saw year-on-year gains in 2018 except Mainland China and Malaysia. In particular, passenger volume from Singapore, India, Indonesia, Philippines, South Korea, Thailand and Vietnam had double-digit growth.

Mainland China retained its dominance as a source market, accounting for 55.8% of all Asian passengers, though the Chinese market has been going through a period of adjustment and saw a marginal 1.6% decline in passengers.

The more measured increase in Asia’s passenger volume did not come as a surprise as cruise ship capacity dipped in 2018 after years of rapid expansion in this region.

Asia’s slowdown in ship capacity is due to the strong demand for cruise ships worldwide, and reduced short cruise itinerary options ex-mainland China.

“In the next few years, cruising in Asia is expected to continue growing in popularity with the arrival of new ships in 2019/2020 including from Costa Cruises, Genting Cruise Lines, Royal Caribbean International and MSC Cruises,” said CLIA Managing Director for Australasia & Asia Joel Katz. 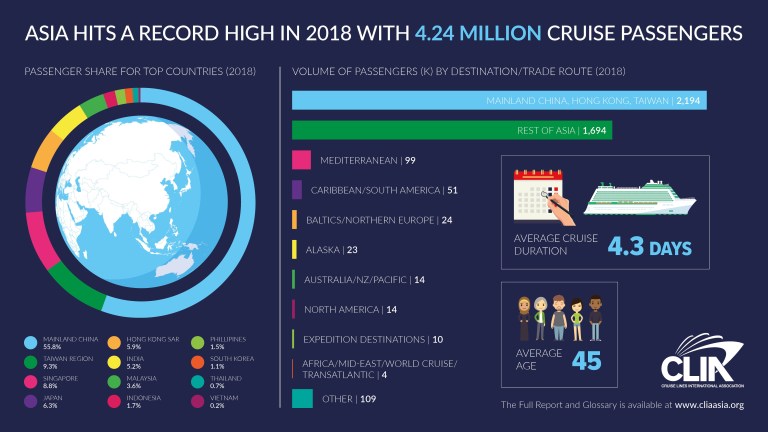 While China continues to dominate the passenger share of Asia, cruise passengers numbers from Taiwan and Singapore have been steadily growing.

“With nine in ten Asian cruise travelers choosing to cruise in Asia, it is clear that cruising will keep growing in popularity as more capacity will be deployed to Asia in the next few years,” said Katz.

“Asian cruise passengers are found across the age spectrum, suggesting different consumer segments interested in a cruise holiday and providing numerous possibilities for industry partners to develop the cruise penetration rate in this region.” 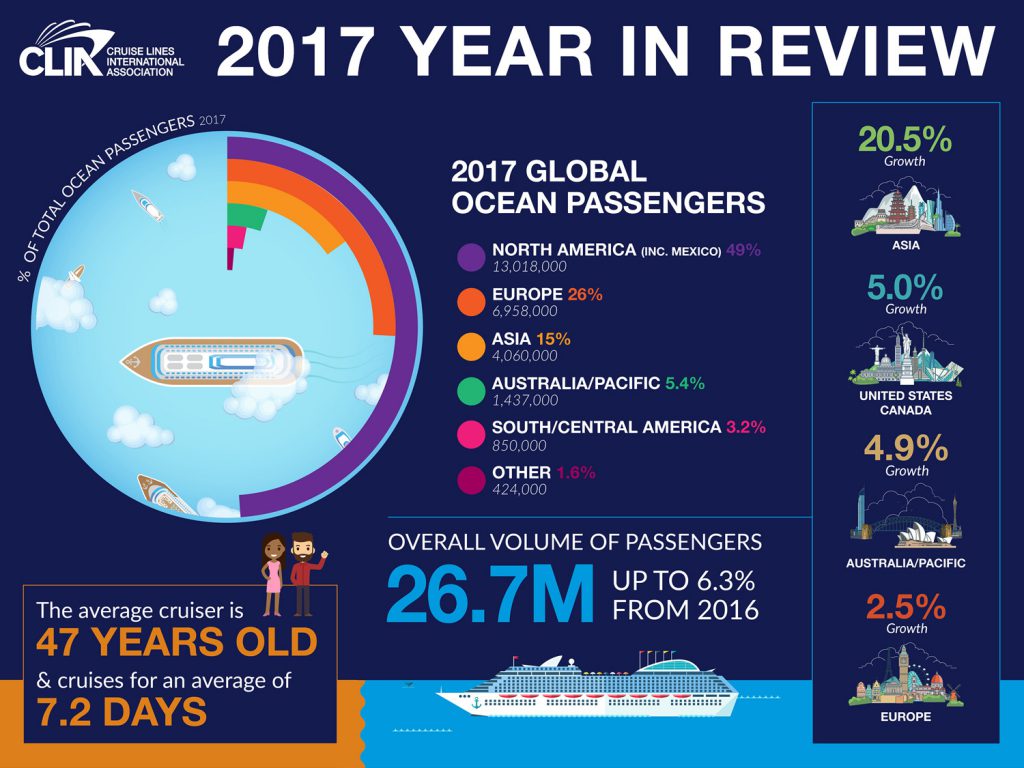 Asian cruise passengers are found across the age spectrum with an average age of 45.4 years, lower than the global average of 47 years. Only three markets show real divergence: India, a young 37-year average; Indonesia a 39-year aver-age and Japan an older 57 years.

Outside of Asia, the Mediterranean, Caribbean/South America, Baltics/ Northern Europe, and Alaska were popular choices, in that order.

Shorter sailings are the dominant choice of Asians, 89% of whom sail 4-6 nights with an average of 4.9 days.