South American Duty Free Association ASUTIL reiterated four measures it is focusing on in its joint petition with Airports Council International Latin America (ACI LAC), which calls on regional governments for aid as a result of the coronavirus crisis.

The Association held an online briefing earlier this week attended by media, the ASUTIL Board and suppliers, to outline actions it is taking to help the travel retail industry survive until any recovery begins. 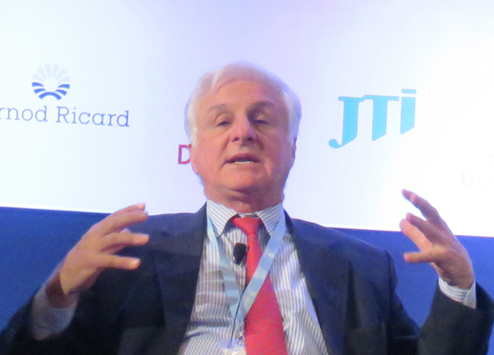 Dr. Roberto Canessa speaking at the ASUTIL Conference in 2016.

A highlight of the briefing was a guest appearance by cardiologist Dr. Roberto Canessa, one of the survivors of the Uruguayan plane crash in the Andes Mountains in 1972, which became a best-selling book and film. Canessa, who has spoken at two previous ASUTIL conferences, stressed the need for a positive attitude during this crisis and shared his experiences sourcing ventilators for his country in the face of the COVID-19 pandemic.

In regards to business, ASUTIL Secretary-General José Luis Donagaray said that in Latin America only airports in Brazil, Mexico and Chile were open, but traffic is down by -90% in these locations.

Recovery might not be until the first or second quarter of 2021, said ASUTIL President Gustavo Fagundes, citing a study from MacKenzie.

Fagundes stressed that the industry needs to take a broader view than just travel retail. “This is a wider industry issue…” he said, adding that they need to make governments understand that travel is suffering more than other sectors and will take longer to recover.

The issues ASUTIL are stressing include concession fees that the Association says should not be charged when air traffic is so impacted and airports are nearly closed; and protecting employees, including providing government labor packages and flexibility: “We need to save as many jobs as possible,” stressed Fagundes.

The final two measures address liquidity, such as deferral of federal taxes and financial assistance for operators and suppliers. ACI-LAC and ASUTIL are petitioning governments on a country by country basis with these issues.

ASUTIL is also exploring with Customs authorities a number of ways in which e-commerce (such as pre-ordering and home delivery for people planning to fly) might be arranged.

“Customs can control to whom we sell and confirm who is traveling. We still will be able to follow all quotas and restrictions,” said Fagundes, who believes that the online channel is critical to help the industry to recover.

Donagaray confirmed that ASUTIL is still planning to hold the border store conference, tentatively scheduled for November 5-6. The conference will most likely take place in Puerto Iguazu, Argentina, he said.