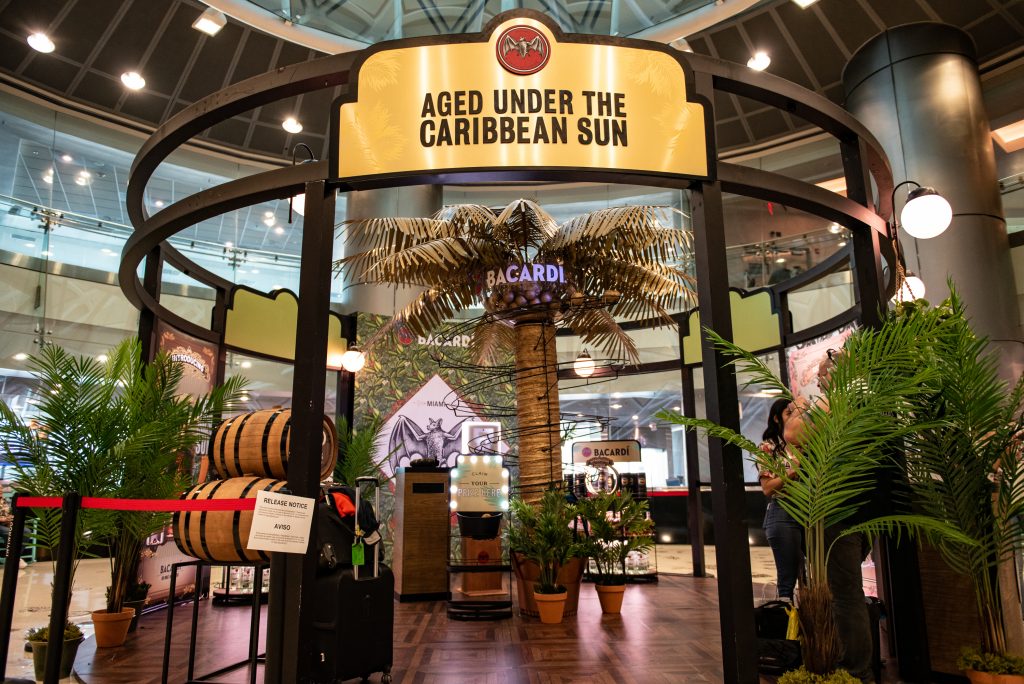 Bacardi’s “Aged under the Caribbean sun” campaign at Miami International Airport held in association with Duty Free Americas through Jan. 3, 2020.

In a travel retail first, international and domestic travelers can purchase Bacardi Superior, Bacardi Cuatro, Bacardi Ocho and Bacardi Diez from the space in Terminal D through January 3, 2020.

Domestic purchases are made via ReserveBar.com, and delivery of the product is available within the U.S. This is the first time that alcohol retail purchases have been made available to domestic travelers at MIA. The benefit to domestic passengers is that they can have bottles custom engraved with free shipping home in the U.S. As always, duty free pricing is only available to people traveling internationally.

The campaign’s core message ‘Aged under the Caribbean sun’ is brought to life with an impactful, multi-sensory campaign located in the center of the terminal, featuring a range of Bacardi’s aged rums: Bacardi Cuatro (4YO), Bacardi Ocho (8YO), Bacardi Diez (10YO) and travel retail exclusive Bacardi Gran Reserva Especial (16YO).

A central feature of the space is a giant interactive palm tree representing ‘El Coco’, the iconic coconut tree planted by Facundo Bacardí Moreau on the day in 1862 that his father, Don Facundo Bacardí Massó, opened the first Bacardi distillery in Santiago de Cuba.

Pulling a lever located at ‘El Coco’ releases a golden coconut to represent one of the Bacardi variants.

A brand ambassador is available to expand on the story behind each rum, its ageing process and taste profile, before offering a drink at the tasting bar.

As part of a series of engaging touchpoints, travelers can learn about the Angels’ Share, the term given to describe liquid lost from barrels to evaporation when ageing.

The airport campaign is a travel interpretation of the global Bacardi platform, ‘Do What Moves You’ which encourages freedom of choice and expression.

“Creating stand-out memories for travelers is at the heart of this Bacardi campaign. We want to encourage people to relax and have fun as they get to understand the ageing process in Bacardi rums and to enjoy exploring the versatility of our portfolio,” says Geoff Biggs, Regional Director Americas, Bacardi Global Travel Retail.

“With rums for every drinking occasion, from holiday cocktails to a considered sipping experience, we want to increase people’s appreciation of Bacardi premium rums as they find the one that’s the right expression of who they are,” he adds.

Jon Bonchick, Director of Buying and Merchandising- Duty Free Americas adds. “Rum is an important category for us at Miami International but shoppers are not always confident to try something new.

“With a high level of consumer trust and recognition, Bacardi is the perfect brand to inspire greater confidence especially with the educational creativity and fun in this campaign.  It’s great to see people enjoying themselves within a well-planned strategy that brings excitement and footfall to the whole category.”