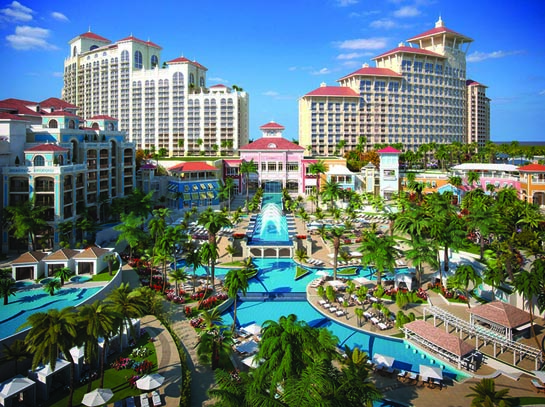 In an undertaking that has taken five years of planning and massive construction, Baha Mar, the largest single-phase luxury resort project in the history of the Caribbean, and the largest tourism project under construction in the Western Hemisphere, will begin accepting guests on March 27, 2015.
The $3.5 billion Baha Mar resort in Nassau is designed to attract more upscale visitors to The Bahamas, down to billing itself as “the New Riviera.”

At the Chinese-financed Baha Mar — which was largely built using thousands of construction workers shipped in from China— three of four planned luxury hotels will open in late March, with the fourth property – the Grand Hyatt at Baha Mar – scheduled to open in May.

Located on 1,000-acres along Nassau’s Cable Beach, Baha Mar promises to introduce a “new era of luxury, glamour, gaming and excitement to the Caribbean.” When all the properties are completed, it will feature 2,200 luxury guest rooms across four hotels – Baha Mar Casino & Hotel, Rosewood at Baha Mar, Grand Hyatt at Baha Mar and SLS LUX at Baha Mar – along with the Caribbean’s largest casino.
The idea is to turn the Bahamas into a world-class gaming destination rivaling Las Vegas, Macau or Singapore. This was made possible through the passage of a new law in November that allow Internet, interactive and mobile gaming, as well as in-play sports and proxy betting to lure Chinese and other high-rollers to Baha Mar’s immense 100,000-square-foot casino.

In addition to the four hotels and the casino, the resort features a TPC at Baha Mar Jack Nicklaus-designed golf course, ESPA spa, pools, beach experiences, and many restaurants and luxury shops.
Among the boutiques are locals like John Bull and The Perfume Shop, along with Tiffany and Rolex, Montblanc, Jaeger-Lecoultre, M.A.C, IWC, Quantum Watches, Breitling, Bulgari, Cartier, Coach, Michael Kors, Morely for Men and others.

There is no denying that the massive project is a boon to The Bahamas and the region. According to the fact sheets issued by the developers, Baha Mar will add some $1 billion to the economy in new spending in just the first year after completion, not to mention the infusion of cash it brought during the building stage over the past five years (even though the use of 4,100 Chinese laborers to build it was a major source of friction in this country where the unemployment rate exceeds 15%.)
Baha Mar is also expected to directly impact tourism numbers. It will bring a projected 430,000 stopover visitors to Nassau by the third year of operations – a 30% increase, says the company.