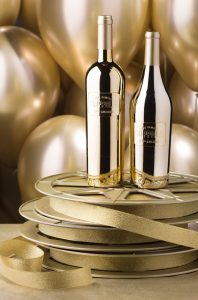 The Northern California winery has created a Chardonnay and a Cabernet Sauvignon, both from 2019, made from grapes grown in Sonoma County. This is the first year since 2011 that California did not suffer from drought, giving the wine a pleasing complexity, thanks to the high quality of grapes from that year, said the company in a statement.

“The Family Coppola 93rd Awards” limited-edition bottles themselves have been produced by Bottega S.p.A and feature a mirror gold color exterior. Each bottle was crafted as a symbol honoring the significant talent, passion and hard work achieved throughout the entire film industry, said the companies.

Bottega S.p.A. winery in Bibano di Godega has for years been developing an exclusive metallization process, in which the mirrored gold color becomes “glass.” This is a patented process recently recognized also by the Court of Appeal of Venice.