Cell Shop Duty Free in Foz de Iguaçu, Brazil is one of the flagship free shops on the Brazilian border, says Essence Corp. VP Antoine Bona, and are more reminiscent of a good airport store than old-style border stores.

Miami-based Essence Corp. has taken full advantage of the opening of border stores on the Brazilian side of the border to help bolster its sales of perfumes and cosmetics during the course of the pandemic. Essence Corp. Vice President of Sales Antoine Bona tells TMI that the border openings permitted his distribution company to add about one new point of sale every month or so over the past year, even as other venues remained closed due to COVID-19.

“As you know, legislation was passed [in 2018] to allow for Brazilian duty free stores in 32 twin cities on the Brazilian side. Looking at nearby cities, these stores could serve a population of around 15 million when all the cities open,” explains Bona.

With a duty free limit of $300* per person per month for Brazilian residents, (every 30 days), that can add up to a very substantial market, says Bona.

“The duty free stores are not only for the traveling Brazilians, but for the local population as well. So if a town has 200,000 inhabitants, and they are allowed to buy $300 worth of goods every month, (liquor, perfumes, confectionery, etc.) that is a lot of potential sales,” he said.

There are currently 18 duty free points of sale that are open on the Brazilian side of the border, of which only four do not carry perfumes & cosmetics, says Bona. In addition, besides travel retail giants Dufry and DFA, which are today operating two points of sale in Uruguaiana, all the others are new, independent Brazilian owned local operators. As many as nine more shops are expected to open before the end of the year as well.

“Some of these retailers have more than one store, so the business is concentrated in the hands of about nine operators,” explains Bona.

And since Essence Corp. is a Master Distributor for travel retail for some major groups carrying many popular brands, the new stores have been very welcoming. Essence Corp. represents in this region Interparfums, whose main brands include Montblanc, Coach, Jimmy Choo, Lagerfeld, Montblanc, Kate Spade; Interparfums New York, with brands including Ferragamo, Oscar de la Renta, Abercrombie & Fitch and Anna Sui; and EuroItalia, with Versace and Moschino, as well as Victoria’s Secret, Bath & Body Works) and Rituals.

Additionally, some of the other groups that Essence Corp. distributes for the Caribbean have asked the company to handle the Brazil border as well: Puig – with major brands including Carolina Herrera, Paco Rabanne and Jean Paul Gaultier; as well as Shiseido and Hermès.

“They have trusted us because we have a very strong relationship and partnership,” said Bona. “We were also one of the first to the market. The first store opened in 2019 and we have been active on the borders since that time. We have a supervisor who is located in Brazil, and she takes care of this market and has been doing constant market visits, even during COVID. Domestic travel in Brazil really never stopped during the pandemic,” he explains. 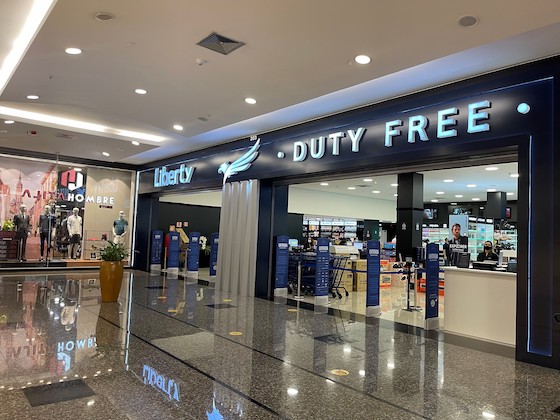 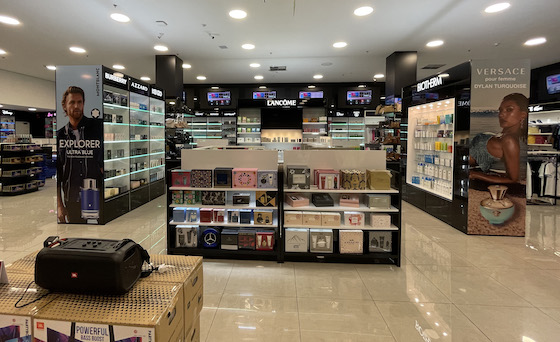 Like many of the new border shops, Liberty Duty Free, also in Foz de Iguaçu, Brazil, is located in popular malls surrounded by many other shops that appeal to local shoppers. The new stores have eagerly welcomed the Essence Corp. brands.

Another plus – Essence Corp. is sharing its expertise with the new operators to help develop the beauty category in the new border stores.

“The Brazil border has been a real highlight and we are meeting with and developing the relationships with the new operators. We are helping to educate them along the way when it comes to category management, merchandising, brand adjacencies, turning sales, and how to manage luxury,” said Bona. “Plus, we have been able to scale the distribution by adding more brands to our portfolio – specifically the Puig brands,” he added. 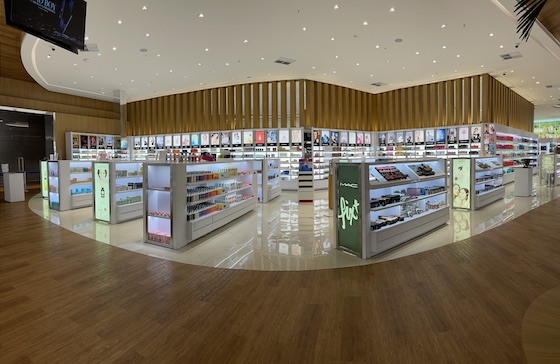 Bona reports that many of these new stores are really beautifully done.

“Cell Shop Duty Free in Foz de Iguaçu is one standout and Bah Free Shop in Uruguaiana is another. These are probably the two flagships now on the border. They are more typical of an airport store than the old-fashioned border stores,” says Bona.

While the free shops on the Argentinean side of the border have yet to open (London Supply is scheduled to first open its flagship Iguazu store at the end of October/early November) Bona notes that the complexity of travel today has made the Brazilian stores more important. 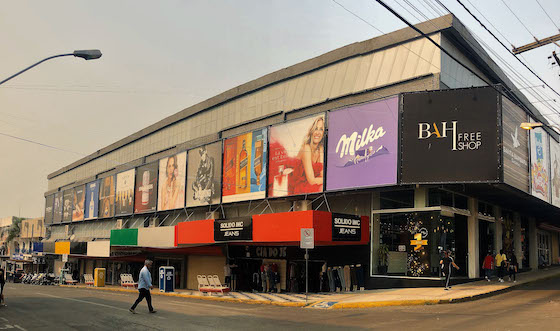 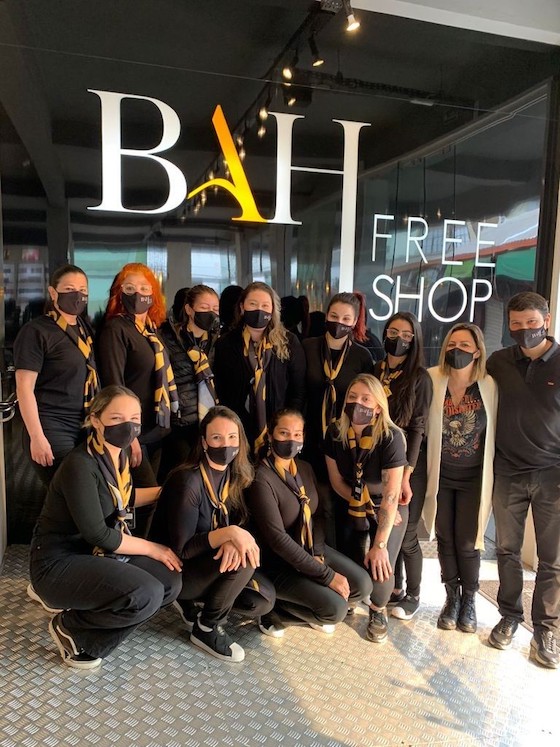 On top of their accessibility – and the fact that many of the new stores are conveniently located in well-visited shopping malls that also house many other shops—Essence Corp. is using the full range of retail animations to stimulate sales on the Brazilian border. 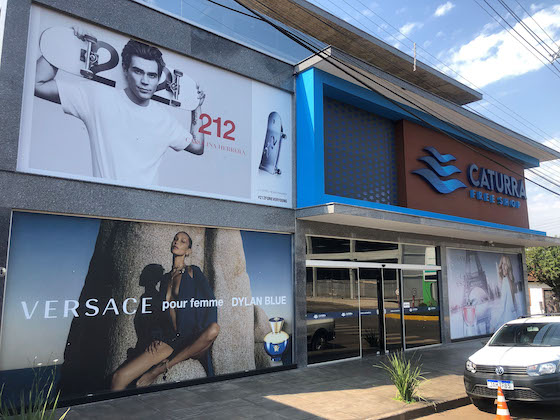 From GWPs to giant billboards for Montblanc, Versace, Carolina Herrera and Paco Rabanne to special Christmas gift set animations and bespoke gondolas for Rituals, Essence Corp. and its brands have been investing in the market.

Bona says that Essence expects to be in all of the shops that carry P&C before the end of the year. The company is negotiating with the last three of the current operators now.

“It is important to note that this is not a saturated market and it has great potential,” he notes. “As of today, stores have only opened in seven of the 32 twin cities where duty free border shops have been approved.

“And now that stores have opened, and the brands see the quality of the stores, and the quality of the job that we were doing, they realize the benefits of working with a company like ours who can consolidate all these smaller stores for them—much like we did in the Caribbean. 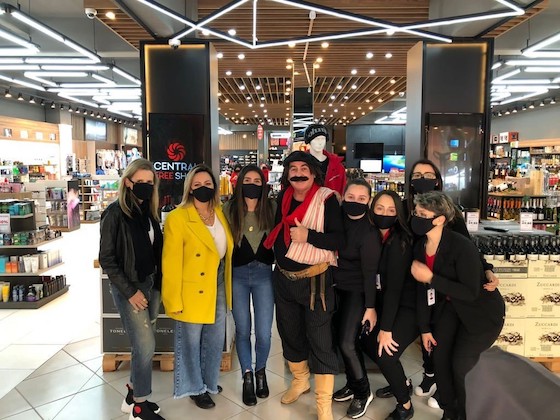 Another Essence Corp. training at Central Free Shop in Uruguaiana.

“Where there are many smaller family-owned players, it is also in the retailers’ interest to work with someone like us who has the relationship with the brands. They see the benefits of consolidation when it comes to lowering the cost of logistics or replacing purchase orders.”

With as many as 30 new free shops on the schedule by the beginning of 2022, the Brazilian border duty free shops could be an important impetus for recovery in the region in the coming months.

*Although it was announced at the ASUTIL Conference in November 2020 that the Receita Federal (Brazilian Customs Authority) had authorized an increase in the duty free allowance from US$300 to US$500, which was expected to take effect from January 1, 2021, no change has yet taken place. Although there have been no official announcements, TMI understands that the higher allowance was postponed due to tax revenues already being lower than expected because of the coronavirus. The $500 limit is in the system and is still expected to take effect sometime in the future.