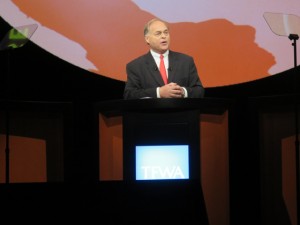 Despite slowing growth across the travel retail industry, the mood at the 2015 TFWA World Exhibition was generally positive and optimistic.

“Events this year, both within and beyond our industry, have confirmed that we are experiencing a period of intense, and lasting, change,” he said. “If the tectonic plates of the global economy have shifted, then so too have those of the global duty free & travel retail industry.”

However, global duty free and travel retail sales in Q2 2015 improved significantly compared to the first quarter. By the end of March 2015 global sales were down by 3.3% compared to the same period in 2014, and by the end of June sales had dropped only -0.2%.

“Over the first half, therefore, we have seen basically zero growth,” Juul-Mortensen said. “This performance should also be seen in the context of extreme currency volatility in many markets, which continues to pose considerable challenges to the industry.”

The Americas region recorded slight growth of +1.9% in first half of 2015, while Asia Pacific was the best-performing region with sales up +6.5%.

Juul-Mortensen pointed to the increasing power of Dufry since purchasing Nuance and World Duty Free Group as well as Coty’s acquisition of P&G’s beauty business as factors that will greatly impact the travel retail business going forward.

The travel retail industry also needs to account for and integrate the increased use of online and mobile technology, which Juul-Mortensen thinks will help re-accelerate travel retail growth rates.
“Incredible developments are taking place in the online world and our industry is increasingly exposed to their impact,” he said. 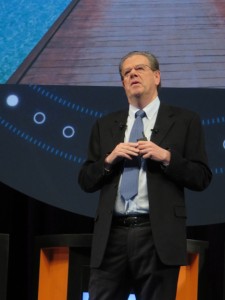 Long turned TUI Group into a global brand, consolidating two parts of TUI together “which has given us long-term sustainability in what will continue to be a challenging market environment,” he said.
“The history of the TUI Group has been one of acquisition, normally of the leading leisure travel brands in source markets. This has led to a number of very well-known local brands operating under the TUI smile umbrella,” said Long.

Today TUI Group operates several airlines, hundreds of hotels, travel agencies, and retail stores, plus a dozen cruise ships. Long focused on being customer-centric, being innovative, and never losing sight of how important reputation is.

Rudy Giuliani
Former New York City Mayor Rudy Giuliani, known for leading the city through the 9/11 terrorist attacks, gave his keynote address on leadership in the face of crisis and change.

In the first part of his speech, Giuliani focused on six key principles of leadership, which he tried to tie into the travel retail business: 1. As a leader you have to set goals. 2. Be an optimist. 3. Have courage. 4. Relentless preparation. 5. Teamwork. 6. Communication. 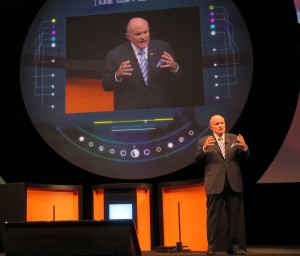 “[Leadership is] most important in periods of change and difficulty,” Giuliani said. “What do you want to achieve this year? Do you want to increase sales, or develop new product lines, for example? Don’t just let it happen to you – if you have a plan you have something to assess your work by.”

“People don’t follow pessimists,” he noted. “People follow the solution to a problem, they follow the person who’s going to offer the best approach. You have to turn the people who work for, and with you, into problem solvers.”

Giuliani’s speech was well received in the Palais auditorium until he got political and partisan with moderator Stephen Sackur, giving his views on President Obama, Donald Trump, and America’s role in the world, which did not play as well with the predominantly European audience.

“I want a president that Mr. Putin and the Ayatollah are afraid of,” he said. “[Obama] kisses the ring of the king of Saudi Arabia. An American president should not kiss anybody’s ring.”

Giuliani predicted a Republican will follow Barack Obama as President of the United States.