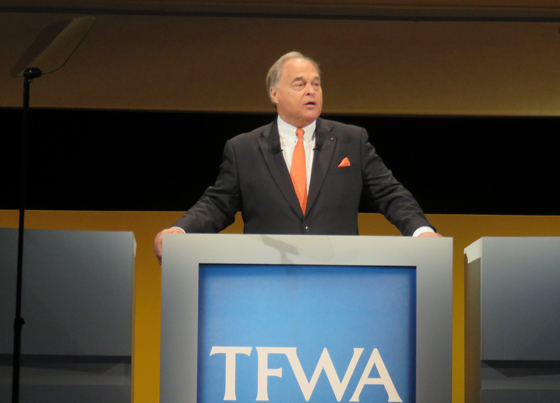 This year’s Tax Free World Exhibition could be summed up in three words—optimism, millennials and engagement.

Despite the change in date of the industry’s premier event—which conflicted both with China’s Golden Week and the beginning of the Jewish High Holy days – over-all visitor numbers were down only 3% versus 2015. Several major U.S. companies were not present, and a number of the Americans who were there left early to get home prior to a threatening hurricane.

Nevertheless, the feel of the show throughout the week was far more positive than last year. The opening morning conference – when TFWA World Exhibition & Conference TFWA president Erik Juul-Mortensen said there is reason to be cautiously optimistic—set the stage for the week.

Following the 2.7% fall in global duty free sales to $62 billion in 2015 – the first decline in six years —  Juul-Mortensen said that the figures for the first quarter of 2016 suggest that the industry is inching its way back to growth.

Total sales grew by just under 1% compared with the same period last year, he said. And while sales in the Americas fell by 8.6%, Asia Pacific saw growth of 5%. The fragrance and cosmetics category is the main driver of this growth, with category sales up 7.8% in the first quarter. Airport sales remained stable, meanwhile.

Juul-Mortensen said that his upbeat view is justified for both macro-economic reasons and because of factors specific to the duty free and travel retail sector. The IMF’s World Economic Outlook study showed that while global economic activity in 2015 remained subdued, global growth, currently estimated at 3.1%, is expected to rise to 3.4% in 2016 and 3.6% in 2017 – a rate that is at least sustained, if not spectacular.

Moreover, the fundamentals that underpin the growth remain strong. Air traffic forecasts predict that people will still be traveling by air in growing numbers.

ACI estimates that passenger numbers will more than double from 2015 to just over 19 billion by 2035. The World Tourism Organization’s report for 2015 showed that international arrivals were up 4%, reaching a record 1.2 billion.

Cruising also shows great potential, he said. According to the Cruise Line Industry Association, demand for cruising has increased by 68% in the past ten years, and passenger numbers are expected to reach 24 million by the end of this year.

Retailers and brands continue to reinvest, reinvent and diversify, he said. Amid the challenges, there remains a strong determination to invest, to improve and to surprise customers. The industry must continue to invest if it is to earn the loyalty of travelers and get back into growth.

The millennial traveler was on everyone’s mind, and TMI will carry future stories on how the industry is striving to adapt to this changing demographic.

‘Luxury’ is no longer about possession, but all about experience, noted Stasiulevicuis. “The traveling population has changed, and there is a much younger traveling consumer coming through airports who wants different things and different experiences.”

In an effort to engage this new consumer, companies in all categories demonstrated how they were using technology innovation at the point of sale. TMI will run more details on this in the coming weeks.