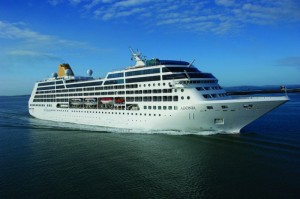 One of the biggest stories of last week was the announcement that Carnival Corp. has been granted approval by the U.S. Department of Commerce to begin direct travel to Cuba. Carnival says that the plan calls for it to start sailing from PortMiami to Cuba in May 2016 on its new Fathom line, which will launch its maiden voyage in April 2016 to the Dominican Republic.

As reported in TMI, Vol. 17-10, Fathom is a new concept “social impact” cruise brand that will offer cruisers the option of working on community projects at the destination. Fathom will meet the current U.S.-to-Cuba travel guidelines which allow licensed travel companies to transport approved travelers to Cuba to engage in activities that support the island’s residents.
The venture must now be approved by Cuban authorities as well.

“We are excited about receiving U.S. approval as the very important first step to ultimately take travelers to Cuba under the existing 12 criteria for authorized travel. We look forward to working with the Cuban authorities for their approval to help make the social, cultural and humanitarian exchanges between U.S. citizens and the people of Cuba a reality,” said Arnold Donald, President and CEO of Carnival Corporation, in a statement.

“We know there is strong demand from travelers who want to immerse themselves in Cuban culture, so this is a historic opportunity for us to enable more people to experience Cuban society. It is also an important opportunity for our new fathom brand to expand its positive influence in the world with this potential to add full-week immersion sailings to Cuba to its already planned full-week social-impact itineraries to the Dominican Republic beginning in the spring of 2016,” he said.

MSC Cruises has announced that its 2,120-guest MSC Opera will begin to homeport in Havana, Cuba, for the winter 2015-16 season. The ship will sail a series of 16 Caribbean cruises from December through April 2016, calling on Montego Bay, Grand Cayman, and Cozumel with two nights spent in the Cuban capital. MSC Cruises will partner with Cuba-based Cubanacan to offer ground services and shore excursions.

U.S. citizens may not sail on these cruises at this time without a special Office of Foreign Assets Control (OFAC) license to travel, or meet other criteria.