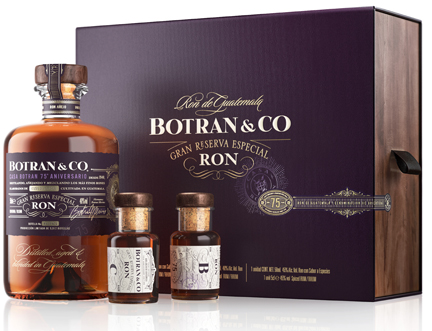 Casa Botran celebrated its 75th anniversary on October 1 with a special party at the Casino de Madrid in Spain, where it present-ed Botran&CO, an exclusive and very limited edition of 9,972 units, especially produced to commeorate Botran’s 75 year history.

Called “an invitation to co-creation and a tribute to bartenders and the world of mixology,” the limited edition was created from the family’s private reserves, which have been aged for up to 30 years.

The Botran&CO pack also contains two small bottles with rum infusions to mix with the first. The first contains a mix of rums that have been macerated with various spices (clove, cinnamon, nutmeg) and the second is a mix of rum with various citrus fruits.

The anniversary event was attended by key member of the Board of Industrias Licoreras de Guatemala, including its chairman, Roberto García Botran, as well as by distributors and distinguished guests from the world of culture, business, restaurants and bartending.