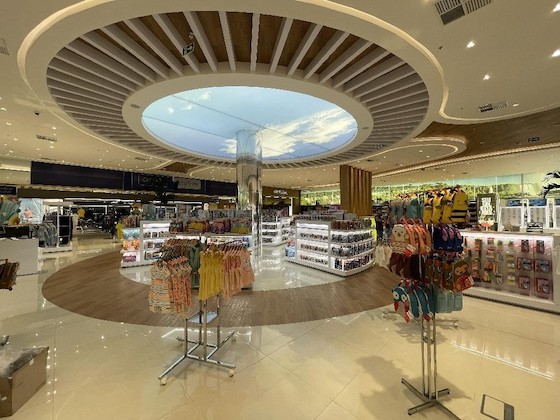 CCR Aeroportos, the company that manages the Foz do Iguaçu International Airport, has signed a partnership with Cellshop Duty Free, the largest land border store in Brazil, for opening a Duty Free Shop at the airport.

The store, which will cover nearly 800 square meters of space, will be located in the domestic departure and is expected to start operating in early 2023. In addition to this main store, there will be a second unit, closer to the boarding gates, with fast-moving consumer goods such as chocolates and snacks, and with some best sellers from the main store.

According to Henriques, the expansion of the Airport’s retail is part of the process of expanding the product and service options in all airports managed by the company.

“Many tourists who cross the border to shop in Paraguay, and also in Argentina, will now have the convenience to buy inside the airport, with super competitive prices,” she says.

The Cellshop Duty Free store will carry a broad assortment, including beverages, perfumes, cosmetics, food, electronics, accessories, clothes, and toys, with national and international brands. Passengers will be able to buy tax-free, and use the $500 allowance per CPF (individual taxpayer number), every 30 days. The store will also accept several payment methods, such as pix, credit and debit cards, and also cash (Brazilian Real and other currencies).

“We are proud to be part of the triple frontier, a land of unparalleled natural wonders and with a tourist potential that grows exponentially. This is directly reflected in this new Cellshop Duty Free project with CCR Aeroportos, in which we will give tourists another opportunity to live an intrinsic experience of that land border, which is the shopping tourism,” comments Jorbel Griebeler, founder and president of Cellshop Importados Paraguay and Cellshop Duty Free.

Foz do Iguaçu International Airport (IGU) is the gateway to a region with world-renowned attractions, such as the Cataratas, in addition to being the main South American border in population and people traffic. Having a duty free shop brings to the airport a complement to the border tourism.

“This novelty will be transformational for the tourist experience in Foz do Iguaçu,” said Henriques.

About CCR Aeroportos
CCR Aeroportos, a Grupo CCR business, operates 20 airports worldwide, with a presence in four countries and nine Brazilian states. With the recent expansion, the company has consolidated its position as one of the largest operators of airports in Brazil. In all, it manages 17 Brazilian airports: São Luís and Imperatriz, in Maranhão; Palmas, in Tocantins; Teresina, in Piauí; Petrolina, in Pernambuco; Goiânia, in Goiás; Belo Horizonte International Airport, through BH Airport, and Pampulha Airport, in Minas Gerais; Curitiba, Bacacheri, Londrina, and Foz do Iguaçu, in Paraná; Navegantes and Joinville, in Santa Catarina; and Pelotas, Uruguaiana, and Bagé, in Rio Grande do Sul. The company also manages airports in Juan Santamaria (Costa Rica), Quito (Ecuador) and Curaçao (Netherlands Antilles). In all these operations, CCR Aeroportos moves about 42 million passengers/year.