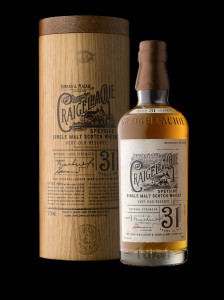 John Dewar & Sons Ltd’s Craigellachie 31 Years Old has been awarded the World’s Best Single Malt at the World Whiskies Awards 2017 presented by Whisky Magazine at an awards ceremony held at the Waldorf Hotel in London on March 30.

“An esteemed panel of internationally recognized whisky experts deemed Craigellachie 31 Years Old as THE best single malt whisky in the world, beating competition from hundreds of entries from across the world,” said the company announcement.

Craigellachie Single Malt originally launched into Global Travel Retail in September 2014, making this a highly notable accolade for a whisky which has only been available in market for less than three years.

Georgie Bell, Global Malts Ambassador comments “Since launching, Craigellachie has built up a huge reputation in the on-trade and with whisky connoisseurs – it’s sought out and admired – and the accolade is true testimony to this.”

“It shows how far the Craigellachie brand has come in the last three years, and how from a production, maturation and blending perspective we really are second to none,” he added.

Craigellachie 23 Years Old was also crowned as ‘Best in Show’ at the San Francisco World’s Spirits Competition in 2015.

Global Travel Retail is still the principal market for Craigellachie Single Malt, which is available in only limited outlets in a few domestic markets.