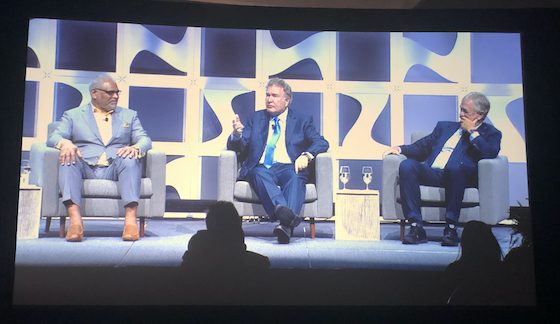 Amid fist bumps, masks and stringent health and safety protocols, the cruise industry came together for its first live gathering at the 35th Seatrade Global Cruise Conference in Miami during the last week of September. Even as the organizers knew that travel restrictions would keep attendance to a fraction of its normal 8,000+ of years past — and thus created a hybrid event–they welcomed the opportunity to begin the return. While much quieter than in the past, excitement and anticipation was nevertheless very high.

Andrew Williams, President of the Maritime Portfolio, Informa Markets, which owns Seatrade, opened the main conference morning thanking the attendees who had undertaken all the various protocols required to enter. Under the theme of “Building back together,” he said that the industry is focused on the future together.

Pierfrancesco Vago, Executive Chairman, MSC Cruises, speaking as Global Chairman of industry trade group Cruise Lines International Association, also stressed the industry’s commitment to the health and safety of its guests in his keynote address, citing the fact that the cruise industry has instituted the most stringent protocols in the world, and was the first to mandate 100% testing.

Speaking during the State of the Industry panel discussion, Richard Fain, chairman and CEO, Royal Caribbean Group, said he expects ships in core markets to be back to 100% occupancy by the end of this year.

Vago noted that two million people have been able to sail since last summer, and MSC, which was the first cruise line to resume sailing, set the blueprint for returning to cruise. 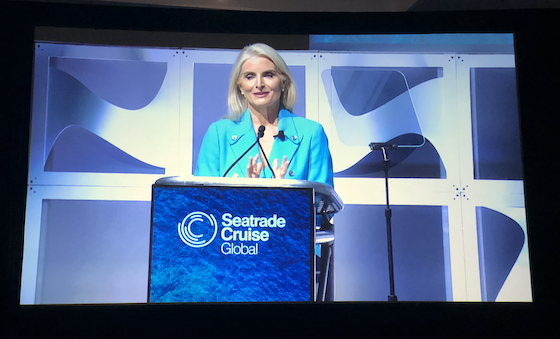 In her keynote, Kelly Craighead, President & CEO, Cruise Lines International Association said the past year and a half has been the “most extraordinary period the industry has ever faced. None of us could have predicted at the start of this pandemic just how profound the impact would be on our businesses, our industry and our lives.”

She noted the scale of the effort in response under tremendous pressure, and the success achieved, all while focusing on the human impact.

Keeping health and safety foremost in our minds, she said that the cruise industry can control the environment more on a cruise ship than on any land-based tourism, and using science-based protocols –which not only assures health and safety but also raises confidence – the industry response to the pandemic has been most comprehensive and far reaching, providing layers of protection.

The virus is continually evolving and the industry’s protocols continue evolving, as well, she said.

On a global scale, cruising has resumed in more than 30 countries. Like Pierfrancesco Vago, she reaffirmed that the pandemic notwithstanding, the cruise industry will continue to stress issues of sustainability.

Mentioning the Green Deal in Europe, which is clearly setting an agenda for the future, she said that   public/private partnerships will be imperative for success.

“To move forward we must continue engaging with port communities to benefit all, including service providers and suppliers, and react in creative ways to the continuing challenge’

“If there is a silver lining in all this it shows that our community when it works together is greater than the sum of our parts. Now we have to build on this. We are on course for a terrific revival.”

State of the Industry panel

Cruise leaders at the keynote panel discussed how health protocols are working, guest satisfaction is high and occupancy is climbing.

Arnold Donald, president and CEO, Carnival Corp. & plc, said that with 11 ships now sailing, Carnival expects to reach 80%. “We are coming back,” he said. 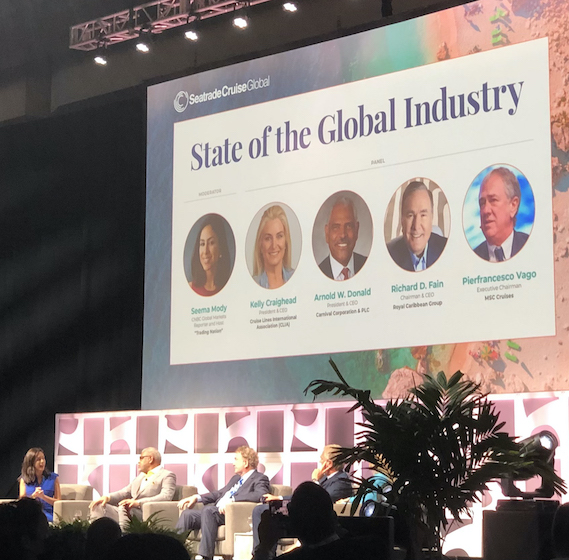 Royal Caribbean’s Richard Fain, stated the consensus that the cruise companies, while friendly competitors, never compete on safety and health: “We have a history of working together. We came together quite frequently to pursue common goals, processes and protocols. Other industries are now looking at what we have done,” he said.

Carnival’s Donald pointed out that people are more used to the risks of the coronavirus in their lives now, and therefore more people are comfortable with the cruise environment, especially under all the protocols and safety measures.

With the launch of the first Virgin cruise ship, Virgin Lady, just days after the Seatrade event, panel moderator Seema Mody of CNBC, raised the questions of competition. All the panelists said they welcomed the new addition, which they see as bringing more people to cruising.

“We don’t compete with each other as much as we compete against hotels and other leisure-based vacations,” noted Fain.

“We are really a tiny part of the global travel industry, with 30 million cruisers pre-COVID,” added Arnold. “We still have a huge opportunity to grow.”

CLIA President and CEO Kelly Craighead presented a masterclass in how not to respond to a politically charged question when asked to comment on the difference of working with the administrations of former President Trump and current President Biden, as well as with Florida’s controversial Governor Ron DeSantis.

“Gov. DeSantis is a strong supporter of the cruise industry, don’t believe all of what you read,” Craighead said, adding that the industry has to deal with hundreds of administrations around the world.

The panel also discussed the industry’s commitment to the environment, including alternative fuels to meet decarbonization goals, and controlling greenhouse gas.