The rapid development in seat capacity between the US and Cuba following an Obama-led revival in relations has gone into reverse according to travel retail analyst, research and category expert Counter Intelligence Retail – and Donald Trump’s latest policy intervention is not going to help.

High hopes of US duty free and travel retailers expecting to make gains from new routes to Cuba will have to be moderated somewhat in the light of a changed travel outlook.

Traffic data from CiR’s traveler statistics tool, Business Lounge, has found that, from a standing start of zero seats in April 2016, US scheduled air traffic to Cuba grew rapidly to peak in January (189k seats) before falling away to 152k seats by May.

“The slide backwards is partly the result of airlines over-estimating the value of new direct routes while Donald Trump’s twitter comments about the country last year would not have been much help,” says Garry Stasiulevicuis, President of Counter Intelligence Retail. 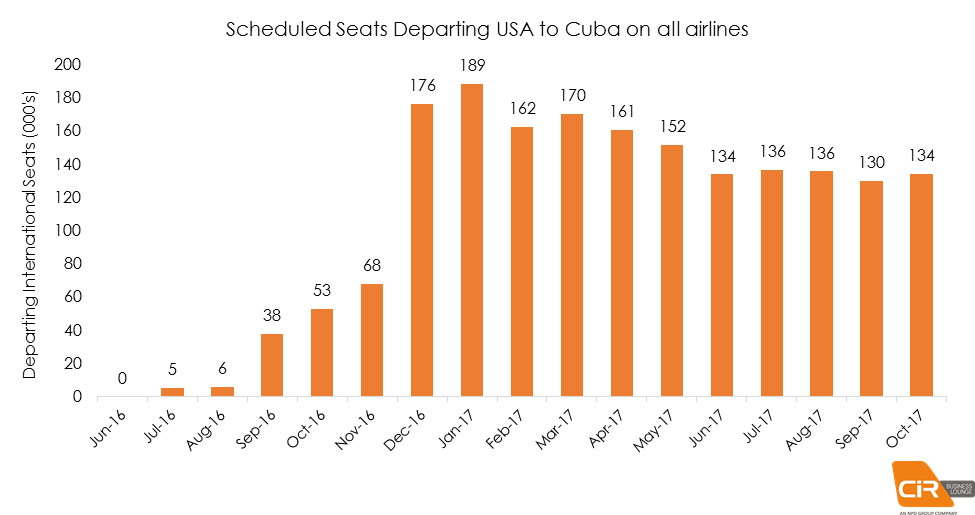 In November 2016 Trump (then president elect) said that he planned to roll back some of Obama’s efforts to normalize the US-Cuba relationship. Last Friday, President Trump declared a clampdown on US business dealings with Cuba’s military and tightened restrictions on Americans traveling there.

The Cuban military is said to control 60% of the economy including hotels, airports, construction and telecommunications.

“Even prior to [the President’s] speech, our forecast to September 2017 indicated a further fall in available seats (to 130k), which is a sizeable slide of -31% from the January peak,” says Stasiulevicuis.

White House officials have said that 12 categories of travel will be maintained but that individual travel will be banned. A White House statement notes: “Travel for non-academic educational purposes will be limited to group travel. The self-directed, individual travel permitted by the Obama administration will be prohibited. Cuban-Americans will be able to continue to visit their family in Cuba and send them remittances.”

A market reset – the airports affected

Since scheduled flights took off in December 2016, three airlines – Frontier, Silver Airways and the low-cost carrier Spirit – have announced they are suspending their routes to Cuba, citing reasons such as lack of demand, over-capacity and non-profitability.

Meanwhile bigger airlines have also cut capacity by almost -30% (when comparing October 2017 versus January 2017) by downsizing to smaller aircraft or reducing their number of flights, but in most cases keeping the same number of routes.

“Clearly there is going to be a market reset in the coming months as airlines reassess their capacity in the light of the new policy,” says Stasiulevicuis. “The months ahead will be a period for carriers to recalibrate both demand and profitability going forward.”

The airports affected the most by the airline reset are in Florida, home to the biggest Cuban-American population in the US with a 68% share (source: 2010 census). Miami International Airport has a 37% slice of the air market, followed by Fort Lauderdale International with 35% (source: CiR Business Lounge).

Airports next in line command just a 4% share each and include New York’s JFK and Newark (EWR), Los Angeles (LAX) and Tampa (TPA) in Florida.

The main Cuban destination for flights is Havana (HAV), but Varadero (VRA), Santa Clara (SNU), Holguin (HOG), Camaguey (CMW) and Cienfuegos (CFG) airports also have direct flights (based on schedules from May until October 2017).