Powerhouse travel retailer Duty Free Americas is aggressively expanding its reach throughout the hemisphere, opening new operations in Latin America and the Caribbean and renovating key locations in its stronghold North America market.

The expansion comes just as the company is beginning to see a recovery in much of its business, DFA CEO Jerome Falic tells TMI during a recent meeting in the company’s Hollywood, Florida corporate headquarters.

“Business has picked up quite a bit and this year is off to a positive start. We are starting to see some Brazilian traffic come back in Miami and we are also seeing Argentineans coming in, which is nice to have. This is definitely a customer that has not been around for many years,” he says.

The company currently has more than 150 duty free stores and international brand boutiques in airports, border crossings and seaports in the United States, Latin America and the Caribbean, and even Asia.

Despite the troubled economic environment in Latin America over the past few years, DFA appears to have taken advantage of many new business opportunities.

“As of today, we have more than 70 locations opened throughout South and Central America and the Caribbean, and will soon have more than 80,” DFA CEO Jerome Falic tells TMI during a recent meeting in the company’s Hollywood, Florida corporate headquarters.

Brazil has been a big focus for the company over the past year, and the company now ranks as the second largest travel retail operator there behind number one Dufry. In addition to duty free and duty-paid airport stores, DFA is boosting its presence with a chain of innovative coffee shops, and to date has opened 16 of approximately 20 stores planned, says Falic.

When completed, these points of sale will comprise approximately 45,000 square feet retail space, and cover duty free stores, duty-paid and luxury brand travel retail boutiques, as well as a chain of coffee shops. They will be serviced by DFA’s 40,000 square foot logistics facility in Curitiba.

In October, the company had further reinforced its presence in Brazil by the opening of a 5,500 square foot duty free store in the post-customs arrivals area of Porto Alegre’s Salgado Filho International Airport.

In November, DFA Brazil announced that its new Food & Beverage Division had opened five coffee shops in Curitiba’s Afonso Pena International Airport, under the brand name THE CAFÉ by DFA. These are the company’s first airport coffee shops and are strategically positioned in highly visible locations throughout the airport’s arrival and departure levels, says the company. 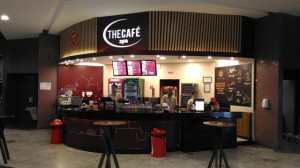 One of the five attractive The Cafe by DFA coffee shops now operating in Curitiba’s Afonso Pena International Airport.

“We just opened (in May) a duty paid store in Zumbi dos Palmares International Airport in Maceió, (approx.. 2 million passengers annually), with a duty free store to follow. And Salvador is next,” says Falic.

“All the airports will have both duty-paid and duty free stores, with the exception of Congohas, which is only duty-paid,” he added.

“Our existing Brazilian stores and our other stores that are currently underway in other parts of the country are a testament to the confidence we have in the long-term potential growth of Brazil’s economy. We are very familiar with the spending habits of Brazilian consumers due, in large part, to the fact that many of our duty free customers at Miami International Airport are Brazilian, so our transition into Brazil over the past year has been very smooth and natural,” said Falic adding special thanks to Michael Dinar, who spearheaded much of the openings as president of DFA Brazil. 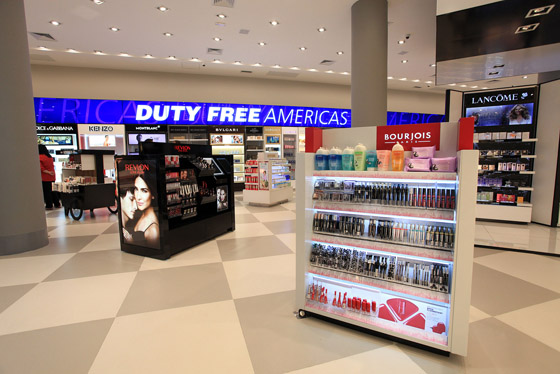 More than doubling its presence in Colombia

The company has also been aggressively expanding in Colombia. In addition to four stores it has operated in Bogota’s El Dorado International Airport for several years, DFA has opened five stores in Barranquilla, two in Cartagena, two in Medina and four in airport at San Andres.

“We are seeing tremendous crowds in our stores in San Andres. It is such a popular resort town and our walk-through store is doing very well there,” notes Falic, who says he is also seeing a pickup of business in Chile, where DFA operates four shops in the Zofri Mall in the Iquique Free Zone.

DFA is also now seeing a major turnaround in Uruguay, where the company operates seven stores on the border with Brazil in the towns of Rivera, Bella Union, Rio Branco, Chuy, Acegua and Artigas., says Falic.

DFA’s seven border stores in Uruguay carry a range of products from fragrances and cosmetics, as shown in the rendering of the new store in Bella Union, to luxury goods as shown in the Rivera store below.

“Our business in Uruguay this year is excellent. We are up around 48% over last year. Business is definitely starting to come back,” he confirms.

One of the company’s largest projects in the region is the construction of a huge $40-million shopping mall – hotel complex in the border town of Rio Branco. The project was put on hold during the worst of the fiscal crisis in the region, but construction is now underway and scheduled for completion in March 2018.

“DFA owns the entire mall and will operate a 10,000 sq meter duty free store that will be offering the best brands in fragrances and cosmetics, fashion and luxury goods, homeware, sporting goods, electronics, camping equipment, toys and confectionery. The duty free store will also feature a wine cellar with a huge mix of wines, drinks and beers, as well as a gourmet section,” says Falic. 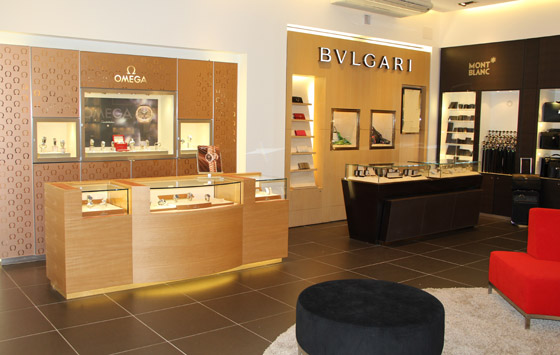 The Mall will include a food court and 11 other shops, including a bank, pharmacy, and super market as well as house a bus terminal, services that are not available now.

The Mall will also provide 700 parking spaces, a key feature designed to make shopping easier, notes Falic.  “This is a big plus, since there is no place to park now,” he says.

In Phase 2 of the project, DFA will construct a 60-room, 4-star hotel with a casino: “We are making Rio Branco a destination,” he says.

DFA has also strengthened its presence at Panama’s Tocumen International Airport, where it is opening several news & gift shops news and a Bar concept similar to the airport bar it operates at Punta Cana Airport in the Dominican Republic.

“We are also in the process of opening two specialty fashion boutiques at Tocumen, for Ralph Lauren and one for Kate Spade, as well as two new stores in El Salvador and Honduras,” says Falic.

In the Caribbean, DFA began opened an arrival and a departure store in Haiti a few years ago, which Jerome Falic says are going well, even as the airport is small.

“We recently opened a candy and toy store and some news & gifts, in addition to several arrivals and departure stores,” says Falic.

DFA also still has three stores in Venezuela on the border with Colombia and the border with Brazil, but they are closed at this time due to the political situation in that country.

“You cannot bring money out of the country so there is no advantage to being open now. But when we were open we had tremendous traffic. One of our best stores was on the Venezuelan border with Colombia. We have a huge store there that was built many years ago. We are hoping that it will come back soon,” comments Falic.