The Diageo Global Travel team crowned Celebrity Cruises’ Santos Mercedes Enriquez, of Peru as the winner of the cruise category in the 2015 World Class Bartender of the Year competition. Enriquez won the honor after competing against two other semi-finalists at the World Class Global Travel Final in the deluxe Diageo 396 Bar in Miami, Florida on July 9.

The final three cruise line bartenders triumphed over 5,500 mixologists for the opportunity to compete to represent Diageo Global Travel at the World Class Global Grans Final taking place in Cape Town, South Africa on August 28 – September 4, 2015. As the winner, Enriquez will now battle it out against 50 of the world’s best bartenders for the coveted ‘Bartender of the Year’ title.

All 5,500 bartenders took part in Diageo’s global bartending training program which seeks to elevate the bartending craft and revolutionize fine-drinking experiences for cruise line guests. They then participated in a series of competitive heats to find the top three. 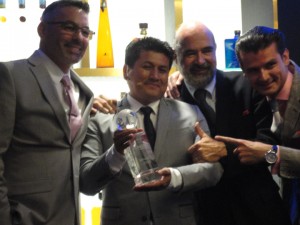 Santos, who is a senior bartender onboard Celebrity Cruises’ Celebrity Equinox, was joined at the Miami competition by Norwegian Cruise Line’s Wade Cleophas, of South Africa, who is head mixologist on the Norwegian Epic; and Royal Caribbean International’s Shekhar Grover, of India. Grover, a mixologist on RCL’s Anthem of the Seas, is a returning competitor, having won the Global Travel WORLD CLASS Final last year and competed at the 2014 WORLD CLASS Grand Final in London.

Louise Higgins, Regional Marketing Director, Diageo Global Travel Western, commented: “Diageo Reserve World Class is at the forefront of mixology, taking great strides in creating luxury drinking experiences. The global training initiative is widely recognized as a mark of distinction in international fine drinking culture – it is one of the industry’s largest investments in creating luxury drinking experiences.
“We are delighted to partner with three leading cruise lines in the Global Travel program for 2015. Together we want to ensure that we are constantly challenging the boundaries of contemporary and experimental on board cocktail culture. Our continued investment in the initiative demonstrates our commitment to the cruise industry and our confidence in the commercial growth opportunities the sector has to offer.”

10,000 bartenders trained
Following a brief introduction by Louise Higgins, Sandra Vaucher, Director of Global Cruise and Airlines at Diageo, welcomed the audience to the third year of the World Class GTME program. 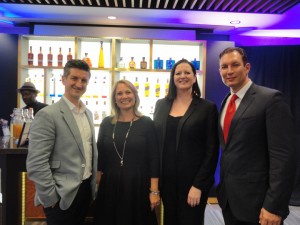 “We couldn’t have done this without the partnership we have – with the goal of elevating the craft of cocktail making to please guests and give them a fantastic experience onboard. A big thanks to RCL, NCL and Celebrity, who share our goals and believe in the craft of cocktail making and bringing it to life on the high seas. Three years ago when Diageo opened the first program, our goal was to train 10,000 bartenders. We have met that goal in only three short years. I am really pleased with the partnership and the support that made this happen. 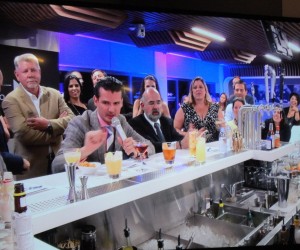 “We firmly believe in the experience of elevating cocktails, and over the next few years would like to see all bartenders in all cruise lines to be able to experience World Class. That is our goal going forward.”

Spike Marchant, World Class Global Brand Ambassador who has been with World Class since its beginnings and helped design the program, said that cruise bartenders from 57 countries participated this year.

The Food & Beverage directors from the partnering cruise lines told TMI that the benefits of the program extend far
learning to make a fine cocktail.

Lorenzo Davidoiu, Director Food & Beverage Operations, Celebrity Cruises, pointed out that the World Class program is generating interest from both within the company and externally.

“Our crew is getting so excited. We have a lot of chatter on the private Facebook page, with words of encouragement for Santos (the eventual winner), and this has gotten exponentially bigger every day. We are also planning to hold a World Class party for the crew. This is also generating excitement and deserved recognition and appreciation of our partnership.

Celebrity, of course, also has the distinction of having the first World Class Bar on a cruise ship, a program that will roll out to all of its ships by the end of the year.

“So this is the perfect venue to promote the winning World Class Cocktails. In addition, the Diageo training has brought our bartenders to a new height and this is World Class,” added Davidoiu.

Kornel Toth, Director Food & Beverage Operations, Royal Caribbean International, was until recently with Celebrity and was one of the people behind the launch of World Class bars on Celebrity. “I really love the products of World Class, and I wanted to do something that would become a pinnacle of the brands. I am truly proud of the World Class Bar on Celebrity, even as I am with the sister cruise brand right now.

RCCL, which has private islands in Labadie, Haiti and Coco Key, the Bahamas, and Toth explains that it is part of the company’s mandate to “elevate and focus on the Caribbean. Our name is ‘Royal Caribbean’ and we really want to give our guests a real taste of the island experiences.” The Cariobbean has so many different nationalities each with its own products and tastes.

“We are looking to Diageo to work with them on spirits like this. This World Class competition works right in with our main strategies, which is to ‘build on talent.’ I sarted with RCL 16 years ago as an assistant waiter. And 14-15 years later, I am the director of F & B operations. Our president started as a purser onboard. There are huge opportunities here. We build on talent. Our leadership makes sure this happens.

“Shekhar, our finalist, who is a mixologist, will be able to carry on this spirit and enthusiasm and will be able to go far. This is how we build on talent. We are creating a new avenue and a new beverage feel. We follow ‘drink responsibly’ but you can really enjoy a good cocktail. This is a new age of craft cocktails – people can really enjoy a good cocktail as much as you enjoy food. We are thinking of elevating it even more. People know about wine dinners. We would like to take that further—have a rum dinner, a whisky dinner. This is a new opportunity. 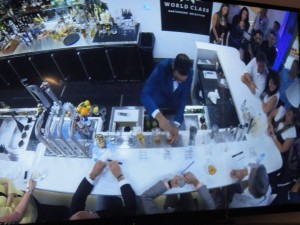 Wade Cleophas demonstrates his craft for the judges.

“Our top bartender interacts with hundreds of guests weekly, not only on an individual basis at the bar but also up on a big stage in the theater. We do presentations. This is how we would like to build on the World Class concept.

Wes Cort, Director, Beverage Development, Norwegian Cruise Line
As a follow up to World Class, whether or not Wade goes on, he is moving on to our new ship the Escape as Head mixologist. This is a new position, created this year, with the thought to have somebody onboard focused on making great beverages. We will have a Head Mixologist on every one of our ships, and we are promoting Wade – I am not sure he even knows yet. As another part of the World Class program we promote the competition with cocktail specials. We have done this the past couple of years, but this year we are especially excited since we can feature one of our own bartenders’ cocktail creations!
This is how we will move forward, which is entertainment, food, beverage, all going to the next level. Wade exemplifies what we want to do. It is very challenging in an industry that is so high volume to make great cocktails. We have learned a lot from what Diageo has done with its bartending academy- like batching cocktails and putting together your best cocktails and featuring those. By far, Diageo has the best bartending training at the World Class academy. We really appreciate the training and the support. Please do not give it up.”
← Previous Post
Next Post →