Who would have imagined how prophetic the name Duty Free Americas would be when the Falic Group bought the company from BAA back in 2001? At that time it was the largest duty free operator in North America, with stores in airports and along the northern U.S. border with Canada and the Southern border with Mexico. Today, DFA’s business has burst through those borders, expanding throughout parts of the Caribbean, Central America, and as far south as Brazil and Uruguay in the Mercosur, not to mention as distant as Macau in China and Israel. 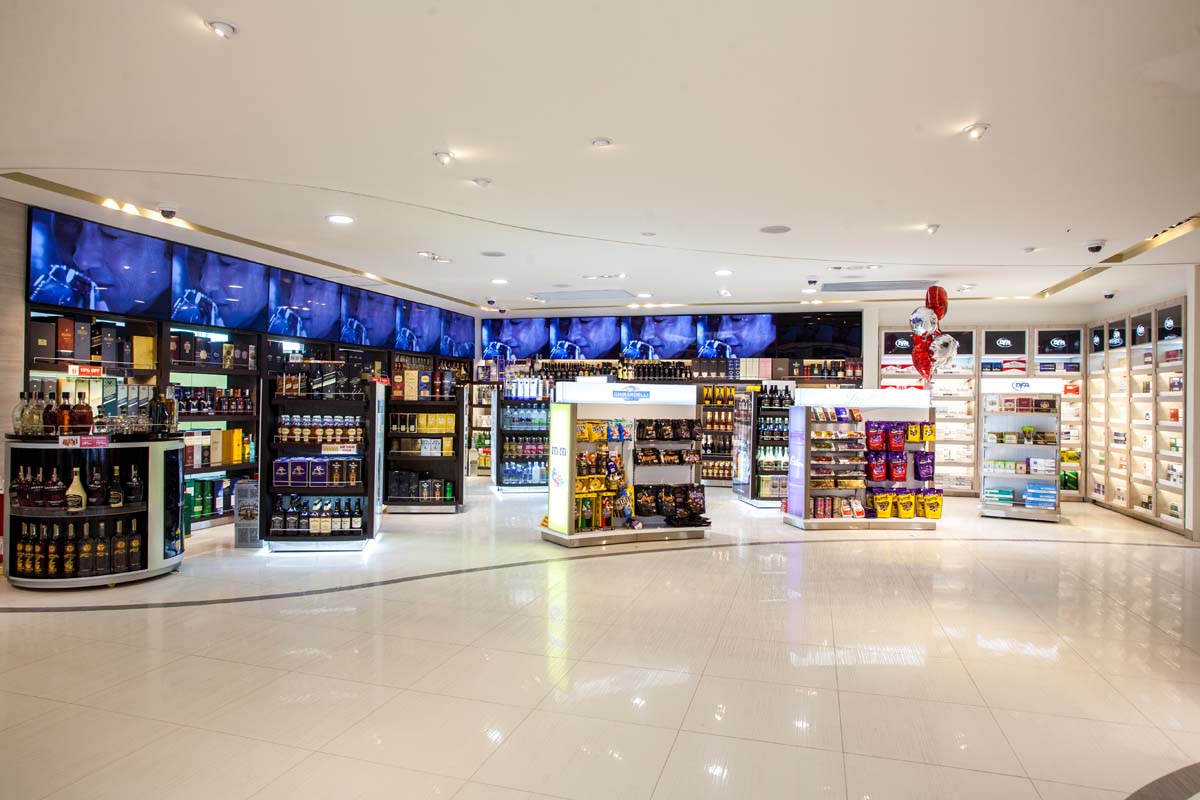 DFA is now operating five stores in Punta Cana with more underway. Shown here is the new Arrivals store in Terminal B.

When Falic brothers Simon, Jerome and Leon bought the company then known as World Duty Free Americas (the former Duty Free International) for a reported $121 million just a few weeks after 9/11, they were taking a huge gamble on the future of the industry. But with annual sales now north of $1.2 billion, the group is a leader in the travel retail industry with more than 150 duty free stores in major international airports, borders and ports in the United States, Latin America and Asia.

The company also encompasses a News and Gift store division, and an extensive distribution business, covering both duty free and domestic distribution of spirits, wines, fragrances and accessories, with operations in Mexico, Puerto Rico, Colombia, Honduras, Aruba, Belize and Panama.

Additionally, the company has expanded into the business of creating perfumes and spirits and wine.

Its Falic Fashion Group division creates and distributes fragrances under license for Perry Ellis, the Original Penguin, and Eva Longoria, among others. It has also been producing the Animale fragrances since 2003. Through its Innovative Liquors division, the company produces a range of brands including Bear Hug Infusions, Stars & Stripes Vodka, Caribana Sol rum, Shannon Irish Cream, and more.

The Falic family also acquired the Hard Candy and Urban Decay beauty brands in 2002, [Urban Decay has since been sold and is now part of L’Oréal] and acquired the Christian Lacroix fashion house from LVMH in 2005. On top of that, they have invested in a vineyard in Israel, and gas stations along the U.S. border with Canada, among other projects.

But the core of the business remains its duty free shops. At this writing, the company operates more than 150 duty free stores throughout the Americas, plus a luxury duty free store in Macau and an airport store in Ovda in Israel.

Its newest initiatives range from Washington’s Dulles Airport in the U.S., to new airport stores in Haiti and the Dominican Republic in the Caribbean, to major border and free zone projects in Uruguay and Iquique, Chile in South America.

“We plan to be around for a long time, and to continue growing, even in Brazil,” DFA President Leon Falic told TMI from his office in Panama in the striking Global Bank building. All of DFA’s Latin America and Caribbean businesses report into the Panama headquarters.

“In the Caribbean, we are investing in Haiti right now. We just opened a brand new big arrivals store in Haiti and now we are completing a big departures store. We are very pleased with the business in Haiti. We basically rebuilt the whole area of the airport,” he reports.

The company also continues to invest heavily on the other side of the island, in the Dominican Republic’s Punta Cana Airport. 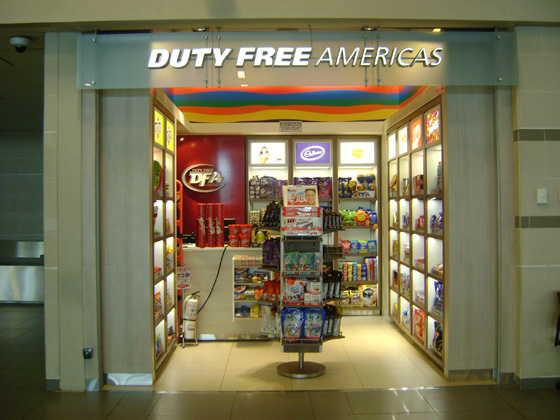 The DFA Chocolate Shops in Bogota’s El Dorado International Airport, one of four duty free stores it operates in the airport.

“In Punta Cana we now operate five stores. We just completed a second new store and are rebuilding the original store as well as building another completely new store. We just opened a really nice Luve Champagne bar, as well as a Coach boutique and watch store. Next we are opening shops for Montblanc and Tumi shops.”

Falic notes that Punta Cana has been a very popular destination for Russian tourists, who are important duty free shoppers. The recent drop in the number of Russian tourists is being felt in lower sales, although he feels that the Russians will begin traveling again as soon as their currency stabilizes.

“Meanwhile, we are seeing growing numbers of American and Canadian tourists,” he says.

The company is especially focusing on the borders in Uruguay.

“We have a big presence in Uruguay, and are probably the largest border operator in Uruguay today; we have a very big footprint there. We now operate in six of the major borders with Brazil, in Rivera, Chuy, Acegua, Bella Union, Rio Branco and Artigas. Our stores in Uruguay are completely different than our other stores because they are more like department stores than the more traditional duty free stores.

“And we continue to invest. We just completed a major renovation in Rivera. In Rio Branco in Uruguay, we are building a major $40-million shopping mall with developer Garbarino Lombardo. In addition to being one of the developers, DFA Uruguay will occupy the 4,000 sqm anchor store, which we expect to be opening in the middle of this year.”

Chile is another growing market for DFA’s Latin American business.

“We now have three stores open in the Zofri Mall in the Iquique Free Zone in Chile, with plans to open a fourth. And we are waiting for the go ahead from Brazil Customs to open our first store in Brazil at Afonso Pena International Airport in Curitiba, where we won a 10-year contract last year.”

Looking ahead, Falic says that even though 2014 ended up with sales ahead of the year before, he expects the current year will be tougher, especially with important currencies in Europe and Brazil under pressure, as well as the Mexican peso.

“Currency is a challenge in Latin America in places like Uruguay now, but we are still investing in the business; we are still growing. Venezuela is also tough, but people are still buying and we are still doing business there.”

Falic credits the family-owned and operated company’s strong management for its ability to weather the challenges of the market:

“Duty Free Americas offers good assortments, depth of product, great managers and the best buyers,” he says. “We have people that are on top of the business, always making sure we have product on the shelves, making sure that we are offering newness. I think we are very good at this.

“The family aspect comes in also, especially with the new generation of the family joining the business. As we always say, we are here for the long term,” concludes Falic. 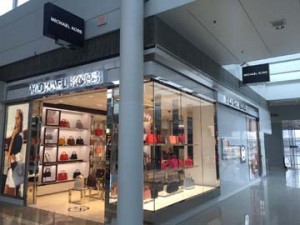 “We are finding that these branded boutiques are attracting shoppers,” confirms Jerome Falic, who has opened similar boutiques in Miami International, New York’s JF Kennedy International, and Hartsfield-Jackson Atlanta International Airport, among others. “The airport authorities in the U.S. were looking for ways to make their stores more appealing to travelers and are turning to boutiques, more like in Asia. In many cases, the same customer who shops in the duty free store is shopping in the boutiques, but it is a different type of purchase, say in a Coach or Burberry store, than it is in the traditional shop,” he notes.

As we go to press, the International Council of Shopping Centers (ICSC) announced that MarketPlace Development, the concessions development and management company for the Metropolitan Washington Airports Authority (MWAA) which operates Washington Dulles International Airport (IAD) and Ronald Reagan Washington National Airport (DCA), was awarded the Gold MAXI in the “NOI Enhancement” category. The NOI Enhancement category recognizes notable properties that significantly enhanced net operating income for their centers. MarketPlace Development has redeveloped 90% of the food and retail offerings at the Washington airports within the past 36 months. Several of the DFA boutiques were cited in the Award announcement.