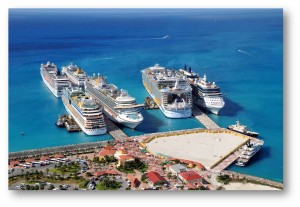 In addition to the Shiseido store it opened in Guadalajara, Mexico, travel retail specialist Duty Free Partners has recently opened a Sky Free Shop duty free store at the cruise port in St. Maarten, in partnership with a local Liquor, Tobacco and Confectionary Distributor.

Fabiano Vivacqua, Duty Free Partners CEO, is very optimistic about the potential of the new cruise port store: “St. Maarten handles the biggest volume of cruise ships in a single port in the Caribbean, it is huge,” he tells TMI.

DFP has only opened the perfumes and cosmetics part of the store at this time and will develop into the other categories later on, since the retailer is still in the process of renovating and furnishing the store: “The store is not the way we want it yet but we did not want to lose the high season,” says Vivacqua. “We will keep the store up and running even as we fix it the way it should be.”

“The Port at St. Maarten operates all year long, it does not have just one specific season. We want this store to be very nice. It is the first and last point of contact with the passenger to the island. This is a very exciting project for us.”