One year after taking over as Executive Director of the Frontier Duty Free Association (FDFA), Barbara Barrett tells TMI that the Canadian land border duty free association is prioritizing the return of the Visitor Rebate Program.

In 2007, Canada became the first country in the Organization for Economic Co-operation and Development (OECD) to cancel its Visitor Rebate Program. A recent study by the Retail Council of Canada shows that by canceling the program, tourism GDP was reduced by $5.96 billion dollars over the past ten years.

Barrett says that with multiple retail and tourism-related organizations calling for the reinstatement of the program, the FDFA is optimistic the Visitor Rebate Program could return some day. 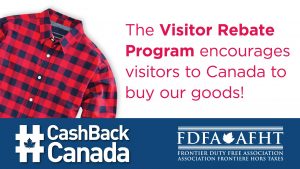 “We are focusing on our most important issues and I think you can tell from our social media campaign that one of our big initiatives is the return of the Visitor Rebate Program. It is the main priority for our government relations. We are not alone in this ask. The Retail Council of Canada is asking for the same thing, the tourism industry is asking for the same thing, the Hotel Association is also looking at its return. It won’t happen tomorrow, but we are in it for the long haul,” says Barrett.

“We are in a strange period with an election year. Our goal really at this point is to have the Visitor Rebate Program on an election platform and to have it top of mind for those who are elected.

“We are asking that, at least in part, the program be administered inside land border duty free stores, which is how the program operated in the past.”

Barrett says the FDFA is now more well known by Canadian government officials than it was when she took over as Executive Director a year ago.

“When I came onboard a year ago and took meetings on the Hill, talking to government officials about the Frontier Duty Free Association, we were really reintroducing ourselves. Many folks on the Hill were not aware of who we were, let alone what our issues were. It took some time to rebuild those relationships, but we really put FDFA back on the radar in terms of our government relations.”

The FDFA announced the name of its annual Convention, Beyond All Borders, which will take place from November 11-14, 2019 in Toronto.

Barrett says the convention theme, Partnering for Growth, is set to inspire current and prospective members to work together to promote the Duty Free industry in Canada and beyond.

“Partnering for Growth is a call-to-action directed at our partners and convention attendees as a way to inspire like-minded industry professionals to work together to position Canada as a global leader in the Duty Free Sector,” says Barrett.

A four day event, the convention format has been re-worked to begin on Monday, kicking things off with an Airport Day. The Airport Day gives FDFA suppliers the opportunity to coordinate meetings with some of their largest customers (airports). Through a collaborative lens, the Airport Day will build on the Partnering for Growth theme.

“We are returning to the Omni King Edward Hotel this year as its private spaces were conducive to our meeting and networking needs,” says Barrett. “We will continue to offer buyer group presentations, and are excited that the new Central Hub will include convention registration, breakfast, lunches, coffee bar, happy hour bar and a few exhibit stations.”

Building and learning from our successes of last year, “The Imperial Awards Gala has also been moved, now taking place on the third night, Wednesday November 13,” says Barrett. “We wanted to create a forum where partners and guests can come together to grow their businesses; share ideas to create a network of innovative solutions, only concentrating time and energy on the most productive concepts that grow our members’ businesses,” concluded Barrett.

In addition, after a review of the Gold Standards Awards program, the FDFA has launched a new refreshed program. The changes include expanded eligibility, streamlined voting, and the addition of two awards: Star of Show for the convention and Outstanding Contributor Award. Finalists will be announced October 30, winners recognized at the Imperial Gala & Awards Evening on November 13 in Toronto.