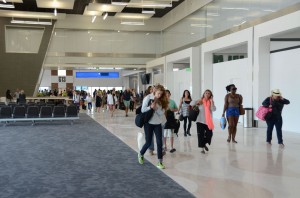 The new G concourse at FLL

Officials at Fort Lauderdale-Hollywood International Airport opened the first new concourse at the airport in more than a decade last week. Two gates in the new Concourse G in Terminal 4 began handling passengers on July 14, the first (western) part of a $450 million expansion and modernization project that began in 2013.

The new terminal, being built in two phases, is scheduled for completion in 2018. Construction on the eastern phase of the project will begin later this year.

Flights will continue to operate at Concourse H throughout construction, until that concourse is removed in mid-2017.

The new Concourse G will provide passengers with expanded food and shopping options – including an improved duty free offer — in about 34,000 square feet of concession space — 2,000 sqf more than is currently in use.

The Duty Free concession is operated by Broward Duty Free – (DFASS, C.W. Hope Consulting) in a contract that runs through December 31, 2024.

“T4G Duty Free will ultimately be a 3,000 sqf space allowing the addition of expanded ranges and new categories of product,” said Meyer. Phase I of the new shop will be 1,175 square feet and Phase II will be the remaining 1,825 square feet.

When completed, Concourse G will have 14 gates. Twelve of those gates will be “swing” gates that will handle both domestic and international flights.