The future of long-haul travel is bright for most of the world for the coming year, forecasts ForwardKeys.

The exception is travel to the United States, “where the climate is expected to be somewhat cooler than the rest of the world,” says the company, which analyzes 17 million flight booking transactions a day.

As reported last week with the latest UNWTO numbers, long-haul travel delivered an outstanding year in 2017.

The only negative was the Americas, where growth was virtually frozen – it was just 0.1% up on 2016.

Looking at the travel forecast for the first Quarter of 2018, long-haul flight bookings are 10.4% ahead of the equivalent moment last year. The notable exception is the USA, says ForwardKeys, where bookings for international arrivals are just 2.6% ahead.

The travel forecast for the Americas is one of contrasts. Overall, bookings are 4.8% ahead. The USA is at the lowest end of the spectrum, with the increase in booking approximately 2% lower than the average for the continent. Canada, on the other hand, looks set to experience strong growth in inbound travel due to Chinese visa facilitation and an increase in capacity from India.

The climate for regional and long-haul outbound travel in Latin America will be led by favorable bookings from Mexico in the north and hot travel conditions in the south, where Argentina, Brazil and Chile are all expected to continue growing at double-digit rates in Q1 2018. 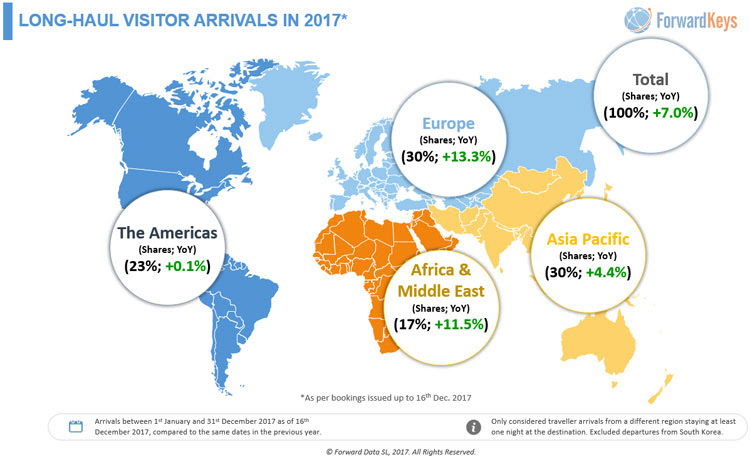 Current long-haul bookings for the Asia Pacific region are running 12% ahead of where they were last December. Outbound bright spots include Australia, New Zealand, India and China, where economic growth is stimulating demand for travel, coupled with capacity increases.

Travel to South Korea is still suffering from the THAAD missile crisis and the deep setback is unlikely to be reversed by a recent thaw in diplomatic relations or the simultaneous occurrence of the winter Olympics in PyeongChang with Chinese New Year (conditions which in other years would probably precipitate a perfect storm in demand).

Long-haul bookings for Africa and the Middle East are 11.9% ahead. Africa’s outbound travel will rise too, buoyed up by general economic recovery in Nigeria and South Africa. Additionally, a long period of bad travel results over Egypt looks set to clear when the country welcomes back Russian tourists in February, when flights are predicted to resume.

Continental Europe should benefit from the EU-China Tourism Year with first-quarter bookings 13.3% ahead. In Russia, the FIFA world Cup will attract a surge in visitors and encourage the domestic population to remain at home. The outlook for the UK is uncertain though, where a rise in the value of £ Sterling is damping enthusiasm for the destination seen last year.

Olivier Jager, CEO, Forward Keys, said: “One has to be optimistic. Despite 2017 being a year filled with economic and political uncertainty, it is one in which long-haul travel has grown strongly and that trend looks set to continue.”