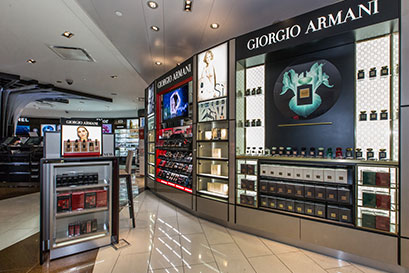 The opening represents a big achievement to be present in one of the highest Chinese traffic stores in the region (#4) with very promising results to become Armani’s #3 store for Travel Retail Americas.

Sam Cullen, Beauty Trading Manager at World Duty Free, Canada, Vancouver International Airport said: “Giorgio Armani cosmetics represents something special for our customers in the world of luxury beauty. Its introduction to our store has driven foot traffic in new ways and increased customer satisfaction as they are excited to find Giorgio Armani cosmetics cult products in our airport!

“It has brought an additional level of makeup service to the store that we believe has enhanced the consumer experience,” he said. 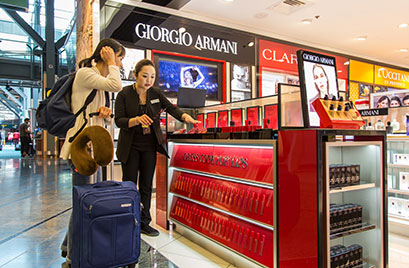 The Armani store in NY’s John F. Kennedy Terminal 4, which is operated by DFS, fully restructured in the main entrance to the store, integrating cosmetics into the existing fragrance and Armani Privé/Haute Couture Fragrances offer.

The remodeling increased the space from 4-sqm to 20-sqm, making Giorgio Armani the first mega brand in the store.

Minutes after opening, consumers were all over the Armani counters and products were flying off the shelves, reports the company.

Toyger Civelek, Beauty Product Sales Manager, JFK International Airport – DFS Group Limited JFK said: “We did notice that our UPT (Unit Per Transaction) has gone up with Giorgio Armani Designer frag-rances when customers buy Giorgio Armani cosmetics. In addition, the Latin American and Middle-Eastern passengers’ interest in Giorgio Armani Cosmetics was better than we thought. With the right assortment, and the new BA starting soon, we do expect to see a lift with sales.”

In an article in TMI last October, Thibault Tétrel, General Manager Travel Retail Americas for Giorgio Armani & Designer Fragrances at L’Oréal (Parbel) reported that the Armani beauty line had opened in 15 key travel retail doors in North and South America during 2016, with another 15 scheduled to join them by the end of 2017.