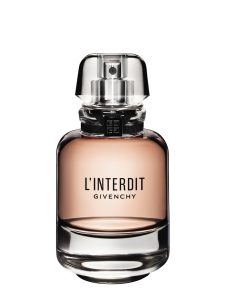 Givenchy began launching a “game-changing” fragrance worldwide on September 15, strengthening the connection between the brand’s couture heritage and its beauty business.

Givenchy’s famed classic perfume, L’Interdit, was originally created in 1957 exclusively for iconic American actress Audrey Hepburn, Hubert de Givenchy’s friend and long-time muse. According to legend, when de Givenchy asked if he could commercialize the fragrance, she initially replied “Je vous l’interdis! “ (“I forbid you!”).

Now, more than 60 years later, the house of Givenchy has created a new version of the classic perfume and is backing it with a major launch throughout the world. In an unhappy coincidence, Hubert de Givenchy died at the age of 91 this past March, and so the perfume is being considered a tribute to his memory.

The rounded bottle design of 2018 is a clear tribute to the original 1957 bottle, with the neck tied with a contrasting matte grosgrain bow and 4G logo. The outer carton in white with black lettering and accents is enhanced with the 4G logo embossed into the front, and opens to show a deep scarlet interior that carries the signature of Monsieur de Givenchy.

The juice is described as a contrast between a blend of a white flower and a dark accord. Created by master perfumers Dominique Ropion, Anne Flipo and Fanny Bal, L’Interdit opens with a floral white bouquet of orange blossom, jasmine and tuberose, followed by earthy dark tones from vetiver and patchouli. 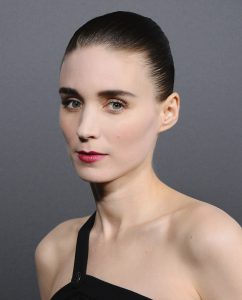 A global campaign is supporting the launch. It stars the very talented Rooney Mara, known for her transformative roles, says the company. Twice nominated for an Oscar, her stand-out film roles include The Girl with the Dragon Tattoo and Carol, for which she won Best Actress at the Cannes Film Festival. As important as her acting talent, Mara is also deeply committed to the protection of the environment and animal and human rights.

The theme of the new fragrance is the “thrill of the forbidden,” says the company. The film defining the campaign was shot by Todd Haynes, who directed Rooney Mara in the film Carol. It takes place at the ghost metro station of Porte des Lilas which is not open to the public. It opens with Mara, dressed in a Givenchy Haute Couture black lace dress, in a chic Parisian apartment. She leaves the apartment and enters the metro, eventually arriving at a closed door, and at dawn emerges serenely from this unknown venue. The advertising visual is by photographer David Sims and was also shot in the Paris metro.

The launch of L’Interdit is a key part of Givenchy Travel Retail Americas strategy to affirm a strong heritage with the couture, and take this strength into cosmetics in the Americas.

“We want to rebuild the strong link between the couture and the cosmetics. L’Interdit will help us converge the link between couture and our beauty brands,” says Edouard Mariotti, Regional Director, Travel Retail Americas at LVMH Fragrance Brands, where he oversees the Givenchy and Kenzo brands.

“Along with L’Interdit, Givency will also support our international fragrance pillars with the continuing success of Live and Gentleman,” he says.

In the next year, Givenchy will focus on the next generation of makeup doors, driven by Asian customers mainly in North America and also build the cosmetics in Latin America where it currently has 3-axis doors featuring makeup, skincare and fragrance, says Mariotti.

In makeup the growth will be driven by Givenchy’s strong authority in lips and the face segment, categories in which the brand is doing exceptionally well in Asia, he says.

In August, Givenchy held a popup at DFS in Los Angeles Tom Bradley International Terminal, where it showcased Le Rouge Liquide, its newest launch in lips. After running throughout the month of August in LAX, the pop-up moves next to DFS’s downtown Galleria in Hawaii, where it will run for two months beginning on Oct. 1. Whereas the LAX activation was 100% focused lips, the Hawaii installation will also feature the new L’Interdit fragrance, and an even stronger retail-tainment component in slightly larger space.

In luxury skincare, Givenchy’s strategy in travel retail is to maintain the current doors and to bring in Givenchy Le Soin Noir, its very premium haute couture skincare range, with dedicated and personalized service for top doors, says Mariotti.

“We will be aligning more with the classic DNA of the Givenchy brand, connecting beauty with couture,” he said.