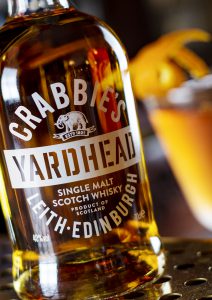 Crabbie, both a brand steeped in history and a new brand known for its innovation, introduced Crabbie’s Yardhead at a launch event in London last week.

Established in 1801, John Crabbie & Co. of Leith, Edinburgh blended distilled, stored and exported whisky all over the world until the early 20th century.

In 2017, under a new management team, Crabbie reemerged and launched a range of limited edition single malts from the Highlands and Islands of Scotland.

The current Crabbie range includes the lightly peated 12-year old from the Scottish Islands and the Crabbie 8 y/o, 25 y/o and 40 y/o Highland Single Malts from Speyside.

“Crabbie’s Yardhead breaks the mold for single malts. It is unpretentious and laid back, a profile which is designed to appeal to the next generation of consumers and to those who may enjoy brown spirits already but have not yet found their way to whisky,” says Roffe.

“We are delighted that we will be able to unveil both Yardhead and Crabbie’s 12-year old single malt on the Halewood stand in Green Village and on our yacht in Harbour Village at TFWA World Exhibition in October. The Crabbie whisky range will be a perfect addition to our growing portfolio of craft spirits such as Whitley Neill Gin and Dead Man’s Fingers rums which are already making waves in the travel retail channel.”

Crabbie’s 12-year old Single Malt Island Whisky is a lightly peated spirit which has been matured in refilled sherry casks and bottled at 43%. It will retail in duty free & travel retail at around 38 euros per 70cl bottle.

In May 2018 John Crabbie & Co opened its own distillery, the first new single malt distillery in Edinburgh for 100 years, at the Chain Pier. A new larger home is under construction nearby in Leith and production will start later this year.