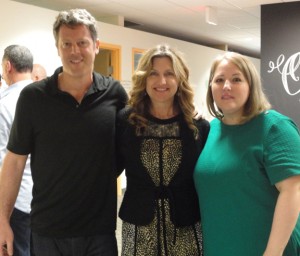 Staff from Starboard Cruise services, Onboard Media and other Miami organizations recently had the opportunity to meet Erin Morales, who joined Hand in Hand for Haiti as the organization’s first Executive Director in November 2015. In this role, she is responsible for U.S. operations and global resource development for the Lycée Jean-Bapiste Pointe du Sable, a school of excellence built for under-privileged children in Saint-Marc, Haiti following the devastating earthquake that pummeled Haiti in 2010.

The school will be celebrating its fifth anniversary this year. It was built 100% of donated funds, much of it coming from the duty free industry

Morales has more than 15 years of non-profit management experience with a special focus on children’s issues and education. She has held senior management positions with the American Cancer Society, Smithsonian Institution, Trinity School, Liberty Science Center and Advocates for Children of NJ.  She lives in New Jersey with her husband and two children. 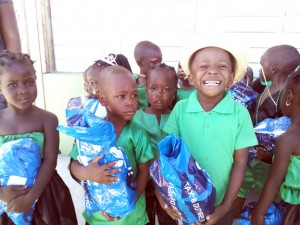 Students at the Lycée were so excited to receive special packages to take home during Carnival at the beginning of February. Photo by Erin Morales.

Erin met with the two groups — both divisions of LVMH — at the Onboard Media offices on February 18 to report on her visit to the school and update them on recent developments. Starboard and Onboard are responsible for raising approximately half a million dollars a year for the school through a variety of projects and activities.

Also onhand were members of the Hand in Hand for Haiti Advisory Board, Robin Rosenbaum-Andras, Senior Vice President, Marketing Starboard Cruise Services, and Jeff Feldman, Vice President at Uribe Construction, who is an active member of several organizations that work with Haiti.