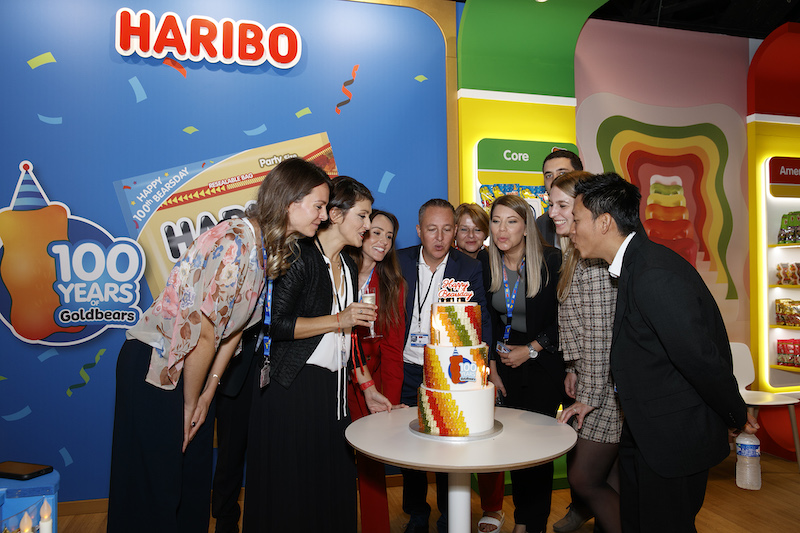 The Haribo travel retail team joined with retail partners to celebrate the 100th birthday of Haribo Goldbears during the TFWA World Exhibition in Cannes.

The iconic Goldbears are the best-selling product in sugar confectionery in many regions in travel retail and in several domestic markets, according to research commissioned by Haribo. Since Hans Riegel began hand-crafting the colorful gummy dancing bears in his home in 1922, the company’s mission – to give people a moment of happiness with a small affordable luxury – has remained a constant objective of the company throughout the last 100 years, says the company.

Since its foundation on December 13, 1920, Haribo has been in uninterrupted family ownership by the Riegel family and economically independent of third parties. Haribo is today one of the best-known German consumer brands.

Made from a closely guarded recipe, the cheerful bright colors and fruity flavors have been at the heart of the fruit gummy bears since the first generation. With the invention of gummy dancing bears, Hans Riegel pioneered a new global market.

In the 1960s, Dr. Hans Riegel and Paul Riegel joined their father in managing the company, and the dancing bears became smaller and rounder Goldbears. Its packaging design, first created in 1961, is instantly recognizable on confectionery shelves around the world. Another subtle but significant change to the character of the bears came in 1999 when designer Petra Wrede gave the bears a smile, said to reflect Hans Riegel’s aim to give people a moment of happiness.

Now under the leadership of Hans Guido Riegel, the third generation of the family to run the business, Haribo Goldbears are available across the world with 160 million Haribo Goldbears produced every day.

Consumer recognition of the iconic GoldBear also reaches around the world with, on average, one in four people globally being able to instantly identify them as Haribo Goldbears and, in leading markets such as Germany, Austria, Denmark and France, the awareness is almost 100%, according to the Yearly Haribo Global Brand Tracking study.

Since 2016, Haribo has also been manufacturing in Brazil, where it operates its first production facility outside Europe.

The German global brand is also growing rapidly in North America. Haribo has been the #1 fruit gummy brand there since 2018.

In order to better meet the high demand in the USA, Haribo is currently building a plant in Wisconsin, which is scheduled for completion in the near future.