The 2015 ASUTIL Conference, which took place in Panama City, Panama last week, kicked off with the traditional regional update from ASUTIL Secretary General José Luis Donagaray. Describing 2015 as a very challenging year for LatAm, Donagaray reported that retail sales in the first quarter of 2015 were down by -6% across its 15 member operators in 12 countries in South and Central America and the Caribbean (YOY).

Reflecting the weakness, the average ticket was down by -4%, he said. 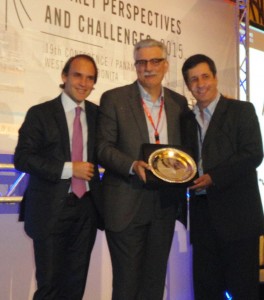 The sales drop comes despite a 6.2% rise in passenger traffic demand YTD, according to the latest IATA figures, released for April.

By product category, perfume sales in US dollars were down by -8%, alcohol sales were down by -1%, tobacco fell by -6%, confectionery (and other foods) were down by -5%, electronics plunged by -18%, and “various” was down -15% (including fashion, leisure, sports items and gifts).

ASUTIL President Enrique Urioste noted that the “rules of engagement were changing,” although he now thinks that the worst of the crisis could be behind the region.

“The drop was less than what the market expected,” he said, reminding the audience that the travel retail industry is one of the first to feel the effects of any crisis.

“But our business fundamentals are sound and investments continue,” he concluded.

In a break from tradition, the ASUTIL executives announced the dates and location of next year’s event, which will take place at the Sheraton in Santiago, Chile on June 8-10, 2016. The next border meeting will be held on Nov. 16-17, 2015, in Puerto Iguazu.

As always, the final highlight of the conference is the presentation of the association’s annual lifetime achievement award. Jean-Jacques Bona, President of Essence Corp and a pioneer of perfume and cosmetics in the region (who incidentally began his Americas career in Panama) was this year’s recipient, a well-deserved accolade.

Nearly 350 people registered for the 2015 ASUTIL conference, up more than 5% from last year’s attendance.