In a special analysis for TMI John Gallagher looks at how the program has developed over the years and assess how it has affected the travel retail business.

Infrastructure development has been a perennial problem in Brazil. As international commodity and raw material prices boomed during the first decade of this century, the Brazilian economy grew at a rapid pace; solid GDP growth and economic expansion led to increasing numbers joining the middle classes and leisure and business travel, both domestic and international, grew ahead of government estimates.  As expansion continued it became clear that the transport infrastructure was finding it difficult to cope with the increasing numbers of people using planes, trains and buses.

In spite of the economic bonanza, Brazilian airports had not changed very much since the eighties and the country’s leading international gateways were viewed by airport users as being overcrowded and outdated. Double-digit passenger growth was good news for the airlines but it was creating problems for the administrators of airports looking at how to cope with increasing passenger numbers.

The Federal Government realized that urgent action was needed to increase passenger capacity as the country was picked to host the FIFA Soccer World Cup in 2014 and the Summer Olympic Games in 2016. The government realized it was unable to do this on its own and the process to privatize commercial airports in Brazil finally started in 2011.

Until that time 97% of the country’s commercial airports had been controlled by Infraero, Empresa Brasileira de Infraestrutura Aeroportuária. The state controlled company managed 63 airports and looked after 180m passengers, as the privatization process got under way. Like many government owned companies in Brazil, Infraero was regarded as fairly well managed but not commercially efficient. Many of the leading executives had come into the organization from the Armed Forces and whilst airfield operations were regarded as efficient and well thought out, the airport terminals were a commercial disaster. Duty free operations were seen as solid but many retail opportunities had not been fully taken advantage of due excessive bureaucracy at Infraero. Retailers and food and beverage operators often met with a negative response when they looked to expand and offer more exciting stores and restaurants for travelers.

In order to accelerate much needed renovation works, the Brazilian government decided that private companies would be granted a concession to manage and overhaul the leading airports controlled by Infraero in exchange for carrying out and financing the construction and engineering investment.

The concession program had been talked about since the turn of the century and the opportunities had attracted the attention of international airport managers, infrastructure companies and Brazilian construction conglomerates. However many investors lost interest as the Civil Aviation Authority delayed issuing concrete proposals and failed to confirm exactly what airports would be concessioned. However, potential stakeholders became a little uneasy when nothing concrete happened in the early part of 2011

However in June, the Civil Aviation Authority (ANAC) finally launched the program with a “trial run”, looking for proposals to develop a new greenfield airport in Natal, in Rio Grande do Norte, a project estimated to cost $575 million. In contrast with the months running up to the tender announcement, the actual tender process was a rapid one,

ANAC declared that bids would have to be lodged by mid-July, with the winner being decided on the size of concession fee offered. The winning Infra-America consortium, a 50/50 joint venture of the Eurnekian-controlled Argentine conglomerate, Corporacion America, and Brazilian engineering firm Engevix, beat off three rivals with a $106m bid which gave them the right to build and operate the airport for 25 years. (Engevix later sold its shareholding in Inframerica to Corporacion Americas as it was caught up in the country’s corruption scandals.)

Sao Paulo and Brasilia up for grabs

After the relative success of the Natal experiment, ANAC drew up the tender documents for three additional airports to be privatized in early 2012, Guarulhos and Viracopos-Campinas in Sao Paolo and Brasilia were earmarked for private operation. With the economy still growing, ANAC took the decision to privatize a 51% stake in each of the airports with Infraero maintaining a 49% shareholding. At the same time the government advised that no investor could win a stake in more than one airport, much to the dismay of some of the bigger players.

If the success of privatizations is measured by how much money is collected to reduce government debt or to invest in infrastructure, the sale of these three Brazilian airports must rank as one of the most successful in history.

Inframerica Aeroportos, the group that won the Natal International concession the previous year- won the 30-year concession bid to manage and renovate Brasilia International Airport. Inframerica bid R$4.51b. In addition, the Civil Aviation fund was to receive 2% of the airports gross revenues each year.

The 25-year Viracopos – Campinas concession was won by the Aeroportos do Brasil consortium, made up by Brazilian infrastructure specialists Triunfo Participações and UTC Participações and French airport operator Egis Avia. The Franco-Brazilian consortium offered R$3.82b and an annual payment of 5% of gross revenues to the Civil Aviation Fund.

Many industry observers felt that the winners overpaid to take the concessions and the slowdown in the Brazilian economy has had a negative effect on all three airport operations. Renovations at Guarulhos and Brasilia were completed on time and airport users have enjoyed an enhanced travelling experience. The commercial offer in both airports has been vastly improved with a wider selections of bars and restaurants landside and airside. The retail offer has also been improved as the anchor duty free and duty paid retailer Dufry successfully renegotiated and extended its contracts with the new landlords. The company’s 4,400sqm store at Guarulhos T3 international arrivals and the 2,000sqm duty paid store in Brasilia domestic departures are rated by most observers as the most significant developments. The story at Viracopos is not as exciting as the new operators have struggled to meet the renovation targets agreed with ANAC and have had to renegotiate royalty payments. Fewer international flights have also prevented Dufry from fully developing the retail offer which they inherited when the company bought Nuance. 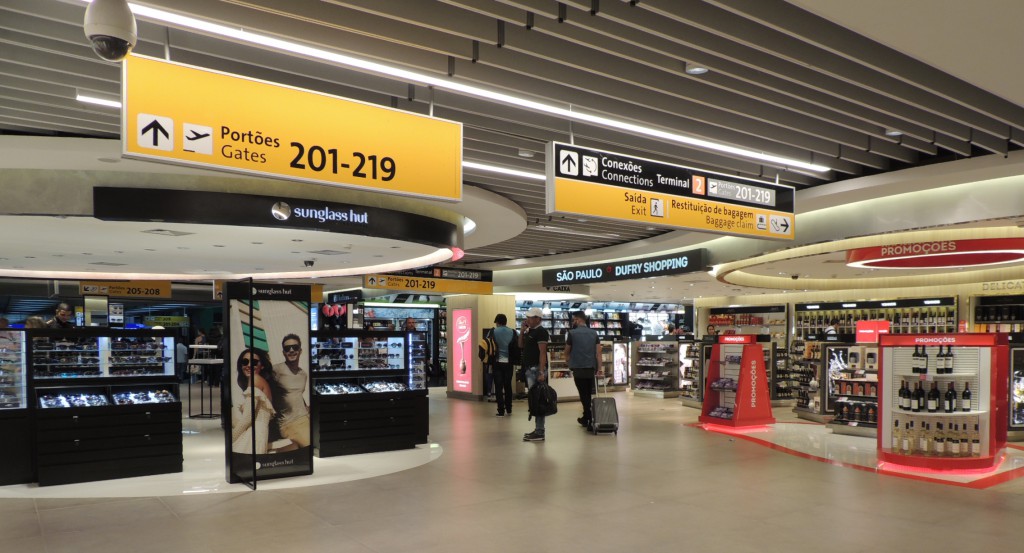 Rio and Belo Horizonte next in line

The next round of privatizations was not held until November 2013. ANAC again looked to change the rules but eventually a similar format was used as the previous round of concessions.

The big prize of the right to operate Rio de Janeiro’s Galeão airport went to Brazilian construction specialist Odebrecht in a joint venture with Singapore Airport manager Changi. Again the specter of overpayment surfaced with observers commenting that the upfront fee of R$19B along with R$5.7b with of investments over the next 25 years. Only last month , Chinese conglomerate HNA bought Odebrecht’s shareholding in the airport operating company , allowing the company to start negotiations with ANAC to draw up a schedule to pay outstanding royalty payments . In spite of the cash flow problems, the management team at Rio Galeão has continued with investment to improve the commercial offer. Anchor duty free retailer Dufry has increased the total surface of the stores they operate from 4,000sqm to 8,000sqm, including a 3,700sqm arrivals store. Following an extension of their retail concession until 2032, signed last year, further store openings are anticipated.

Belo Horizonte went to CCR, Brazil’s biggest highway concession operator in association with Swiss airport manager Flughafen Zuerich with an R$ 1.82b bid. A new terminal and runway will require further investment of R$3.5b. Belo Horizonte is Brazil’s 5th biggest airport and the new managers are immersed in their investment program which has included a 3,000sqm sense of place food , beverage and retail area in Terminal 1 featuring bars, restaurants and retail stores with the best produce and goods reflecting the heritage of the Minas Gerais province.

Clean sweep for Europe in third round

In March this year European based airport managers Fraport, Vinci and Flughafen Zuerich won the concessions to operate four airports in the most recent round of privatization.

This round was the first under the patronage of President Michel Temer and deadlines were stretched to ensure the success of the project. Brazilian infrastructure companies were noticeably absent from this round of bidding. Nevertheless, the government raised a total of R$ 1.46b, which represents a 94% premium over the minimum price that had been established. During the life of the concessions the government will receive a further R $ 3.72b in fees.

German airport manager Fraport AG, a 70% shareholder in Lima Airport Partners, bid R$ 290,5m to win the rights to operate Porto Alegre Airport, in southern Brazil. Fraport also bid R$ 425 m to win the contract at Fortaleza Airport. Fraport was one of the most notable losers in the last privatization round where it unsuccessfully bid on the Rio – Galeão concession.

With a bid of R$ 660, 9 m, French airport specialist Vinci took the top prize at Salvador de Bahia Airport.  Vinci are the managers of Chile’s Santiago Airport. Swiss based Zurich Airport AG won the rights to manage Florianopolis airport, the smallest airport of the 4, with a bid of R $83.3 million.

All the concessions are for a period of 30 years, except Porto Alegre which is 25 years; all winners have the right to ask for a five year contract extension. Unlike the previous rounds Infraero, the Brazilian state-owned airport authority, will not partner with the companies that won the bids.

It’s safe to conclude that privatization has worked in the extent that airports have been renovated in a timely fashion. But some concession holders have been unable to pay the agreed royalty payments to ANAC as the economic slowdown has had a negative effect on traffic figures and growth forecasts were shown to be totally unreal. Accusations of overpayment especially in the first two tranches would seem to have been at least partially correct. The Brazilian government at least is showing a benevolent hand by helping companies refinance payments. However it remains to be seen if concessions will be revoked if late payments continue.

What will the future hold?

Solid economic recovery is unlikely before the second half of 2018 and this may not be reflected in passenger traffic figures until 2019.

Infraero now administers the less important airports in the Brazilian network but it remains as a minority shareholder in the big 4 airports; clearly the government has to assess what its future role will be. The airports are visibly more attractive places for travelers but speculation that Infraero will sell its shareholdings will remain if the economy situation remains unsteady and the government requires to raise finance to cover budget shortfalls.