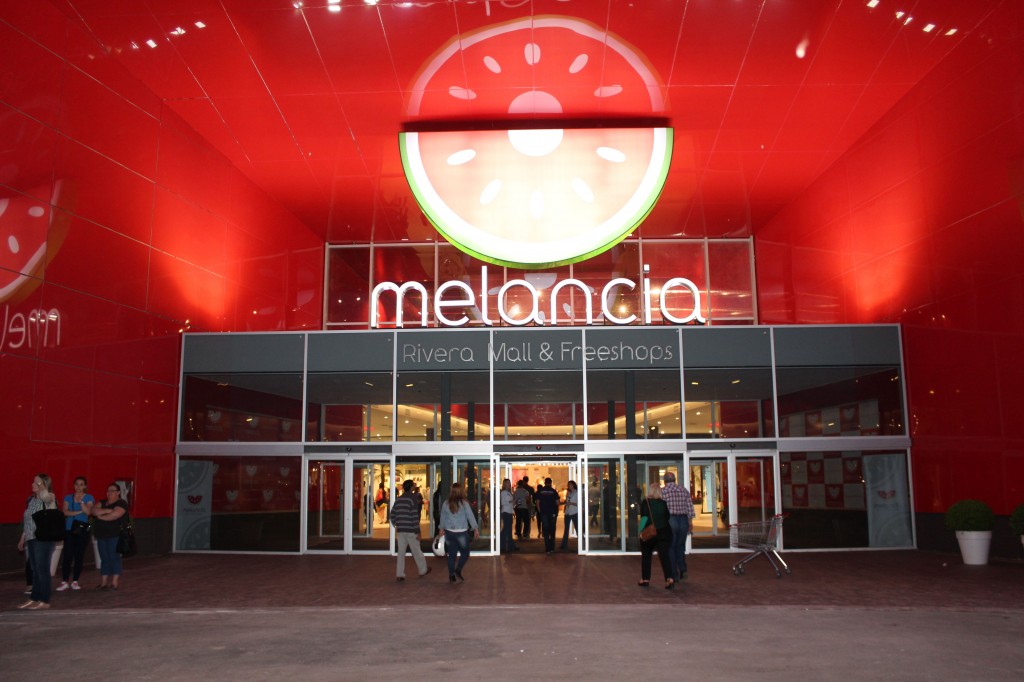 On Thursday, November 5 of this year, the US$70 million Melancia Mall, the largest shopping complex in Northern Uruguay, opened its doors on the outskirts of the border town of Rivera.

Originally scheduled to open in the first quarter of 2014, poor weather –including heavy spring rains that caused significant flooding on the site — held up construction for more than a year. The precarious economic situation now in Brazil and Argentina presented additional challenges to the project, which is offering Brazilian and Argentine consumers a new and innovative shopping experience compared to the typical border stores in the region.

Developer Grupo Marchesano invested US$42 million to develop the beautiful 33,000 sqm shopping complex and another US$28 million was invested by retailers and food court operators to fit out their stores and restaurants.

Melancia is anchored by two major 4,000 sqm duty free flagship stores — one operated by long established border store operator Neutral and the other, located at the opposite end of the Mall, run by Panama-based Grupo Wisa under its La Riviera fascia. Grupo Wisa also operates a smaller 200 sqm express store under its Colonial fascia. The Colonial store features a selection of leading brands in key categories. Both the Neutral and Grupo Wisa operations opened on November 5.

The two duty free stores are very different in layout and style, offering the Brazilian and Argentine clientele contrasting shopping environments, brands and options. Melancia Mall has been designed as a destination in itself, and shoppers will need hours to get around both stores.

According to Uruguayan law, only non-Uruguayan citizens may shop at the duty free stores on the borders with Brazil. But the Mall will also house about 60 duty-paid stores plus an extensive food court that can be used by local residents of Rivera and the surrounding area.

But with fewer shoppers from Brazil today, the management of Melancia Mall is doing whatever it can to increase traffic to the stores. It has been making extensive use of social media to attract both Uruguayan and Brazilian shoppers, and also heavily featuring entertainment—with programs that mix Brazilian and Uruguayan performers — to bring visitors and residents into the shopping center.

Developer Marchesano is also working to make the Mall an immigration and transportation center. The Uruguayan Immigration office for Rivera is being relocated to the Mall from its current location in the center of town, which is sure to drive future shopping traffic, since all Argentine drivers taking road trips to the beaches in Brazil will be required to stop here.

Later next year, Rivera’s Bus Terminal will also be relocated from the town center to a newly built location adjacent to the Mall — another positive development geared to generate traffic for the shops.

Despite the challenges facing the project today, Melancia appears to be positioned well to reap the benefits of the recovering up-cycle. TMI’s John Gallagher met with the Neutral and Grupo Wisa management to discuss initial response to the ground-breaking shopping project, and his report is presented here.

“The opening of the Melancia Mall will inevitably be a great boost for the city of Rivera and a great part of northern Uruguay. From my position as spokesman for the Chamber, I am particularly pleased to see the major investment from two of our member companies, Neutral and Grupo Wisa, which clearly shows a great long term commitment to Uruguay and the border duty free business,” commented Loaiza.

“Obviously we are at the low point of the economic cycle and the economic uncertainty in Brazil does not allow us to forecast when things will begin to improve.

“What is clear is that with the sort of investment we have seen at Melancia by two specialist companies in the duty free business, they will beat the worst part of the cycle and both companies are well positioned to grow the business when the cycle begins to improve,” he continued.

Loaiza was cautious regarding the immediate future.

“The current situation in Brazil is hard to predict; the well-documented economic problems have been joined by even bigger political problems. However, we should all realize that one of the positive things to come out of the crisis is that Brazil is showing a tremendous institutional vitality (the judicial and political processes are being carried out, people have been detained and there have been guilty verdicts when the corruption cases have been proven). This vitality allows me to be optimistic and believe that these apparently serious problems can be solved in the future,” he noted.