Hudson Group has announced that Chief Executive Officer Roger Fordyce will be stepping down as of June 30, 2021, after more than 30 years of distinguished service with the company, the last three as CEO. He will continue to support Hudson in an advisory capacity moving forward. 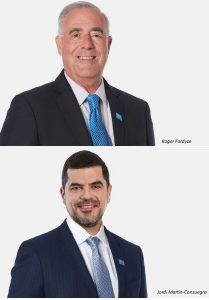 With more than three decades of travel retail leadership, Fordyce helped transform Hudson into a leading North American travel retailer and successfully navigated the company through one of the most unprecedented events in the industry’s history.

Dufry Group CEO Julián Díaz, commented: “Roger has been an instrumental part of the business for many years, and in the name of the Dufry Board of Directors and the management team, I would like to thank Roger for his long-standing leadership and his commitment to delivering strong short-term and long-term performance results across the company.

“For more than 30 years, Roger has acted with precision, helping to drive the evolution of travel retail in North America in alignment with the Dufry business model while serving as an example of operational excellence and industry prowess. We look forward to continuing to benefit from Roger’s valuable support in his advisory role.”

Fordyce will be succeeded by Jordi Martin-Consuegra, Executive Vice President, Chief Administrative Officer, and Deputy Chief Executive Officer. Backed by a 15-year tenure with both Hudson and Dufry, Martin-Consuegra has been instrumental in the transformation of Hudson’s business across people and culture, organization, technology, and digital innovation, says the company.

During his tenure with Dufry, he served as Chief Resources Officer, Group Organization and Human Resources Director, Group Integration Director, and Group Information Technology Director. Martin-Consuegra was directly involved in leading the successful business integrations of several newly acquired companies for Dufry, including the acquisition of Hudson in 2008, in close partnership with Roger Fordyce and the entire Hudson management team.

Upon Martin-Consuegra’s appointment as Hudson Chief Executive Officer on July 1, 2021, Brian Quinn will assume the role of Deputy Chief Executive Officer. Quinn, who has been with Hudson for over 30 years, currently serves as Executive Vice President and Chief Operating Officer, and is responsible for the operational performance of Hudson’s stores across North America.

Partnering closely with Fordyce and Martin-Consuegra, Quinn has continuously acted with business and operational acumen, enabling Hudson to streamline its business over the years, and deliver cutting-edge store concepts for travelers and landlords alike.