As the craft gin boom takes the spirits world by storm, Whitley Neil gin’s success in its home UK market has quickly spread to the global travel retail market.

“We are the fastest growing premium gin on the planet,” Simon Roffe, Managing Director Global Travel Retail, Halewood Wines & Spirits, tells TMI. “We have secured, in less than three full years in the market, business with over 80% of the Top 25 operators in duty free and I expect Whitley Neill to improve on its #6 premium gin ranking in the summer when IWSR is updated.”

Brand owner Halewood Wines & Spirits, which is the largest independent alcoholic drinks manufacturer in the UK, has focused on Whitley Neill Dry Gin and its flavored variants in global travel retail over the past few years. Both North America travel retail and domestic markets are priorities going forward, says Roffe.

“Whitley Neill Gin is already listed in key U.S. gateway airport locations, including New York JFK and Washington with Los Angeles and San Francisco due to come online soon, and the response from travelers has been fantastic. We have committed to additional promotions and activations with our existing U.S. operators to drive the in-store visibility of the brand,” he says.

“Part of the evolution of the Americas domestic business is organization, our route to market. We are established with Whitley Neil with five chains in the northeast and five in Florida. The core focus of our investment in domestic U.S. is New York, Florida, California, and maybe Texas. If you can crack those hubs then you can translate the story into other areas.”

In Canada, Whitley Neil’s duty free business has been growing on the northern side of the border thanks to its North American agent Haleybrooke International, says Roffe.

“The Canadian border business is fantastic. This is the fourth year I’ve been coming to the FDFA show. We won an award last year as the best liquor product in Canadian borders. This is paramount to the relationships that Haleybrooke International’s Roger Thompson has in Canada.” 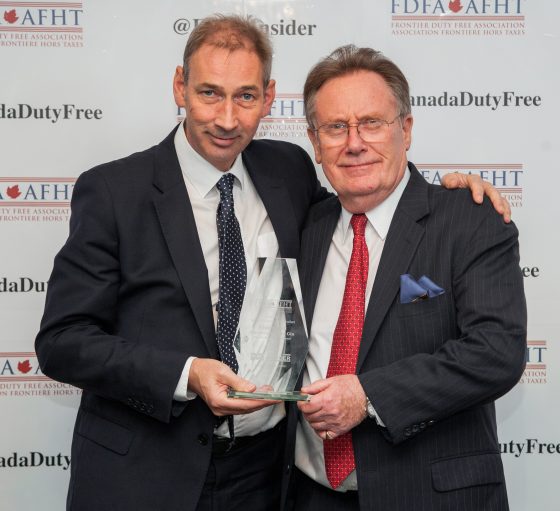 Halewood has invested heavily in its organization to support its growth in international markets, says Roffe.

Whitley Neil has grown from selling 3,000 9 liter cases five years ago to more than half a million 9 liter cases globally in the last two years, says Roffe.

“The split between the UK business and the international markets has changed from 99% UK to probably near 80-20. Travel retail is about 10% of the brand. We’ve had a massive expansion in terms of distribution,” he says.

Demand for the gin continues to grow.

“We are the number one gin with Dufry in the UK. We are in all of the 65 Dufry stores in the UK, every airport. And they cannot get enough of it.”

While Whitley Neill has led the way for Halewood in travel retail, a key part of the company’s strategy going forward is to diversify its duty free business beyond Whitley Neil into whisky and rum, says Roffe.

“We are following the success of this brand in the Americas with a powerful marketing drive in support of some of our other premium spirits such as Crabbie’s Yardhead Scotch, Dead Man’s Fingers rums and Peaky Blinders whiskey. All of these lend themselves to colorful themed activations so you can expect some excitement with those brands in the next year. The brands are being rolled out simultaneously in the domestic markets in North and Central America and we hope the success of one will fuel the drive of the other.”