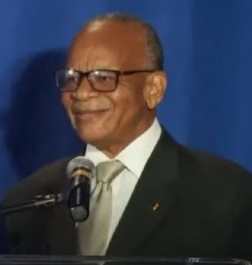 Condolences and accolades are pouring in to the Caribbean from around the world on the death of Dr. Jean Holder on Jan. 26.

Dr. Holder, 85, a Barbadian by birth, is considered by many to be the father of regional tourism development in the region. A distinguished diplomat, he was the first secretary general of the Caribbean Tourism Organization – which he led for three decades – as well as a former chairman of regional airline LIAT.

In joining the rest of the Caribbean in mourning, the CTO said in a statement:

“The late Dr. Holder spent more than 30 years of his professional life leading the development and expansion of the sector that would become the region’s main foreign exchange earner and the engine of economic growth.

“The Caribbean, and we may argue the greater world of tourism, truly has lost one of its pioneering sons. Dr. Holder’s progressive leadership during the formative years of Caribbean tourism distinguished him as a pillar of the region’s tourism development. As a dedicated regionalist, he oversaw tourism’s growth from infancy to its current various stages of maturity. Indeed, elements of the original Caribbean tourism ethos forged by the organizations which he led can be found in virtually every Caribbean nation, virtually every community and anywhere in the region where the tourism seed has been sown.”

The organization concluded: “The CTO council of ministers and commissioners of tourism, its board of directors, allied members, and staff share the region’s grief and feel the sense of loss at Dr. Holder’s passing. He will be missed, but the mark he has made on this region will be long remembered.”

At the end of Dr. Holder’s tenure, the Caribbean Tourism Association had become the region’s major marketing tourism and development organization, with a membership of 34 Caribbean states, as well as several national, regional and international private sector travel and tourism agencies and companies.

The Caribbean Hotel and Tourism Association (CHTA) saluted Jean Holder for his pioneering work in establishing tourism as the major economic driver for the region.

Nicola Madden-Greig, President of CHTA recalled Holder’s leadership and diplomatic skills were brought to bear as Secretary General of the Caribbean Tourism Organization (CTO), where he worked closely with governments to ensure tourism was accorded priority in the development plans of the Caribbean countries and territories.

Frank Comito, veteran Caribbean tourism executive and former CEO and Director General of CHTA, lauded Holder for success-fully using his diplomatic and political skills to underscore to leaders the critical importance of ensuring tourism was not only developed as the leading generator of wealth for the region, but also that it was developed sustainably to ensure the people of the region and their environments could benefit.

“Jean Holder… left an indelible mark on the Caribbean and tourism, and today we all bene-fit from his stewardship,” said Comito.

TMI adds our deepest condolences to those of the industry on the passing of this true visionary and pioneer.