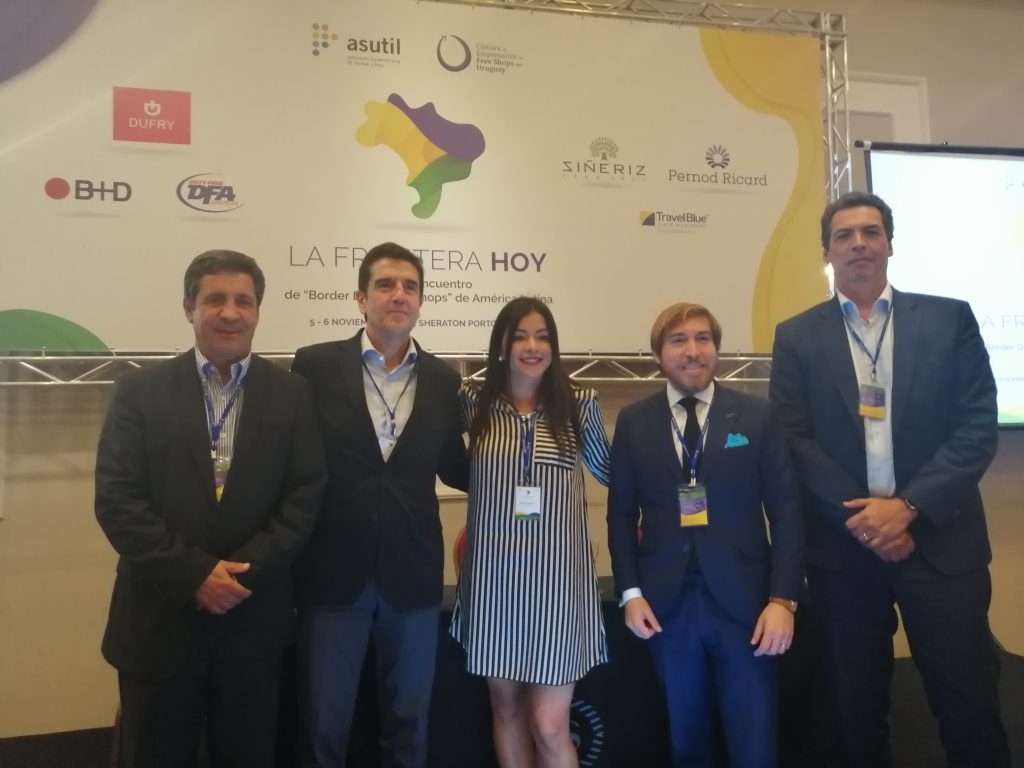 ASUTIL Secretary General Jose Luis Donagaray explained that the organizers held the conference before the end of the year due to the numerous requests for information they had received, and chose the location of Porto Alegre because the major political force behind the new law authorizing duty free stores on the Brazilian side of the border emanated from that city. 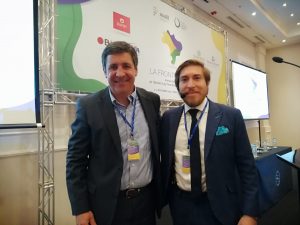 CEFSU Secretary General Carlos Loaiza noted that the information in the presentations and networking sessions were designed to assist suppliers and operators make informed decisions for their business plans on the border. He also promised delegates that CEFSU would continue to lobby for regulations to assure that the border store operators in all Mercosur countries could compete on a level playing field. Loaiza hopes that the Brazilian border business grows to be as important as the Uruguayan business, where in some towns it accounts for more than 30% of employment opportunities for the population.

Speaker Luiz Fernando Lorenzi, the regional head for the Receita Federal in Rio Grande do Sul province, confirmed that his organization had authorized the opening of seven stores from 8 applications, with the one remaining application still being reviewed.

According to official Customs data more than US$600,000 had been invoiced by the stores that had opened up until the end of October and he expected this figure to rise substantially over the next few months.

Argentine economist Carlos Melconian, discussing world and regional economies, noted that the short-term development of the world economy would depend on how the trade war between USA and China progresses. Together, both countries account for more than 40% of the total world GDP and if the tit for tat trade sanctions continue, a recession may be inevitable, he said.

Regarding Brazil, Melconian asked why Brazil has not been able to grow its GDP when the basic macro economy factors were showing favorable signs with low inflation, relatively low debt and a steady and competitive exchange rate? He argues that more economic and fiscal reforms may be necessary in addition to the recent pension reforms.

Argentina was a much more complicated case, according to Melconian. High inflation and an extremely volatile exchange rate combined with the need to negotiate a new deal with the International Monetary Fund would surely test the political abilities of the President-elect Alberto Fernandez, who is due to take office in December.

Maria Villanueva of m1nd-set discussed the latest research results on the behavior of Latin American consumers at duty free border stores. Villanueva reports that the conversion factor at border stores was consistently higher than at airport stores given that shop visitors made a conscious effort of shopping for themselves or for gifts and many shoppers consistently pre-planned their shopping activities. Shoppers tended to spend more and were generally more satisfied with the whole shopping experience. According to m1nd-set, the outlook looks positive and further investments from operators in bigger and brighter stores seem to be the way ahead.

The morning session closed with an update from the five industry players who have opened stores over the past few months, with presentations from Dufry do Brasil, Free Shop Caraballat, New York Free Shop, Central Free Shop and Duty Free Americas. 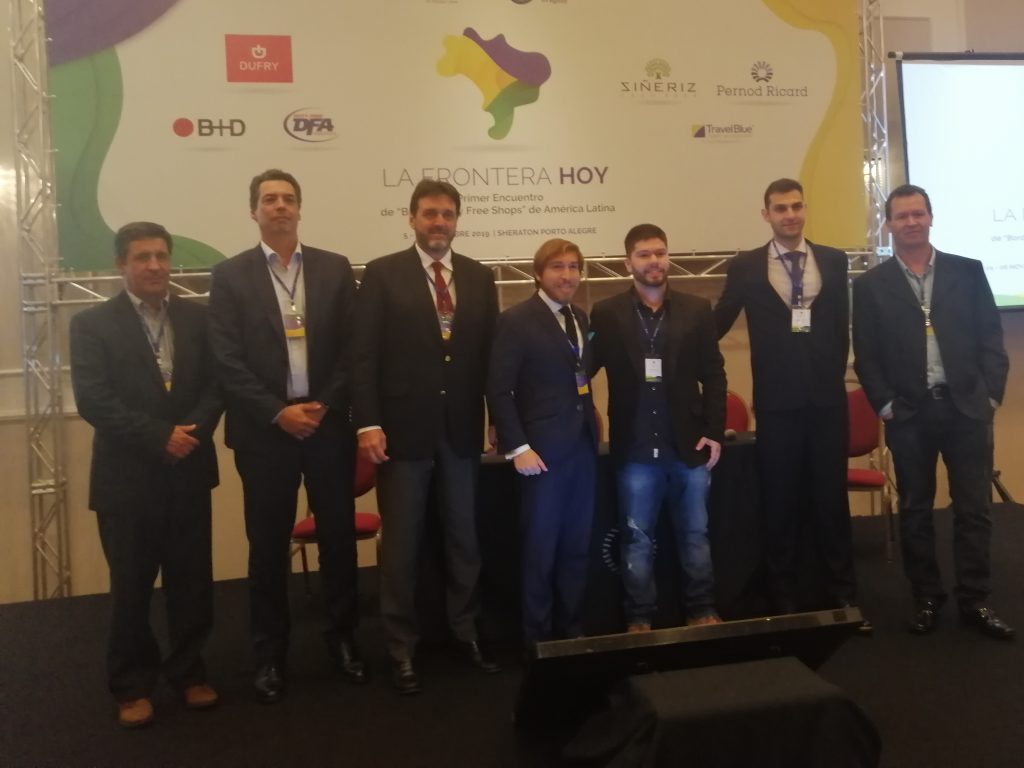 Day two opened with networking sessions linking up established retailers and new store operators with suppliers in the morning, followed by the conference after the morning coffee break. Jose Luis Donagaray told TMI that they felt that it made sense for retailers and suppliers to get together again quickly after their meetings the first day and also ensured a big turnout for the conference sessions which would provide useful information for those who had little experience of doing business in Brazil.

Operators and suppliers agreed that the networking sessions was one of the most important features in the conference.

Local politician Frederico Antunes kicked off the Day Two presentations. Antunes is generally credited as the politician who pushed to get the duty free border law enacted in the Brazilian parliament, and ensure that provinces and cities passed the accompanying legislation to allow shops to open on a local level.

He also confirmed that within the next few weeks and almost certainly before the end of the year, seven additional stores would open – DFA in Uruguaiana; Free Shop Maua in Porto Maua and Brasil Free Shop in Quarai. In Foz do Iguacu, he expected that DFA and Sky Duty Free would open shortly along with Top Internacional in Guajira – Mirim and an independently owned store in Bonfim.

He also expects President Bolsonaro will follow through with his twitter announcement and increase the border duty free allowance from $300 to $500 (Note: this is now confirmed, see sidebar on page 1).

Antunes concluded by saying that frontiers and borders should never divide people but bring them together. “The terrestrial border duty free project will bring Brazilian residents closer to their neighbors who lived only a few kilometers away but, in another country,” he emphasized.

Diego Licio, President of the CZFU, the Uruguayan Chamber of Free Zones, discussed the benefits of the Free Zone system in Uruguay.

“Brazilian retailers will be able to benefit tremendously from the Uruguayan Free Zone logistics system,” explained Licio. “Already several companies are offering logistics services from Uruguayan Free Zones to border stores in Brazil and we expect this segment to grow in the short and medium term.”

Oscar Bentancur, founder of foreign trade consultants Via Balcão, shared his knowledge of how to conduct business with Brazil, explaining the history of cross border trade between Brazil and neighboring countries. He urged suppliers to ensure that invoices and other commercial documents were totally accurate. He warned that even though goods were exported to Brazilian duty free shops, invoices and packing lists had to be exact; and pallets and other packing materials had to conform to normal Brazilian legislation. Mistakes would lead to fines for the importing company.

Bentancur also pointed out that Brazilian duty free shops are not totally duty free – operators are exempt from paying import duties but there are certain state and provincial taxes which still must be paid. In some categories, these can be as much as 15% of the invoice value. Although some of these taxes may be revised and their application simplified, Bentancur said they will not disappear.

The conference closed with summations from Jose Luis Donagaray and Carlos Loaiza, with Donagaray commenting that the organizers hope to make this an annual event. “We are already looking for a location for the next event and find a date that suits all parties,” he said.

Enrique Urioste, president of CEFSU and ASUTIL President Gustavo Fagundes, thanked the delegates for attending and promised that future events would take into account recommendations and suggestions from attendees.

Urioste closed saying that he could still recall his first meeting with Deputy Frederico Antunes when Antunes was starting the long road to get the legislation in place to allow the new business segment to be established. He congratulated Antunes on his tenacity and stated that he fully believed that the new Brazilian border business would benefit everyone involved in the Latin American duty free trade.