The stronger U.S. dollar is having an impact on tourism spending both within the United States and internationally, according to the latest figures released by the U.S. Department of Commerce’s National Travel & Tourism Office (NTTO).

The more expensive dollar resulted in international visitors spending nearly $265 million less in the month of October this year, compared to October 2014. The USDOC reports that international visitors spent an estimated $18.2 billion on travel to, and tourism-related activities within, the United States during the month of October. This marks the seventh month this year in which monthly travel and tourism-related exports were lower than the previous year.

In 2014 international visitors spent $220.8 billion (revised) experiencing the United States, up 3% compared to the previous year. 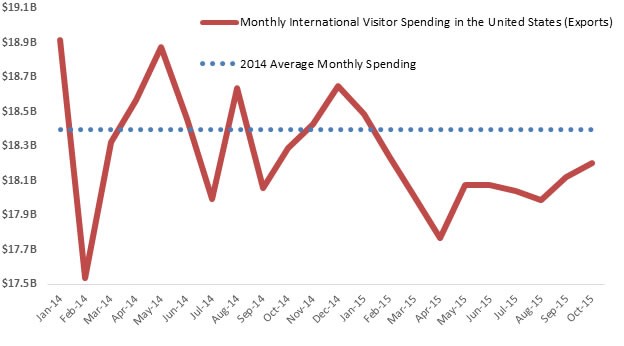 Source: U.S. Department of Commerce, National Travel and Tourism Office
and the Bureau of Economic Analysis.