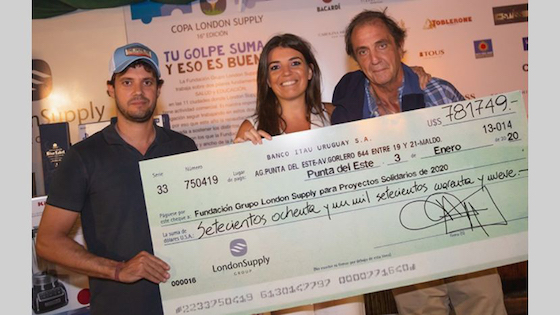 Argentine travel retailer London Supply has raised more than three-quarters of a million dollars from the 16th edition of its annual golf tournament, held at the beginning of January in the Uruguayan resort town of Punta del Este.

On top of the US$781,479 originally raised, an additional $400 was donated at the prize giving as one of the participants auctioned his prize at the award event.

The Golf Tournament continues to be one of the most important events of the Uruguay tourist season and the collaboration of the company’s suppliers ensured another successful outcome.

The money raised will be channeled via the London Supply Foundation to support school dining programs in the Barrio Primero de Mayo Educational Complex in Puerto Iguazu and another 10 locations in different parts of Argentina.

Integral health programs will also be maintained for pupils in the educational establishments assisted by the Foundation.

In addition, the Foundation will continue with construction work at the Las Gaviotas Provincial School in Ushuaia in Tierra del Fuego, to give the school a permanent base.