Louis Vuitton is the world’s most valuable luxury brand for the 10th year in a row, according to the 2015 BrandZ Top100 Most Valuable Global Brands ranking compiled by Millward Brown and WPP.

LVMH’s purveyor of luxury bags, clothes and jewelry has held the top spot in the luxury ranking for 10 years. Its brand is valued at more than $27.4bn.

The decline in luxury may be based in part to a dip in spending from China and Russia, comments Elspeth Cheung, Global BrandZ Valuation Director at Millward Brown. “Chinese shoppers are under pressure from the anti-corruption campaigns and have trimmed luxury gift giving. Russia’s spenders are suffering from a depreciation of their currency, the Ruble, and the depressed economy as a result of the sanctions imposed by the western countries.”

The result is that lower spending from China and Russia is taking its toll on the luxury sector, she says.

Chanel and Louis Vuitton have been able to beat the downward trend for a number of reasons, says Millward Brown.

“Both Chanel and Louis Vuitton are masters at doing things differently,” explains Cheung. “Chanel’s iconic, self-aware and less serious marketing, supported by edgy models like Cara Delevingne and Diane Kruger, provides a different view of femininity. Louis Vuitton has successfully revitalized its brand by going back to its original LV monogram in a new way, while other brands were leaving the classic canvas for more luxurious leather and fabrics to justify their premium position.”
Cheung also points out that LV and Chanel have harmonized their prices across regions – raising prices in Europe and lowering them in China.

“Although this will impact their financial performance in the short-term, they are protecting the brand by encouraging more in-store consumption and slowing the grey market of goods purchased in Europe to sell in China at a profit,” she says.

There are some other positive developments in the marketplace today, says Millward Brown. Today’s trend of committing to accessibility through innovations while retaining exclusivity has created an opportunity for more ubiquitous and popularly priced luxury brands like Michael Kors, which operates in over 85 countries with its own locations and in department stores. Michael Kors entered the BrandZ Luxury Top 10 for the first time this year. Tiffany, worth $3.2bn, was the second new entrant to the top ten listing.

In the overall Global Top 100 ranking of Brands, Louis Vuitton came in at number 34, followed by #2 Hermès in 55th place and Gucci at spot number 76. None of the other luxury brands broke into the Global Top 10, which was dominated by Apple, Google and other technology companies.

Technology is the fastest-growing category – up 24% in the last year, the tech brands in the Top 100 are worth more than $1 trillion, nearly a third of the value of all brands in the ranking.

BrandZ is the only ranking that measures consumer brand perception along with financial data to calculate brand value. The study is carried out by WPP’s marketing and brand consultancy Millward Brown using data from Bloomberg and Kantar Retail and interviews with more than three million consumers globally.

The full global and luxury ranking is available from www.millwardbrown.com/brandz. 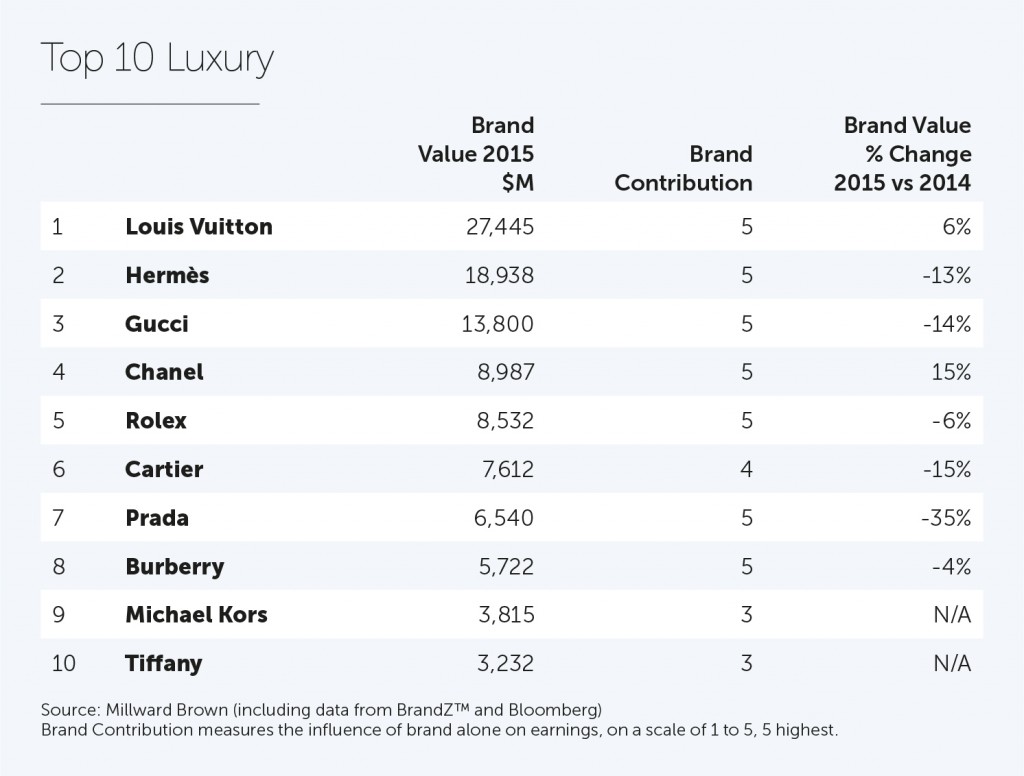