The Macallan has unveiled The Red Collection, a new range of rare single malt Scotch whiskies inspired by the significance of the color red throughout the history of the brand.

In Global Travel Retail a limited number of each of the releases will be available exclusively at The Macallan Boutiques in Dubai, London and Taiwan.

“The Macallan Red Collection is a true landmark release for The Macallan – exactly the kind of exclusive and highly sought-after series for which our boutiques are the perfect showcase. We’ve worked closely with our partners at these locations to ensure that the amazing story of The Red Collection is brought to life both instore and online, allowing whisky connoisseurs and collectors around the world access to these incredible bottlings.” 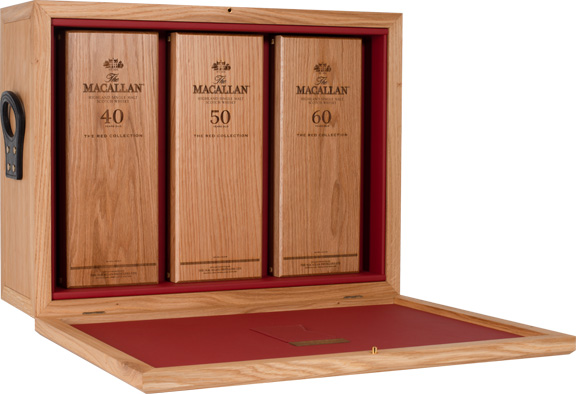 Collectors are clamoring for the Macallan Red Collection. Luxury wine and spirits retailer Le Clos, which runs The Macallan boutique in Terminal 3 at Dubai International Airport, sold more than $2 million in product within a day, eclipsing all other launch campaigns in Le Clos’ history. Throughout the pandemic, Le Clos and The Macallan have used the online boutique and direct marketing campaigns to VIP customers to deliver outstanding sales results, say the companies.

The color red has a deep and long-standing significance for The Macallan, beginning with Alexander Reid, who founded The Macallan in 1824. His surname means ‘the red one’ in Scots and was originally associated with red hair.

In 1903, owner Roderick Kemp launched The Macallan Choice Old range, which was reportedly shipped in cases labeled with distinctive red print to distinguish it from The Macallan’s existing whiskies, which featured black labeling.

In 1980, red featured strongly in the release of The Macallan’s then oldest vintages, dated 1938, 1940 and 1950. Allan Shiach, chairman of The Macallan at that time, tied a red ribbon around the bottlings to denote their age and value.

The three characters now feature in an animated film created to introduce The Red Collection in collaboration with celebrated Spanish painter and illustrator Javi Aznarez, set to music recorded by Scottish violinist Nicola Benedetti, one of the world’s most influential classical artists.

Each expression in The Red Collection is encased in an oak presentation box created from the same sustainable European oak used to craft The Macallan’s oak casks, and upholstered with sustainably sourced soft red leather from Scottish supplier Bridge of Weir Leather.