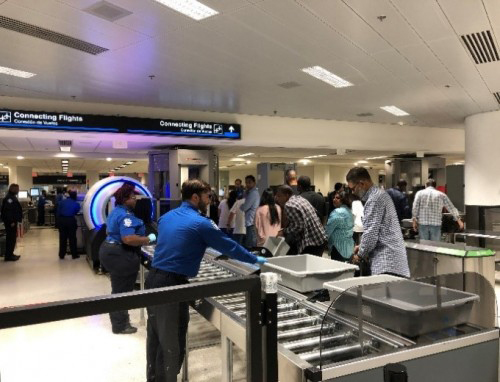 Miami International Airport is one of the first in the U.S. to install new computed tomography (CT) scanners to improve explosives detection capabilities at the security checkpoint.

Miami International Airport Director Lester Sola recently briefed the Miami-Dade Board of County Commissioners Transportation and Finance Committee on a 15-year construction plan that could cost as much as $5 billion. The plan covers construction from next year through 2035.

The new plan, which was detailed on a blog by Miami lobbyist Luis Gazitua, replaces a 2016 Terminal Optimization Program and will accommodate 70 to 80 million passengers. The airport expects passenger traffic to grow from 45 million to 77 million by 2040. The current terminal capacity is estimated to be around 60 million, but part of the space isn’t efficient, said Gazitua.

The project calls for eliminating old concourse G, but adding capacity to all three terminals. The plan would update the South Terminal with three new gates that will be able to accommodate wider-body aircraft. More retail space will be added here as well.

In the Central Terminal, a new centralized check-in hall and security checkpoint will be built, as well as a new shopping and restaurant area. Concourse F will be modernized and rebuilt, and connected behind security to Concourse E and the North Terminal.

The plan also includes expanded cargo operations, roadway additions and a new parking garage and other facility updates, as well as two new hotels (to be developed by private developers).

Gazitua wrote that $1.5 billion is already available in the next five years to build, and that the project is designed to be phased in based on need.