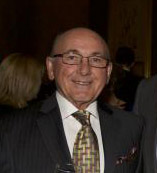 The Tourism Industry Association of Canada (TIAC) has inducted Michael Resch, Owner of DFS Ventures (Emerson Duty Free – Manitoba) into Canada’s Tourism Hall of Fame. This award is in recognition of Michael’s outstanding achievements for tourism in Canada and the Canadian Land Border Duty Free Industry.

Resch is one of only two inductee’s to this year’s prestigious award, notes Laurie Karson, Executive Director of the Frontier Duty Free Association.

“[Michael] will be officially honored at the upcoming Tourism Congress Luncheon in front of over 350 National Tourism professionals/national leaders – including the new Minister of Small Business and Tourism – Bardish Chagger. I will have the honor of personally introducing the award at the luncheon and our duty free delegation will be seated with the Minister on Dec. 2 in Ottawa,” says Karson.

“For anyone within the industry who knows Michael Resch, this comes as no surprise – as Michael’s passion, dedication and lifelong work to ensure Canada is a premiere destination is exemplary. We are very proud of Michael and his work – Great job, Michael,” continues Karson.

The TIAC introduction, reads, in part:

“Michael Resch is a pioneer of the Canadian Duty Free industry… and was the recipient of the First Canadian Land Border Duty Free License in 1982 and owner of the longest operating Duty Free in Canadian history. He assisted CBSA in developing the duty free customer regulations/ liquor license program in Manitoba.

TIAC goes on to say:

“Michael founded the Frontier Duty Free Association, which is celebrating its 30th anniversary in November 2015. In the late 1990’s, he spearheaded and lobbied the federal government for the Visitor Rebate Program to be instituted in Canada.

While this program was cancelled in 2006, the FDFA continues to lobby government for a re-instatement of a newer, streamlined form of the program, as a much needed tourism incentives to U.S. visitors.

“Working actively with Tourism Manitoba, Michael has participated in and led massive tourism initiatives to promote Manitoba and Emerson across the border in North Dakota and Minnesota.

“Michael has served on the TIAC Board of Directors for 20 years, and in 1989, received the F.G. (Gerry) Brander Memorial Award for his outstanding contributions to the Canadian tourism industry in the areas of industry awareness and tax reform.”

Congratulations, Michael Resch, from Travel Markets Insider and the rest of the duty free industry in the Americas!