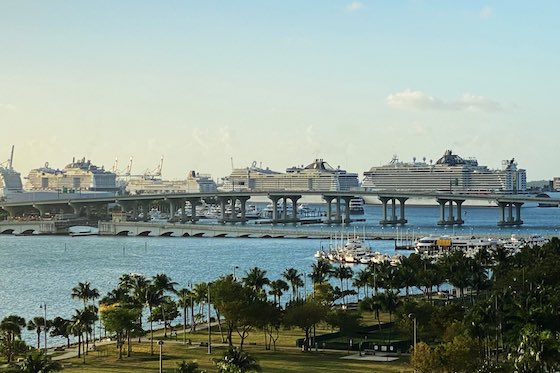 For the first time ever, all four MSC cruise ships currently based in the U.S. line up in PortMiami at the same time on March 22, 2020, following suspension of service as a result of the coronavirus pandemic.

Adrian Pittaway, Head of Retail at MSC Cruises, hosted a retail open day in February onboard the Swiss-based company’s newest ship in Miami, the MSC Meraviglia.

Some 40 local suppliers and partners such as Heinemann attended, to see the company’s newest ship in which MSC had invested one billion euros, and hear about MSC’s ambitious U.S. market growth plan. 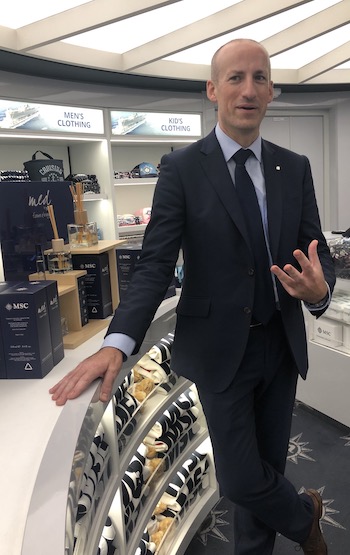 As much as 35% of MSC’s winter deployment is now in the U.S. with plans underway for further expansion and additional home ports in the region, explained Pittaway.

MSC Meraviglia officially arrived at its new home in PortMiami last November. The 4,475-passenger ship, launched in 2017, is MSC’s largest cruise ship sailing out of the United States market, and has spent the winter season cruising seven-night itineraries from Miami to the Caribbean.

The Meraviglia was also the first of the MSC ships to visit New York and had the distinction of being the largest ship ever to visit New York City when it had sailed into the harbor there in October 2019. But once the COVID-19 crisis passes, they could be a much more common sight as MSC plans to expand significantly in the region with new ships, new ports and new markets.

Although based in Europe, MSC has an increasing focus on the Caribbean and Asia.

“Our goal is to be global,” Pittaway tells TMI. In February, MSC had 5 ships in South America, 4 ships in Miami, 2 ships in the Mediterranean, and 1 in the Middle East.

But now the company is vying to grab a larger share of the North American market.

The Meraviglia, which spent two seasons in Europe before heading for its new home in Miami, boasts a number of features to appeal to Americans—from signage in English to a Cirque du Soleil at sea along with its signature Swarovski crystal stairway in the atrium. 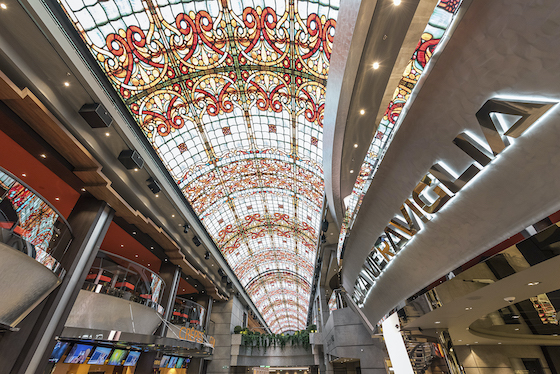 In addition to the MSC Meraviglia, the Miami-based fleet includes the MSC Armonia, which debuted there in 2018, the MSC Divina (2013), and the ground- breaking MSC Seaside, a new class of ship, which launched in 2017.

The four ships based in Miami are part of MSC’s €5.5 billion investment program to build the world’s most modern cruise fleet. The fleet is set to expand to 29 cruise ships by 2027. In 2020 the MSC Armonia was supposed to have relocated to Tampa, but with the cruise line closed for business through at least May due to the coronavirus, plans are uncertain. MSC was also looking to start its first cruises in Canada later this year.

The arrival of the Meraviglia was not the only event that marked a significant entry for MSC into the U.S., says Pittaway. The company also opened its long awaited Ocean Cay Marine Reserve, a 64-square-mile marine protected private island situated only 50 miles from Miami. Ocean Cay will become a base for marine biologists to conduct scientific research into coral restoration and Super Coral, as well as a destination for MSC guests.

“The proximity of Ocean Cay makes it such a unique part of our cruise experience and we look forward over the next years to seeing it all really grow and flourish,” says Pittaway.

On top of this, MSC is building a huge new cruise terminal scheduled to open in PortMiami in 2022. The new facility will be capable of hosting two mega cruise ships at the same time, handling up to 28,000 passenger movements per day, and will support the cruise line’s expanding presence in North America and in the Caribbean in particular.

“We will have a new cruise port, new offices, and new warehouse. It is a really integrated terminal that will create a very special guest experience. We are even working with the fast-speed new Brightline train line to create a sustainable way to bring people here to the ship,” says Pittaway.

The company partnered with the Miami Dolphins football team and Super Coral to create an ad featured during the Super Bowl that focused on its sustainability and Ocean Key. Another partnership is with Martha Stewart, who has created a number of excursions and offerings exclusively for MSC as well.

Because MSC repositions its fleet significantly from season to season, the retail program must also be flexible enough to accommodate different nationalities, says Pittaway.

“In winter, we have 35% of fleet in the Caribbean, 26% in South America, 15% in Europe, 12% in the Middle East, 6% in Asia and 6% in South Africa. But our summer deployment is very different— with 61% in the Med, 19% in the north of Europe, and only 4% here in the Caribbean. In the summer our goal as a European cruise line is to focus on our core European market. This means that all our ships have a level of flexibility that allows us to adapt our retail offer to the changing guest profile.”

MSC, one of only two cruise brands to handle its retail in-house, does this by using direct partnerships and a program that revolves around the experience, says Pittaway.

“Instead of calling it travel retail we call it experience retail. We use events and activations, unique collections, knowledge and trust built up during the course of the cruise, and quality and relevance, making it all an integral part of the cruise experience.

“This is a process: we use presentations and spend time to build guest trust in the sales team, and back it up with events and promotions. Our cruise retail offering is in continuous evolution and what motivates the passenger to buy can be very different depending on where you are in the cruise schedule. It is a very different model than in an airport, and we look forward to see how we can develop it further in the future.”

Pittaway and his teams are looking forward to launch the MSC Seashore in 2021, which will have much more space dedicated to retail, as well as a huge beauty offering, along with accessories and a fashion boutique.