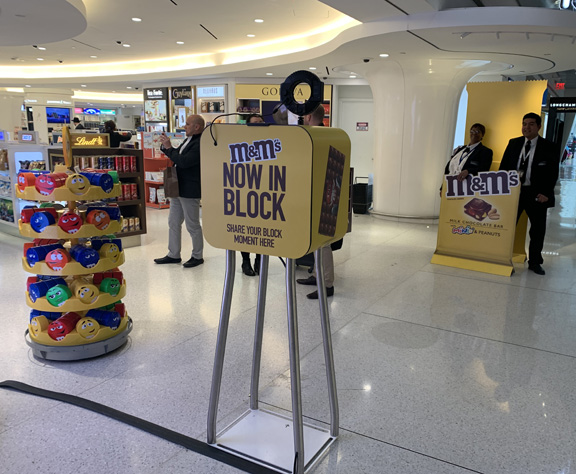 One of the M&M’s Blocks POS displays featured in a Paradies Lagardère store in JFK Terminal 4.

The campaign for this key product in its portfolio began on December 19, 2019 and is running throughout the first quarter of 2020.

It involves activations in Terminal 4 with Paradies Lagardère, So Chocolate and Chocolate & More shops. In Terminal 1, MITR is carrying out M&M’s Block promotional activity with International Shoppes. 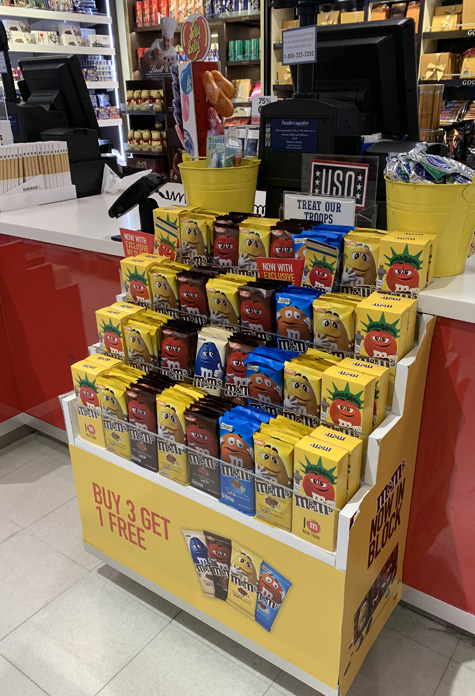 Mars’ high profile, fun activation at Chocolate & More at JFK Terminal 1 at the front of the store is only one of various programs introducing M&M’s Blocks in US travel retail this month.

All of the campaigns feature a Buy 3 Get 1 Free offer, with a limited-edition and travel retail-exclusive New York artwork sleeve to cover the bundle of four M&M’s Block.

With Paradies Lagardère, MITR is using a diverse range of fixtures to give M&M’s standout shelf appeal; at Chocolate & More there is a prominent display at the front of the store (with a movie playing alongside) and at the counter; and at So Chocolate MITR has taken the high profile activation (HPP) pillar to promote M&M’s Block in the center of the store.

At Terminal 1, an M&M’s Block photo booth was installed at the entrance to the International Shoppes store in February. Nearby is an M&M’s Block stand with ‘bubble speeches,’ where customers are encouraged to take pictures and share them on social media.

This activation is an excellent example of MITR’s drive to create fun for, and engage with, the traveler, says the company.

In March, International Shoppes will introduce M&M’s block ‘nesting tables’; and the IS store in JFK Terminal 8 will install M&M’s Block counter displays adjacent to the checkout.

The various M&M’s Block activations have been developed in close partnership with MITR’s US travel retail distributor, Otis McAllister.

Mars ITR category director Raghav Rekhi said: “This range of activations for M&M’s Block is a great way of creating fun and engagement with our customers at what is one of the most important airport locations for MITR in the US. It has been a pleasure working with the various retailers to create these promotional displays at JFK.

“There is a great spirit of co-operation with those retailers in introducing activations that create a buzz around the confectionery category in travel retail. It is proving to be a fantastic way to introduce M&M’s Block as a key element of our confectionery portfolio in airport store locations.” 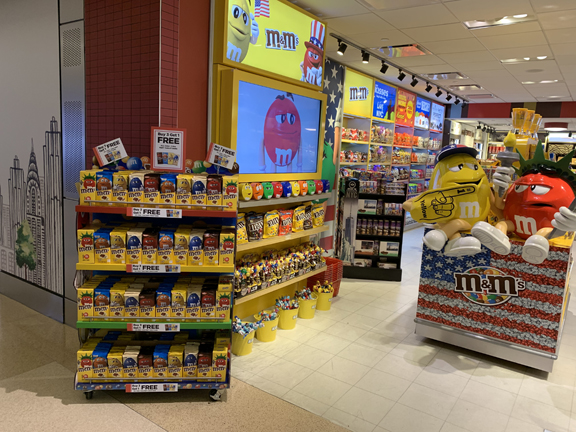 Mars has also taken over the entrance of the International Shoppes store in JFK Terminal 1, with an expanded program launching in March.

M&M’s Block is a key product that will be introduced to US travel retail buyers by MITR at the Summit of the Americas at booth 611(regional distributor Otis McAllister).